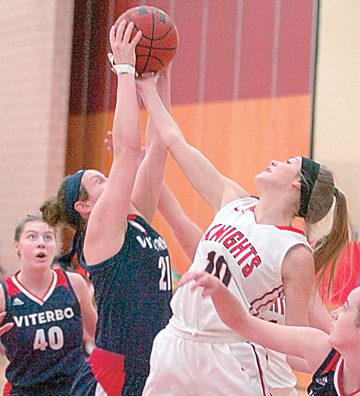 Staff photo by Steve Muscatello Martin Luther College’s Erika Gosch (10) reaches for a rebound during the first quarter of the Knights home game against Viterbo Tuesday at MLC in New Ulm.

Emily Witkowski led MLC with 12 points and she finished with six rebounds. Ally Platzer added eight points off the bench.

The Knights dug themselves an early hole in the first quarter, falling behind 19-3 after the V-Hawks went on a 15-0 run. MLC’s lone basket at that point was a 3-pointer from Witkowski. The Viterbo run ended at the buzzer after Platzer hit a 3-pointer at the buzzer to make it 19-6 after one quarter.

Witkowski hit another 3 to open up the second quarter for the Knights, but MLC soon found itself down 25-9. The Knights scored five straight points at that point to trail 25-14 after a basket by Cassandra Rose, but the V-Hawks went up 31-14 after a steal and a layup by Madison Doerr late in the half.

The Knights committed 17 turnovers in the first half and finished the game with 27 that led to 30 Viterbo points on the other end.

The Knights will return to action on Saturday when they host UW-River Falls in a game scheduled to start at 2 p.m.