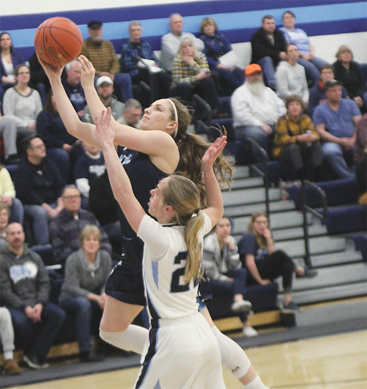 Riederer led the Chargers (19-6, 13-3) with 26 points, knocking down six 3-pointers along the way. She also had three assists and three steals, while Maddie Pearson had 9 points, six rebounds and six assists and Mia Johnson added 7 points.

Before the game, MVL celebrated its four seniors (Abby Nelson, Emma Nelson, Maddie Pearson and Sarah Kramer) in their final regular-season home game. While the MVL seniors impacted the game in many different ways on Tuesday, it was the sophomore guard Riederer that had the hot hand and led the Chargers in the scoring column, something MVL head coach Rollin Timm was glad to see.

“We’re very happy that she had that game,” Timm said of Riederer. “She’s been having a little bit of difficulty and this was nice to see. She is a great shooter when she relaxes and lets the game come to her … and it works when we can move the ball around and kick it back out, and she was open. And I think some of the other shots, everybody was shooting fairly well from the outside tonight which was nice to see.”

After a deep jumper by Heiling had the Cougars up 4-2 early in the first half, MVL went on a 12-1 run to lead 14-5, getting a pair of 3s by Pearson and a 3 each by Riederer and Anderson. Sullivan then knocked down a 3 to stop the Cedar Mountain scoring drought, but the Chargers stormed back with a 17-0 run to lead 31-8 with less than eight minutes to play in the half.

MVL’s run ended after the Cougars went on a 7-0 run to cut their deficit to 31-15. During the brief Cedar Mountain run, Smith hit a 3 and a jumper, while Sullivan added a layup.

A 3 by Heiling opened the second half before MVL answered right back with a free throw from Riederer and a 3 by Pearson. The Chargers led by as much as 37, 62-25, after a pair of free throws by Olivia Merseth later in the second half.

The Cougars cut their deficit down to 62-32 after a late 7-0 run, but that was the closest they got from there out.

After losing starting sophomore guard Kaylee Hunter for the season due to an injury she received in a recent home loss to Springfield on Feb. 11, the Chargers have had to make some adjustments. They had 13 total players take the floor on Tuesday, and Timm was happy with how the younger players filled in.

“With Kaylee being injured, we need to look at a little bit different rotation,” Timm said. “And I was real happy with what the younger girls are doing and stepping up and looking really good.”

The Chargers end their regular season in Sherburn when they take on Martin County West at 7:15 p.m. Thursday. Cedar Mountain hosts New Ulm Cathedral in a Section 2A playoff play-in game at 7 p.m. Thursday.