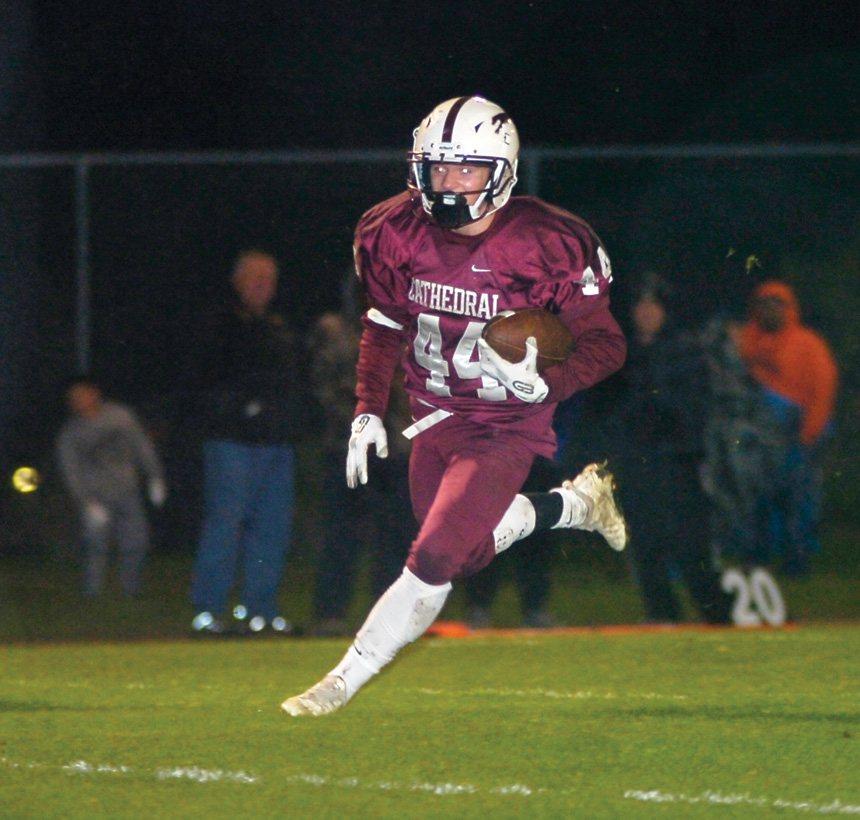 FARIBAULT — Despite having a couple of chances to come back and take a late lead, No. 5-seeded New Ulm Cathedral came up short against No. 4-seeded Bethlehem Academy 20-18 on Tuesday night in Section 2A football playoff action.

After intercepting Cathedral (2-7) quarterback Chris Knowles in the red zone for the second time of the night, the Cardinals (3-6) marched down the field to lead 18-12 with 10:43 left to play after a 92-yard drive ended with a 15-yard TD run. A 2-point run after was good and the Cardinals led 20-12.

The Greyhounds managed to get down the field again late and score on an 11-yard TD run by Eric Furth with around three minutes left, but they failed to convert on the 2-point try and trailed 20-18.

The missed 2-point conversion didn’t deter the Greyhounds, though, as they recovered an onside kick of almost 20 yards at the Bethlehem 40-yard line. Despite getting close to the red zone, a late throw was incomplete on fourth down, sealing the win for the Cardinals.

Turnovers were a killer for the Greyhounds on Tuesday night and hurt them earlier in the game also.

After starting on offense, Cathedral fumbled on its second play, giving the Cardinals the ball near midfield. The Cardinals quickly capitalized on the turnover, getting a 40-yard pass from quarterback Jack Jandro to Charlie King before Jandro rushed for a 3-yard touchdown to give Bethlehem a 6-0 lead less than two minutes into the game.

The Greyhounds got a 65-yard drive their next possession, however, finishing it off with an 8-yard TD pass from Knowles to Jon Zinniel in the corner of the end zone to tie things at 6-all. The 2-point conversion was no good.

After a few punts, the Greyhounds added another 6 points to the scoreboard on a 1-yard keeper from Knowles with 4:48 left in the opening half. The 2-point try was no good.

The Cardinals tied it up minutes later after a 55-yard drive ended on a 2-yard TD run by Josh Oathoudt, but their 2-point try was also no good. Knowles threw an interception late in the half, but nothing came of it and the score was tied 12-12 at halftime.

Jon Adema rushed for 110 yards on 23 carries to lead the Greyhounds on the ground, while Knowles completed 6 of of 14 passes for 52 yards. Zinniel had three catches for 35 yards.

The Cathedral defense was led by Knowles and Noah Wilmes, who each had 11 total tackles, and Jacob Berg, who had six total tackles and three pass deflections.