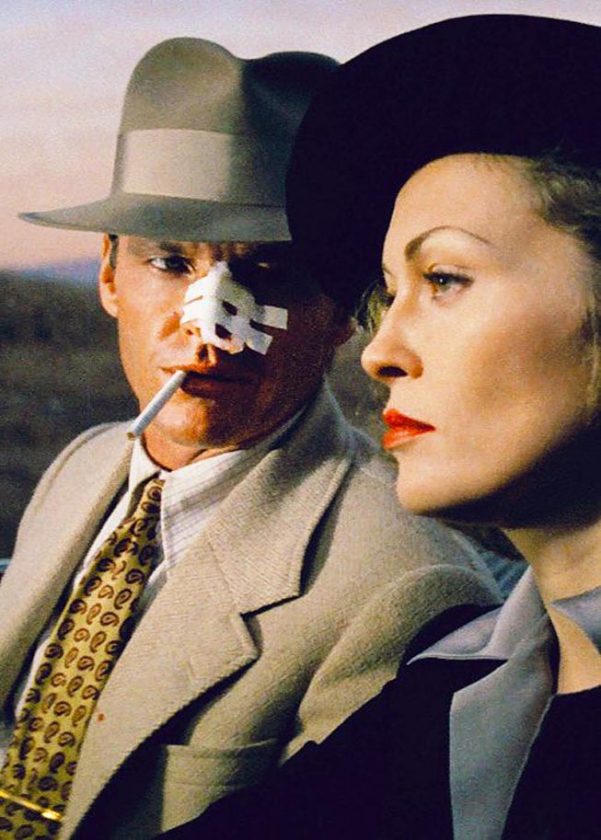 Set in 1937, the film follows private investigator J.J. Gittes (Jack Nicholson) who finds himself embroiled in a conspiracy involving water access in southern California and its link to Evelyn Mulwray (Faye Dunaway).

“Chinatown” is considered a neo-noir film because it uses the same tropes of a classic noir film and it’s set in the correct period, but with an updated 1970s sensibility.

In general, a neo-noir is any noir film created after the classic period ended in the late 1950s. When “Chinatown” was released in 1974, the classic noir period was over a decade old.

“Chinatown” does borrow from the noir style, but it needed to update the genre for the new Hollywood era. Nicholson plays the classic private investigator in over his head. Dunaway is a mysterious woman. The story centers around a crime with psychological and taboo implications. However “Chinatown” goes against the noir style by including sociological themes rather than keeping the story personal.

Starting in the late ’60s and through the ’70s, Hollywood films were pushing for more socially aware stories. The crime at the center of “Chinatown” had a large scale impact on society. The villains of the film are trying to stealing water from Owens River Valley. While the film is fictional, this plot was loosely based on a real event.

In the early 20th century several land promoters became incredibly wealthy thanks to insider land deals in the San Fernando Valley, related to a dam project. This dealing had an impact on L.A. infrastructure that still impacts the community to this day. This type of storyline would be out of place in a noir film, but it fits perfectly in a neo-noir.

The film’s darker tones are also reflective of the 1970s. Noir films have always included dark themes and less than happy endings, but “Chinatown” goes beyond the traditional fatalism. The meaning behind the movie’s title and the film’s most famous quote “Forget it, Jake. It’s Chinatown,” is that the world is corrupt and there is nothing good people can do about it. J.J. Gittes might be able to solve the case, but the bad guys have already won.

“Chinatown” is often praised for its screenplay written by Robert Towne. In writing “Chinatown,” Towne crafted a near-perfect example of a noir mystery. The script sets up a classic three-act mystery.

The first act establishes the main character, Gittes, and a simple task that is resolved in the first act. The second-act begins with Gittes realizing his investigation is a sham and the real case is much more complicated. After some detective work, Gittes learns the truth about what is going on, but in the third act, he learns the truth will not necessarily help him.

Every shot of “Chinatown” serves a purpose. Every line of dialogue or detail is part of the construction.

The success of the film made Nicholson one of the top actors of the era; an honor which he arguable still holds.

The film also kept the noir genre alive in American culture for future generations to explore.