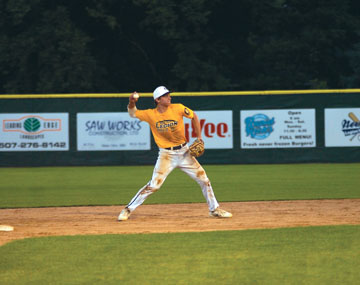 File photo by Steve Muscatello Because of the COVID-19 pandemic, there will be no legion baseball played this summer. The announcement came on Saturday that Minnesota was canceling the season and nationwide cancellation was made on Sunday.

While there were some longshot hopes that American Legion baseball would be able to be played this summer following the cancelation of the spring sports season, those hopes were quickly wiped away over the weekend.

The decision came during a morning video conference on Saturday, May 9. The Baseball Committee heard from Commander Dvorak and had input from state and national legal advisers. Statewide COVID-19 restrictions on gatherings would make playing baseball prohibitive.

“It was a difficult decision that affects many young people and their parents,” Commander Dvorak said. “The American Legion is a major proponent of the sport of baseball, and we hope to return even stronger in 2021.”

“I think the way everything was going, I think the big kicker was the announcement on Sunday, that the national level was not going to back any insurances for the year, to me that was probably the trump card knowing that they were going to cancel the legion season for the year,” Woitas said. “Just knowing that there wasn’t going to be any insurances available through the national aspect of it. I was hoping maybe we’d be able to maybe a little bit of a legion season in, I totally understand.

“I’m a little frustrated for the kids, especially the seniors that would’ve been playing their last year of legion ball, but the main thing is that we’ve gotta understand the situation we’re in and just hope we can continue to get through this and get back to some normalcy here sooner than later,” Woitas said.

Woitas said that it’s not just frustrating for the seniors, but for the juniors also. Most of the juniors are looking at their college options during the summer season and some of them would have been pursued by colleges to play baseball, but now that chance is gone. They still have a chance to be recruited next spring as seniors, but most colleges like to get their recruiting done during the summer season.

“I think for the colleges, it’s a big recruiting time to go out and see the kids, especially the juniors,” Woitas said. “I think most of their incoming classes have already been set, they’re basically losing a whole opportunity to see kids play and that was their whole opportunity. They’re losing the opportunity to watch some of these kids, especially those who were borderline and they won’t get the chance in the summer. They obviously get a chance to see them next year as a senior, but a lot of times the recruiting time is going to be done from the year before that.”

Springfield senior baseball player Mason Rummel wasn’t also too shocked. Rummel, a standout for the Tigers the last couple of years, is going to play Division II baseball at Southwest Minnesota State University next year. But he and six of his teammates won’t get a chance at one last season together in either high school or legion baseball.

“My initial reaction was I was saddened by it, I was looking forward to summer to play with my friends in the warmer weather, but I understand some things and I know that the legion was getting some pressure and stuff, they had to do what they had to do,” Rummel said. “With that, I’m just hoping that they’ll give another year of eligibility to the people that won’t be able to come back next year. I’m hoping that they’ll put in hard work for us, maybe something turns out great for us in the end, you never know.”

Rummel finished his wrestling season at the state tournament, finishing sixth overall at 220 pounds. But his fellow senior classmates on the basketball team didn’t get to finish their season. The Tigers were supposed to play New Ulm Cathedral in the Section 2A title game, but the game was canceled because of the pandemic.

In the meantime, the senior class has stayed tight despite the circumstances.

“It’s difficult, our senior class has been super close throughout our whole high school career and we’ll be talking on social media a lot, group chats that we can stay connected through, but we can’t really be together so we’re hoping once everything gets opened up, we can get together and have a good time,” Rummel said.

Rummel is still hoping that an amateur season can still be held. Both New Ulm and Springfield are hosting the 2020 state tournament and it would be devastating to both communities if the tournament couldn’t be held this year.

“I’m praying that amateur ball happens because it’s the one last thing that I can do this summer and I’m really hoping that I can go out there,” Rummel said. “I know the community of Springfield will just be excited to watch baseball if it happens.”