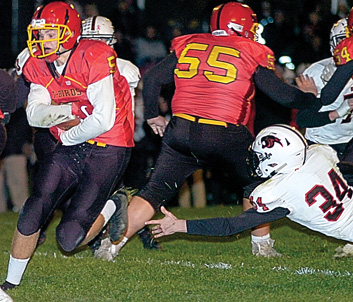 Staff photo by Steve Muscatello Evan Martin (5) of Gibbon-Fairfax-Winthrop gets past Clay Stenzel (34) of New Richland-Hartland-Ellendale-Geneva on his way to the end zone during the second quarter Wednesday in Winthrop.

WINTHROP — Gibbon-Fairfax-Winthrop rebounded from its last loss when it crushed New Richland-Hartland-Ellendale-Geneva 52-15 on Wednesday in South Central Blue football action.

The Thunderbirds (6-2) scored on their second possession in the first quarter when JC Munoz scored on a 44-yard run. Brody Hentges handed off the ball to Evan Martin for the 2-point conversion.

Three minutes later, the Panthers answered when Blake Ihrke threw a 49-yard touchdown pass to Lonnie Wilson. Ben Schoenrock’s kick for the extra point was no good and it was 8-6 GFW.

Ryan Lavrenz picked off an Ihrke pass at the GFW 47-yard line. That turnover led to the Thunderbirds scoring a touchdown when Hentges handed the ball to Martin who scored on a 14-yard run. Hentges threw to Martin for the 2-point conversion and a 16-6 GFW lead.

Ihrke tossed a shovel pass to Wilson who was stopped at the 14-yard line. Ihrke tried to throw the ball to Wilson in the end zone, but Wilson could not haul it in. Schoenrock booted a 31-yard field goal with :45 remaining in the first half for a 16-9 GFW halftime lead.

GFW put together a drive late in the third quarter. Dominic Henrichs scored on a 17-yard run with 3:16 remaining. Martin to run for the 2-point conversion, but he was stopped by the Panther defense. It was 22-6 after that score.

NRHEG took the ensuing kickoff. Ihrke fumbled when Munoz stripped the ball from him. That resulted in Martin scoring on a 4-yard run with :54 left in the third quarter. Henrichs scored the 2-point conversion via run, making it 30-9 GFW.

Ihrke kept the ball for a 5-yard gain. Ihrke tossed the ball to Bo Budach for a key first down to keep the drive alive. Ihrke threw an 18-yard touchdown pass to Nick Staloch with 11:55 remaining in the contest. Schoenrock’s kick for the extra point was blocked and it was 30-15 GFW.

Henrichs took the ensuing kickoff to the GFW 40-yard line. Two plays later, Munoz scored on a 56-yard run. Damian Hopp tried to run for the 2-point conversion, but the Panther defense stopped him. The score was 36-15.

Ihrke was sacked by the Thunderbird defense on fourth down. GFW took over the football and it engineered a six-play scoring drive. Michael Villarreal scored on a 31-yard run at the 4:20 mark of the fourth quarter. Treay Taylor ran in the ball for the 2-point conversion for the final score.

GFW’s top rushers were  Munoz and Martin, who rushed for 168 yards and 128 yards, respectively.