Eagles lose in overtime to Saints 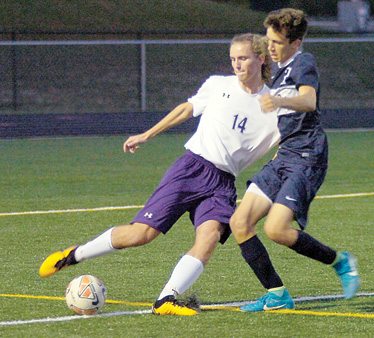 Staff photo by Steve Muscatello New Ulm’s Matthew Messenger (14) gets the ball away from Casey Osborne of St. Peter during the first half Thursday at New Ulm High School. For more photos of this event go to cu.nujournal.com

NEW ULM — In a game in which the New Ulm boys’ soccer team controlled and led most of the way, St. Peter scored a late goal to force overtime and got the eventual game-winner in the first overtime session as St. Peter defeated New Ulm 3-2 in Big South Conference boys’ soccer at New Ulm High School.

St. Peter’s Ken Ringler scored the eventual game-winning goal in the first overtime session with 3:05 left to put St. Peter ahead 3-2. The Saints improved to 7-5-1 overall and 5-3-1 in the Big South.

New Ulm’s Wyatt Huard scored twice in the first half and now has 26 goals on the season. His first goal came with 24:01 left in the half off an assist from Rob Rauh and it tied the game at 1-1.

Seven minutes later, Huard scored again, this time off of a crossfield pass from Brandon Ocampo to give the Eagles a 2-1 lead, a lead they took into halftime.

With New Ulm leading 2-1 late in the second half, St. Peter’s Rafat Solaiman picked up a rebound off of New Ulm goalkeeper Matthew Janke and put it back in the net to tie the game at 2-2. Huard had an opportunity to score late, but his shot just went wide left and it went into overtime.