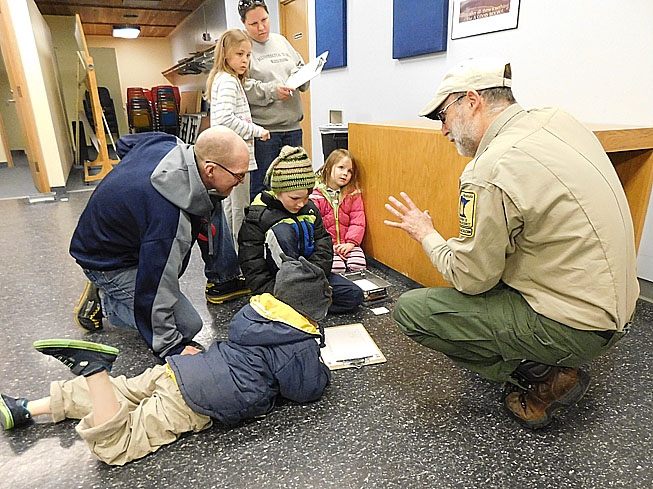 NEW ULM–Saturday morning a group of children and their parents learned the basics of identifying animal tracks as part of the Public Library’s youth programing.

The presentation was given by DNR Naturalist Scott Kudelka. Kudelka has given a similar several times each year and it always attracts a crowd.

Kudelka said there are a lot of animals in natures humans do not see. The animals view humans as a threat and run away, but they do leave behind evidence. This evidence takes the form of scat, disturbed vegetation and animal foot prints.

The foot print of the white-tail deer is the track most likely to be seen around New Ulm and was one of the easiest track to identify. The kids were able to easily identify the bison tracks as well due to its size, but Kudelka said the only bison in the area live in Minneopa State Park.

Wolf and fox can be a challenge because they look similar a dog. The main difference is size as the wolf is large. A full-grown wolf could leave a paw print the size of man’s hand.

Kudelka said the best way to tell the difference between wolf tracks and large domesticated dog is whether other prints are near. Wolf tracks are typically alone, dog tracks are often paired with human foot prints.

In the New Ulm area wolves are still rare, but coyotes are common.

The children had greater trouble identifying the porcupine and snapping turtle track.

“The porcupine is the only one not around here,” Kudelka said. “They’re located more north of us.”

In nature animals rarely leave a clean print. The smaller animals like the squirrel or chipmunk might not leave any print unless snow is on the ground.

With spring around the corner the snow will be gone, but for those paying close attention the signs are there.