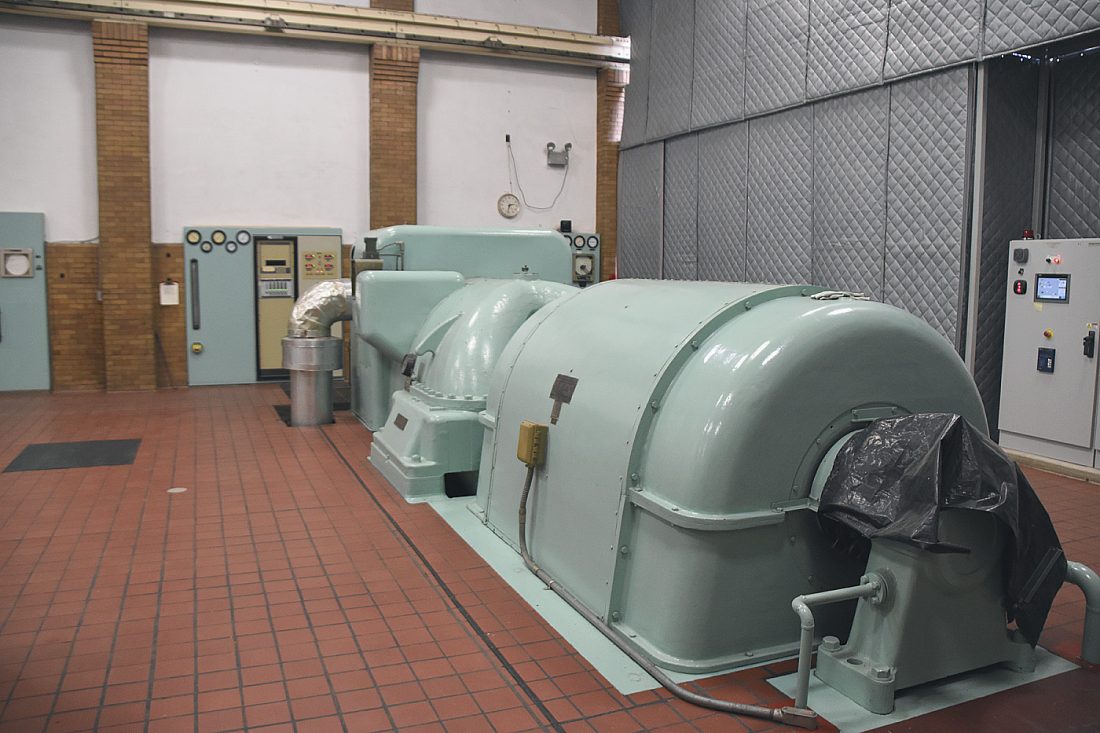 The reverse osmosis system that helps get water ready to be turned to steam.

Staff photos by Gage Cureton The control room in the electrical production plant.

NEW ULM — The Electric Distribution plant of the New Ulm Public Utilities Commission has kept the lights on in the community for decades.

Providing electricity and power to over 7,200 customers, the plant produces about 5,000 megawatts of electricity every year.

The plant has pumped out steam and electricity since it began operations in 1920. Its 16 dedicated electric department employees work in shifts 365 days a year to continually supply power to the city.

Dave Kuehn, Electric Department Supervisor and Chief Engineer, said the electric plant is continually evolving to meet electric demands and provide its services to the community.

Kuehn said he started working at the power plant in May 1979. He began as a trainee and eventually started working on the boilers while upgrading his operating licenses. He then moved to an assistant position where he remained until the former chief engineer retired in January 2018. Kuehn then took the reins as chief engineer and supervisor. 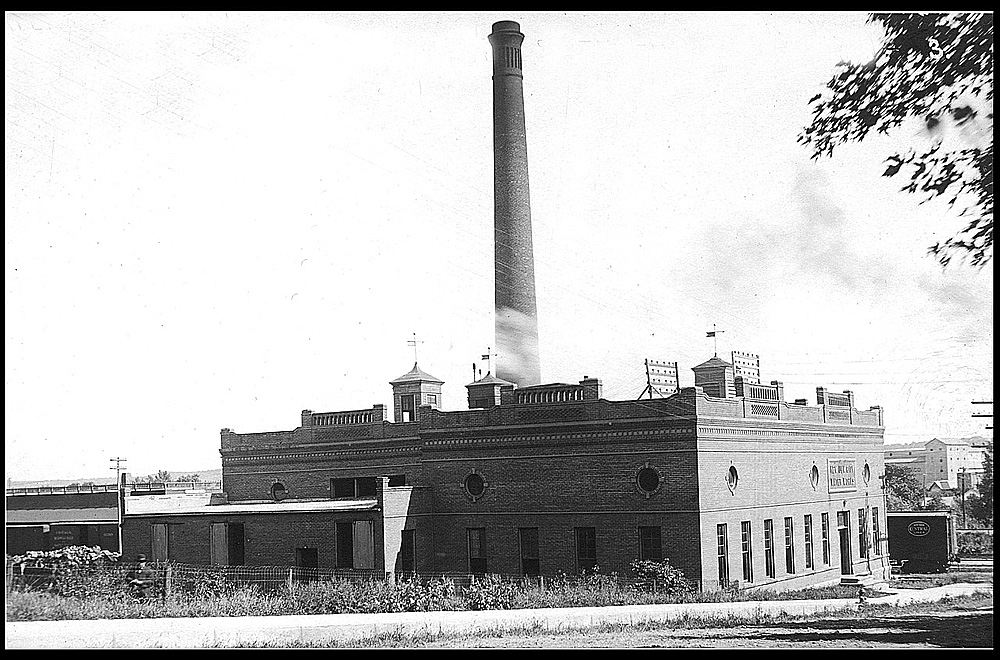 He supervises the electric plant, as well as the process, that begins with water purchased from the city water plant.

The water is ran through a filtration process that deoxygenates and purifies it to ensure equipment runs smoothly.

Next, the process continues with water running through softeners, then reverse osmosis filters. Then it’s preheated and treated where its moved to a deaerating tank, or deoxygenation tank, and heated to 350 degrees Fahrenheit.

In the boiler, water is converted to steam which travels to a turbine. This steam turns the turbine which powers a generator creating electricity. The electricity is condensed and sent to a transmission tower where it meets the city power grid. 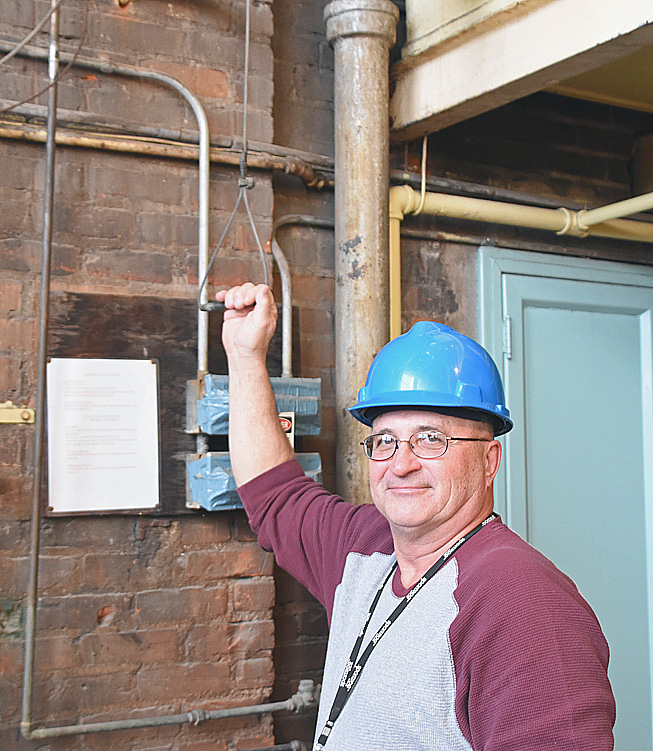 Contrary to popular belief, the whistle system isn’t automated or operated by a computer. Kuehn said every day at noon, or on the first Wednesday of the month, an employee manually blows the whistle by pulling a cable.

He said he recalls a few instances in the past where the plant has received an “angry phone call” when they missed a noon whistle.

Despite being New Ulm’s powerhouse and signaler for long-awaited lunch breaks, the present-day power plant hasn’t always been the chief supplier of electricity in New Ulm.

Like much of Minnesota, New Ulm first became electrified in the late 1890s. The New Ulm Electric Light Company, a local private company, supplied power to the community for much of the 1890s.

But dissatisfaction grew in the community with the unreliability of the New Ulm Electric Light Company’s ability to supply enough power to the growing city. 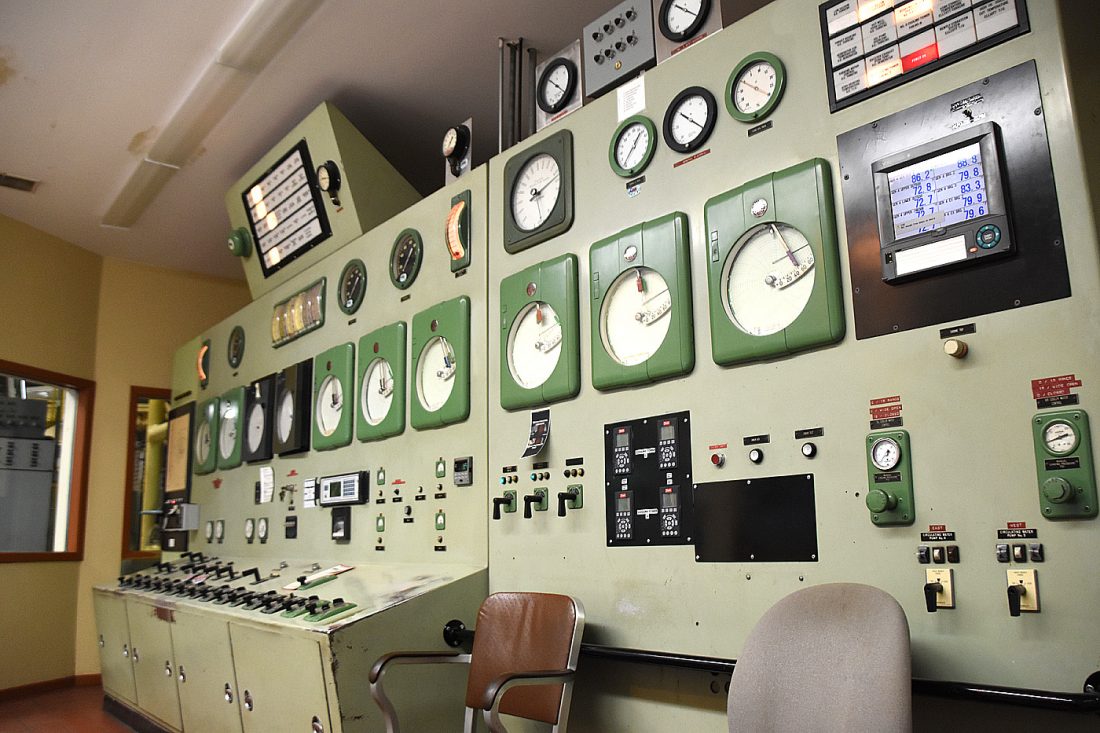 Staff photos by Gage Cureton The control room in the electrical production plant.

In 1901, the city council began considering establishing a municipally-owned electric light plant. In the spring of that year, the community voted to erect a new, city-owned power plant.

Construction on New Ulm’s first municipally owned and operated plant ended in the summer of 1903. It operated well into the late 1910s and 1920s as the community grew.

But the growing demand for more electricity, and the increase of customers in need of light, forced the city council to consider a larger plant.

Construction on the present day power plant at 310 First N. Street began in June 1920. The project was awarded to the Minneapolis-based Laurence Construction Company who bid $63,000 to erect the new plant.

J.G. Robertson, a St. Paul contractor, submitted a $145,000 bid to furnish and install all of the new equipment. 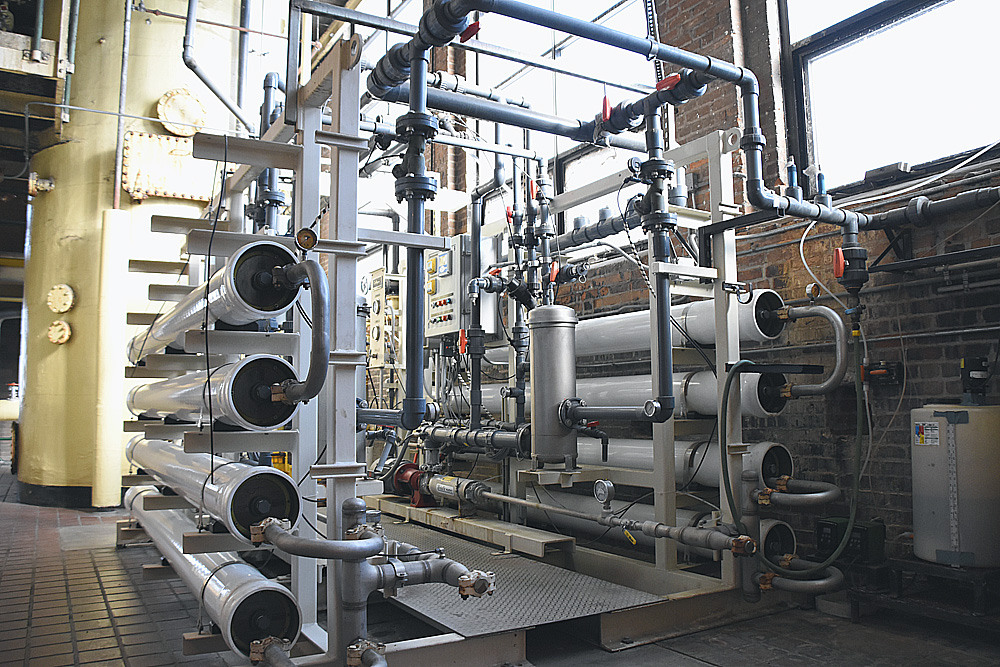 The reverse osmosis system that helps get water ready to be turned to steam.

The new power plant was completed in October 1921 and Robertson turned the building over to the electric light department. Operations began just in time for an explosion in demand for electricity.

Electric revenues for the light plant grew throughout the 1920s as New Ulm transformed into a thriving farm and retail community.

The demand for electricity would grow even further throughout the 1930s and 1940s, and the plant would continually install new, more efficient boilers and generators to accommodate the demand. New equipment would be added throughout the decades to sustain growth or changing citywide needs.

Kuehn said the power plant operates differently from the past. The days of diesel fuel and coal are long gone for the New Ulm power plant. He said the plant stopped using coal to power the equipment in 1997. Today, natural gas is the primary source of power, but Kuehn said he misses the days of dumping coal down the now unused coal chutes. 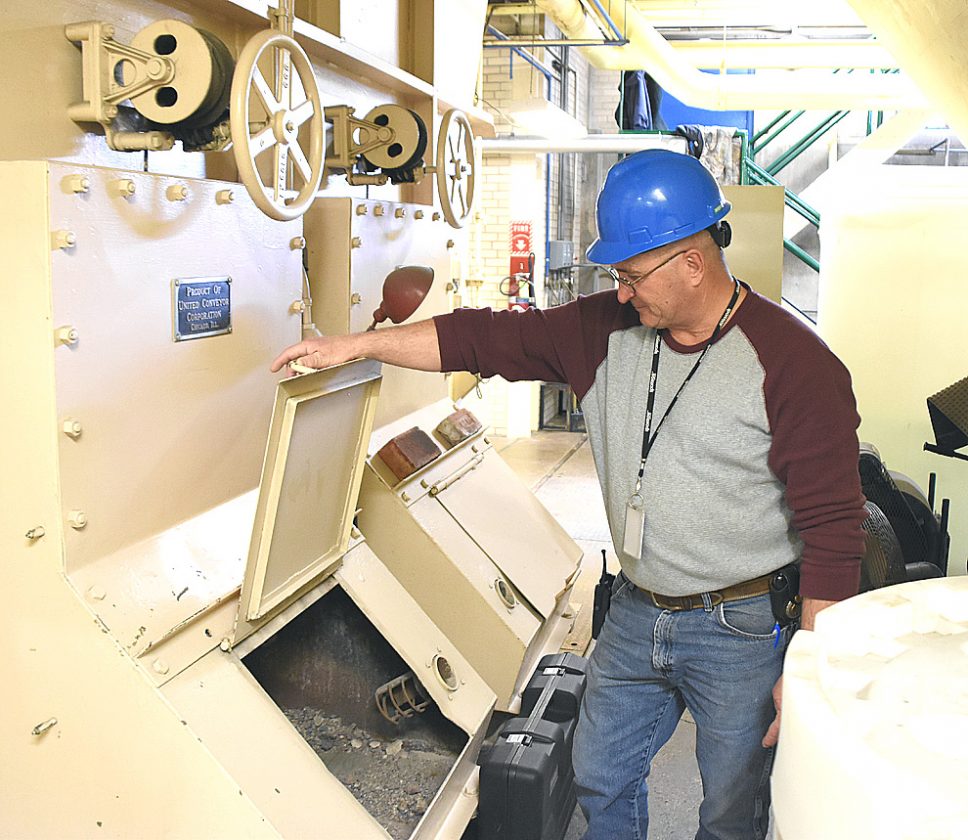 “Our operation has changed immensely,” Keuhn said. “Years ago, we pretty much had every unit online all the time. We were running flat out. Now we’re to the point with our longterm contract with [Heartland Energy] for purchased energy.”

Kuehn said it’s cheaper to purchase energy from larger power companies. If the plant ran operations full time, it could end up costing customers more to pay for utilities.

“We’re locked in so much with that they buy for us a day ahead,” he said. “When we do have the generators online, if we can offset costs when the price gets high, we’ll crank them up and make up the difference.”

He said his and the electric department’s main goal is to continually practice “fiscal responsibility” and “learn to generate as cheaply as possible.”

Rod Marshall, Utilities Director of the New Ulm Public Utilities Commission, said the power plant will continue its goal to maintain equipment to remain in service to the community and provide low cost energy.

“The power plant has been a cornerstone of our community for a number of years,” he said. “As we look to the future, maintaining our assets have the potential to keep our utility costs low.”

Special thanks to New Ulm Public Utilities Commission and Elroy Ubl for photos and information.