The show will go on for State Street Theater Co. 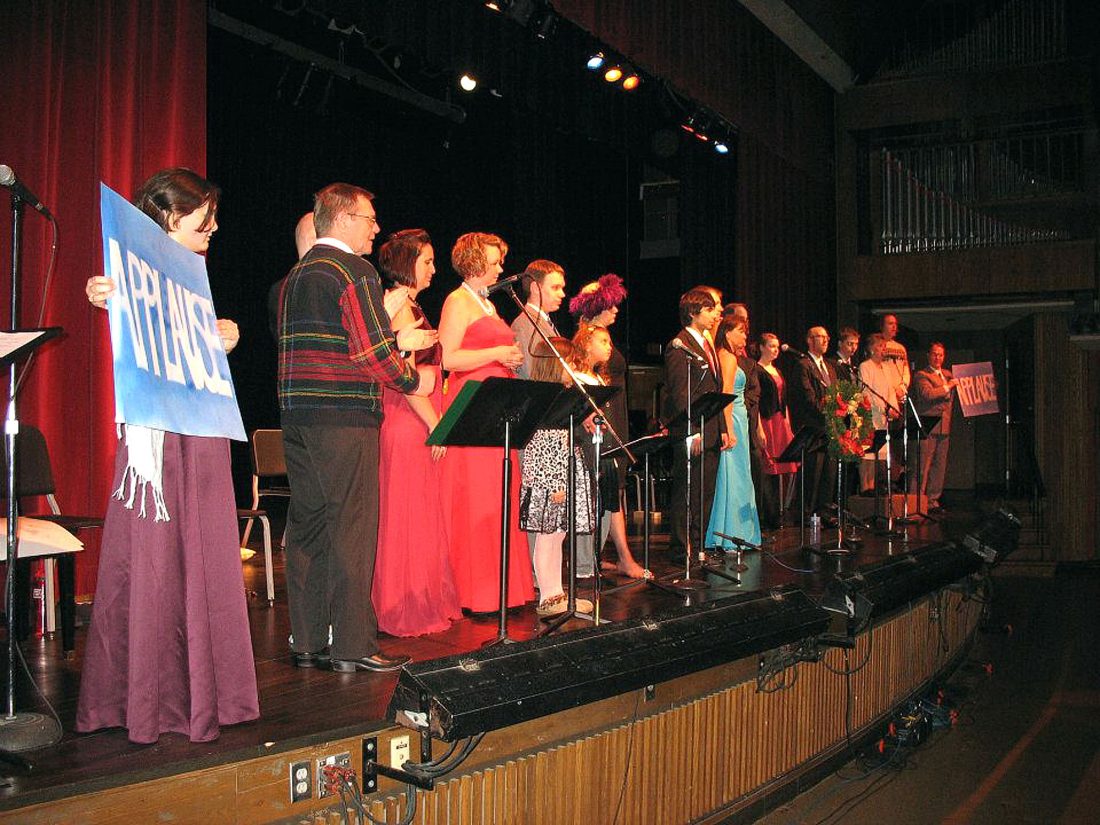 State Street Theater has held several Live Radio performance over the years, including “It’s a Wonderful Life.” The voice actors all stand on stage to read lines. The up coming production of Sherlock Holmes will be similar, but the actors spread further apart on stage.

New Ulm area siblings DD & Roscoe will play the Steps of State Street. The duo are a local favorite among bluegrass fans.

State Street Theater has held several Live Radio performance over the years, including “It’s a Wonderful Life.” The voice actors all stand on stage to read lines. The up coming production of Sherlock Holmes will be similar, but the actors spread further apart on stage.

A group of “Transylvanians” perform as part of last year’s shadow cast screening. A new shadow cast will be perform this year with a few returning actors, but staging will be blocked for the COVID era.

The Front steps to the State Street Theater will serve as the stage Saturday. The theaters first live production since COVID will be held outdoors. Audiences may watch for the theater front yard area.

NEW ULM — The shows must go on, but with a safe and measured approach. After months without shows, the State Street Theater Company (SSTC) is easing into hosting live performances again.

Music on the Steps

The first show will be a free outdoor concert called “Music on the Steps.” As the name suggests, the event will be held from the front steps of the State Street Theater. The concert runs from 4-8 p.m. Saturday, July 25. The evening will feature performances from Crista Bohlmann, DD & Rosco, Machiko and The Divers.

Audiences are encouraged to bring blankets and lawn chairs to view the evening concert. SSTC asks visitors to maintain social distancing by sitting six feet from other groups or families. Hand sanitizer stations will be set up throughout the area. The 507 Food Truck and The Lemon will also be parked near the show to provide concessions.

SSTC Board Member Dan Kalk described the concert as a soft re-opening for the theater’s 2020-2021 season. Originally, the theater planned a production of “Peter Pan,” but the pandemic changed the schedule. 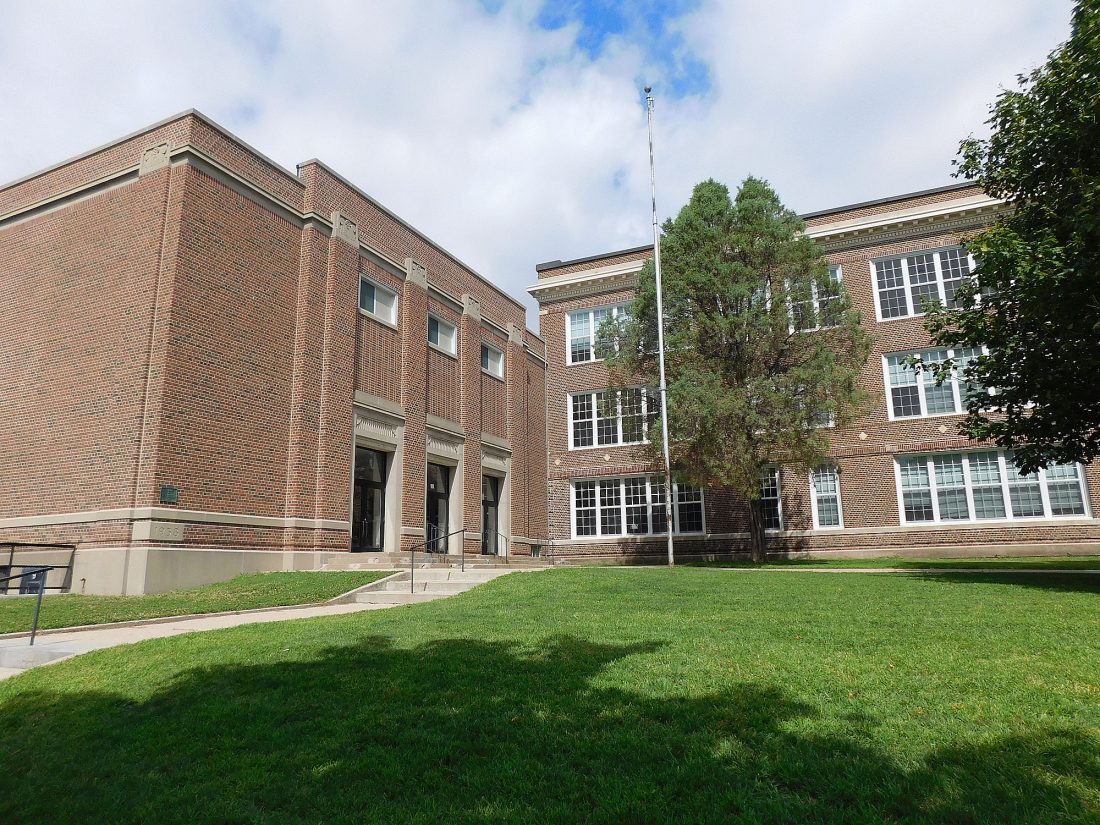 The Front steps to the State Street Theater will serve as the stage Saturday. The theaters first live production since COVID will be held outdoors. Audiences may watch for the theater front yard area.

“We do plan on reopening, but the COVID made us all pivot a little,” Kalk said. SSTC has is working through options to safely hold events. An outdoor concert allows for an open-air environment and for social distancing. It is also a way to bring live music back to the community.

Kalk said SSTC is committed to being a regional theater. Two of the four bands are from Mankato. SSTC has a history of bringing talent in from outside New Ulm. Every year the Mankato Ballet Company performs in the theater. Production actors come from all surrounding zip codes.

One of the goals of Music on the Steps is to let the community know the theater is still here, but also a fundraising opportunity.

The theater is still seeking sponsors for upcoming events. 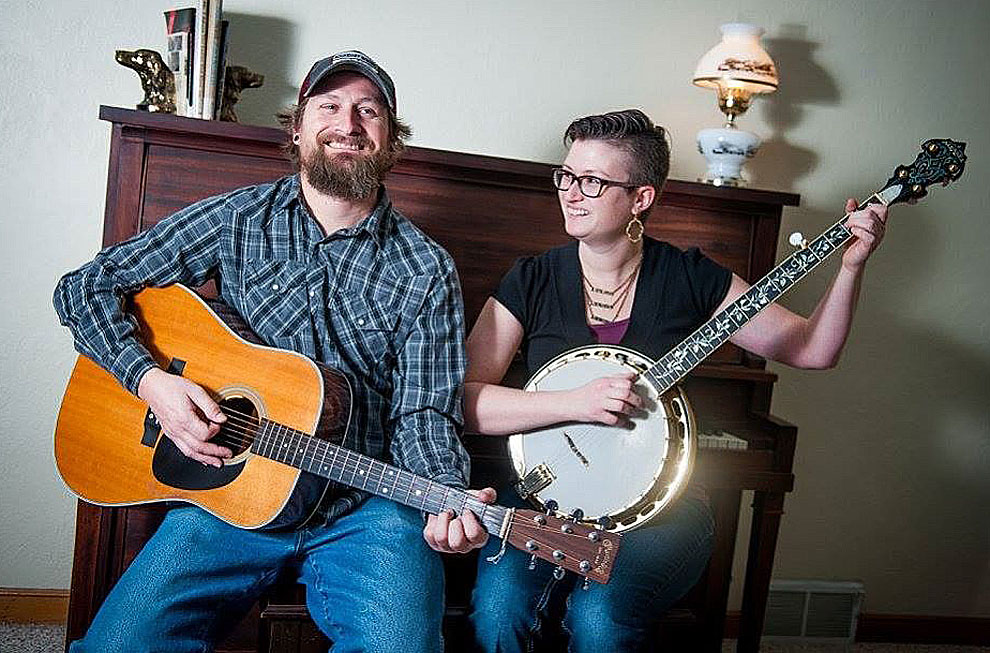 New Ulm area siblings DD & Roscoe will play the Steps of State Street. The duo are a local favorite among bluegrass fans.

Taking inspiration from the serials from the 1940s, the theater will hold a double-feature live reading of Sherlock Holmes radio dramas. The two productions are “The Adventure of the Tolling Bell” and “Murder in the Casbah.”

Both scripts were from the 1940s and have entered the public domain. This is not the first time SSTC has performed radio dramas for the stage. Past radio dramas include “It’s A Wonderful Life” and “Miracle on 34th Street” around the Christmas holiday, but SSTC has embraced radio production for the COVID era. This production will be the first live performance inside SSTC since COVID hit.

Radio play producer Christina Miller Koester said a radio drama is a great alternative to a normal play because it is easier for actors to social distance. The performance is more about voice acting. The microphones can be placed six feet apart. This show has no sets or costumes, so it does simplify some of the work. The actors do not need to memorize the script either since they will each be reading it live.

Koester’s husband Michael is directing the production. He said the radio play does not require any physical blocking but does require vocal blocking. Most of the direction is intonation. This is a Sherlock Holmes radio drama, nearly every character has an accent. A British accent is expected for Holmes and Watson, but “Murder in the Casbah” is set near Algiers adding a challenge. 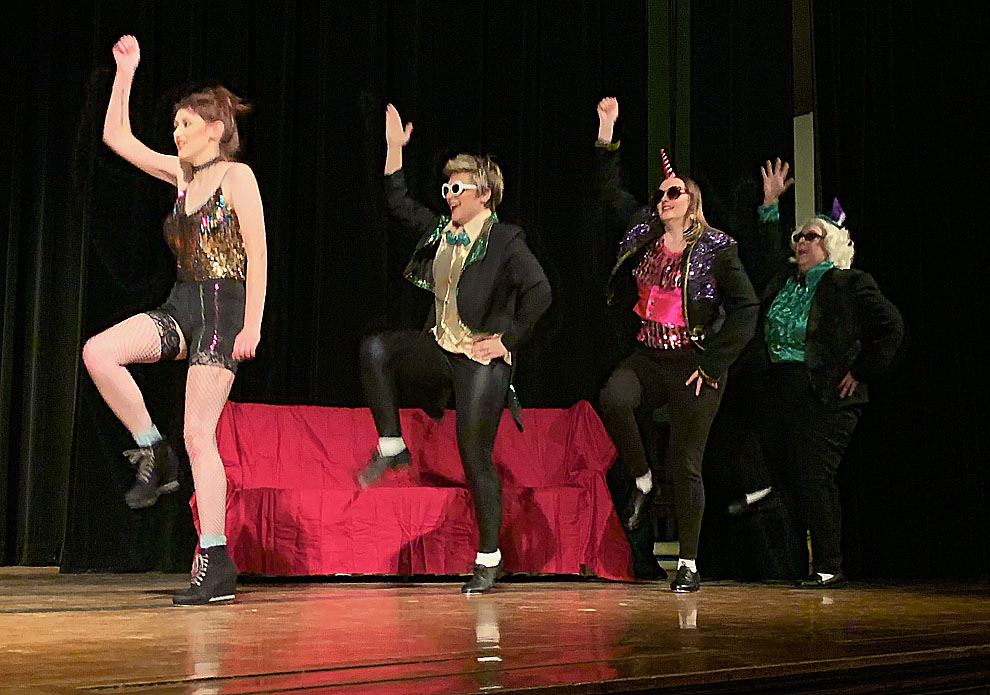 A group of “Transylvanians” perform as part of last year’s shadow cast screening. A new shadow cast will be perform this year with a few returning actors, but staging will be blocked for the COVID era.

Fortunately, Koester received numerous auditions for production. He landed a Holmes with a real British sounding accent and even found an actor who can sing in French.

Christina said they were originally prepared to do the show with four actors doing multiple voices, but enough actors auditioned for everyone to play a single part.

This production will also mimic radio sound effects. Whether it is creaking doors, steps or loud bangs, it will be done live on stage. The audience will be able to see how the sound effects are made.

“It should be interesting for the audience to see how it is done,” Michael said.

Michael will be handling the sound effects himself on stage. Timing is everything in radio production. He said as the director, it is easiest for him to time the sound effects because he knows the audio blocking.

Another interesting touch, this production will incorporate old fashioned commercial breaks. When first produced in the 1940s, these radio dramas were 45-minutes stories with 15 minutes of commercials.

For this performance, the Koesters decided to use these breaks, but replace the old sponsors with local ads. The production is reaching out to local businesses who might wish to be incorporated into the show.

Performances are 7 p.m. Saturday, Aug. 8 and 2 p.m. Sunday, Aug. 9. There is a safety plan in place. There are limited tickets on sale. A maximum of 200 people are allowed in the room. There is plenty of space in the theater for audiences to spread out and it will be cleaned between performances.

At the end of August, SSTC will “Time Warp” audiences back to 1975 for a screening of a cult musical film. This film cannot be named in print for contractual reasons, but it is the second time the theater will screen this movie.

Last October, SSTC held two screenings of this musical along with a shadow cast miming the actions on stage. The two screenings were a success and the theater decided to keep the tradition going, but with COVID, some things need to change.

“What we did in the past was in an interactive show performance, but we can’t be involved with the audience,” Shadow Cast director Lucas Youngberg said. “We’re socially distancing from the audience and actors.”

The challenge is blocking the shadow cast during the screening. Youngberg said the choreography is similar to last year but the positioning has changed. He said there will be no jitterbugs because the actors can’t have dance partners.

Youngberg admitted it to be the strangest production he has participated in. As director, not being at rehearsals in person is odd. Auditions were also conducted online with the cast submitting audition videos.

The good news is this shadow cast production is already famous for being weird. The production has decided to lean further into the weird. This is a show where it is a tradition for the audiences to throw toast and toilet paper at the stage cast. Production is not certain if audiences will want to throw toilet paper due to a recent shortage, but some will be available.

COVID requires strict cleaning protocols between performances, but this screening already planned for intense cleaning procedures. During last year’s screening, SSTC had to do a deep cleaning of the auditorium to remove all the unusual items thrown by the audience.

All screenings with the shadow cast will require audiences to wear face masks. This is a safety requirement to mitigate risk, but it is a tradition for audiences to dress up for screenings of this film. A scene in the movie has the entire cast wearing medical masks. It is not a huge “jump to the left” to require masks.

The production is keeping track of new conditions to make sure it is safe to hold the screenings. Back up dates are in place if needed.

There will be pre-movie games, “Mistress of Ceremonies,” and a shadow cast starting at 7:30 p.m. Patrons are encouraged to dress as their favorite character from the show and participate along with the movie. Rice and water guns are prohibited.

There will be a limited number of tickets available at the door, so patrons are encouraged to purchase early. Doors will open at 7:15 p.m.

The “Slab” event will begin at 7 p.m. and include appetizers, one themed drink, early entry to the event. Tickets are limited by COVID guidelines.

Off the Shelf: Connecting with animals in times of uncertainty

Home schooling and extra time spent with family because of coronavirus health rules have created a demand for maps, ...

I hope everyone is doing ok during these strange times we are living in. In honor of August - National Wellness ...