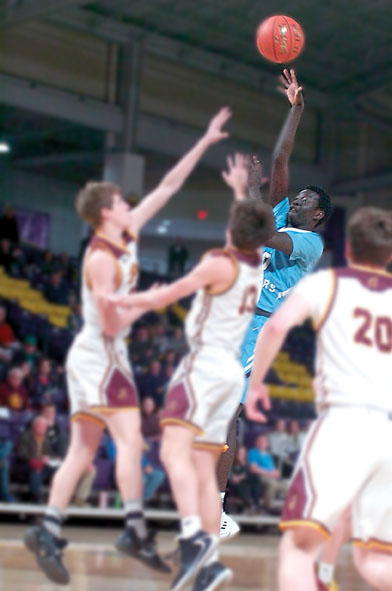 NEW ULM — Prior to his senior season, Minnesota Valley Lutheran senior Dunwa Omot realized that he wanted to take on more of a leadership role after his teammate Jake Kettner graduated last spring.

So Omot, who was already one of the most complete players in the area, stepped up his game even more. His presence was one that every team the Chargers played against was one that had to be accounted for, but even that didn’t seem to stop Omot.

The senior averaged 21.3 points, 4 rebounds, 3.9 steals and 3.6 assists per game for the Chargers, who finished the season 26-3. He also was one of the top shooters in the area, hitting 56 percent from the floor and 44 percent from 3-point range.

Omot’s leadership, athleticism, basketball IQ and all-around game earned him the 2019-20 All-Journal Boys’ Basketball Player of the Year as voted on by The Journal’s Sports Writing staff.

Omot took over the leadership role this year for the Chargers and he didn’t disappoint. The Chargers lost to Springfield in the Section 2A championship game last year and he was back with a talented senior class to make another run this year in the tough Section 2AA tournament.

“I knew losing kind of left our bad taste in our mouth in the section championship against Springfield (in the 2018-19 season),” Omot said. “This year, we wanted to play each and every game like it was our last. I kind of took that leadership role with all the seniors and I think we did a good job of stepping up.”

While his stats are impressive, it’s not the numbers that are most impressive about him.

He was called up to varsity halfway through his sophomore year and it became evident that he was going to play a key role for the Chargers right away.

“We watched him in his JV season and saw what he could bring to the team,” MVL coach Craig Morgan said. “I thought that we could use him up on our level too. He was very attuned to the game of basketball, what was going to happen, defensively and offensively what we were doing. He had a good basketball IQ and he could shoot the ball very well.”

That basketball IQ led to him being one of the more disruptive players defensively in the area. His quickness and awareness helped him disrupt the opposing offense, often times by him getting his hand on a pass or even the shot. It became tough for offenses to be too aggressive when he was on the floor, because he seemed to be a step ahead of everyone else.

But his first priority was always helping his teammates get into better situations.

“I could be aggressive on both sides of the ball, making my teammates better is a priority,” he said. “They feed me the ball when I’m hot but when they’re getting it going, I like to give them the ball. They’re the best teammates in the world to have and it was fun to play with them.”

Morgan said that Omot was able to use his natural ability and his knowledge of the game to his advantage.

“He’s studied the game and he can anticipate what’s going to happen,” Morgan said. “Instead of reacting, he can force things to happen.”

This year, Morgan challenged him to become more of a leader and Omot took it and ran.

“Over the course of time from when he came up his sophomore year, I said ‘you’re not coming up just to pass the ball to any of the upper classmen.’ We brought him up because we knew he could score and he could do things well,” Morgan said. “This year, Dunwa has taken that leadership role even more. He’s talked more and he’s talked more to the individual guys. He’s a quiet leader and unless you ask him, he won’t say much.”

Omot, who played with Kettner for almost three full seasons at MVL, finished his career with 1,157 points. He and Kettner (1,821 career points) teamed up to become one of the area’s most feared and most athletic duos. The two were constantly playing basketball and it showed in both of their games.

“Those two guys played off each other well because they played a lot together,” Morgan said. “Plus they played the game a lot. During the offseason, they played basketball every day. It was part of them and that made their instincts with what each other were going to do, second nature.”

Omot was one of the best shooters in the area. But he didn’t have to score to be the most dangerous player on the floor. His passing and his playmaking ability created so many opportunities for his teammates and the opposing defenses were focused on stopping him, creating better chances for those around him.

“His teammates rely on him, he studies the tapes we have and he sometimes becomes a decoy that other people have to watch him, and that frees up someone else,” Morgan said. “There are times where he would rather pass the ball and make a good pass and have someone else get the points. At times, you have to tell him that we need him to score.”

This past season, the Chargers moved up a class to AA. That meant they were one of the smaller schools enrollment-wise in Section 2AA, but they still made it to the North Subsection championship game, where they lost to Jordan.

Omot said that the senior class was a close group and it was tough to absorb that loss for all of them.

“On and off the court, we were friends,” Omot said. “I think our chemistry, it helps us play real well and help each other. We know where each other are, we know what cuts we were going to make, I think that helped us a lot, especially on the offensive end. And on defense, getting out and running was part of our game this year so I think our connection together worked really well.”