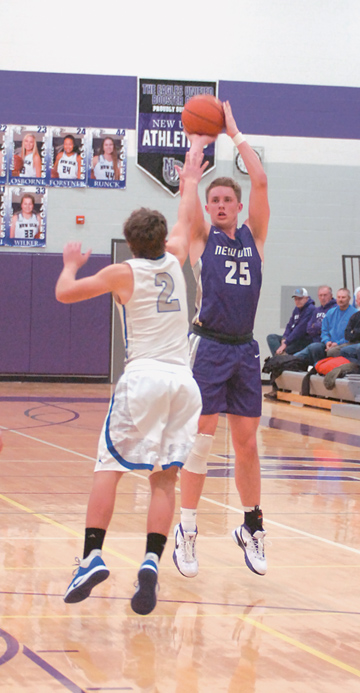 NEW ULM — When Reece Melby was a sophomore on the New Ulm High School basketball team, he saw then senior Connor Foley become the All-Time boy’s career scorer when he broke Luke Schmidt’s career total of 1,211.

Melby remembers thinking to himself that he hopes that he can be as good of a player as Foley.

Melby, who started as freshman for the Eagles, did not think that it was in his future to some day break Foley’s mark.

“After my freshman year (211 points), I did not think that would happen,” he said. Melby followed his freshman year with 338 points his sophomore year before having a junior year in which he admits he underachieved.

“I did not play as well as I wanted to,” he said as he ended up with 357 points. “At the end of that season I knew that I really had to start pushing myself.”

Melby used that self-motivator in the off-season by working on his basketball skills at Vogel Field House one to two times a day, he said.

“I was mainly a shooter my freshman and sophomore year because Connor was really good inside,” he said. “My junior year I did not drive a lot but this year I have been driving a lot more. And shooting more two and 3-pointers in practice has helped me a lot.”

As Melby slowly moved up the career point chart this season, he knew he was near breaking the mark of Foley, who Melby said helped him early in his career be a better player.

“When we played Lake Crystal I knew that I was two points away and I was super-nervous. I bricked my first couple of shots.”

Melby said that when he broke Foley’s mark he felt fulfilled.

“I worked so hard and I finally got it and my mom and dad coming on the court and hugging me. It made me feel proud.”