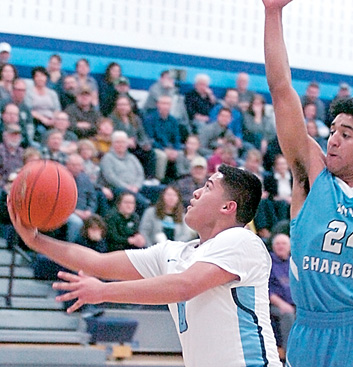 Staff photo by Steve Muscatello Cedar Mountain’s Devonte Charles gets past Kyreis Harrison (right) of Minnesota Valley Lutheran and makes a layup during the first half Tuesday at MVL.

NEW ULM — Cold shooting by Cedar Mountain in the second half and a more intense defense by Minnesota Valley Lutheran led to a 74-48 MVL win Tuesday night in a Tomahawk Conference game.

Dunwa Omot paced the Chargers (12-1, 6-1) with a game-high 22 points. Jace Marotz added 17, Mason Cox had 12 and Kyreis Harrison added 10. Omot and Cox each hauled down 12 rebounds, while Omot ended his game resume with four assists.

“It took us a while to get going,” Chargers head coach Craig Morgan said. “We were not in sync too well, but we came around in the middle of the second half.”

While the Chargers, who play at Wabasso on Thursday, came around after a slow first half, that was not the case for the Cougars, who suffered through poor shooting all game.

It was a half where Cedar Mountain stayed in the game despite hitting only 2 of 13 shots from beyond the arc.

They also were cold from the field as they made only 18 of 59 shots from the floor for 30%.

A Kyreis Harrison basket saw the Chargers up 50-39 before MVL used four 3-pointers for a commanding 64-45 lead.

“Leyton Brau came off of the bench and hit two 3s. We had a little run going there,” Morgan said.

An Omot drive to the basket made it a 70-45 game before Devonte Charles made the second 3 of the second half for the Cougars.