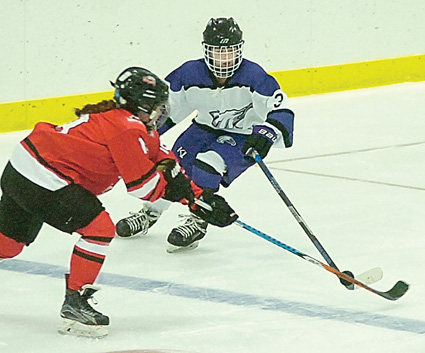 Staff photo by Steve Muscatello New Ulm’s Molly Scheid (3) tries to get a loose puck away from a Mound Westonka player during the first period Thursday at the New Ulm Civic Center.

Alexa Steffl scored the Eagles’ lone goal, with Julia Helget and Jayda Helget getting the assists.

Seventh-grader Ava Brennan made her first varsity start in the nets for New Ulm and stopped 28 of 33 Whitehawks shots.

“This was the first varsity game for a large number of players on our squad,” New Ulm coach Kristin Faber said. “I think that we looked a little nervous and shaky in the first and second periods, and some of our veterans made a couple of turnovers that we cannot have that got us stuck in our defensive zone and led to a couple of goals. But, overall, as the game went on we got better.”

Mound Westonka, who had defeated the Eagles 6-1 in the regular season and 5-1 in the Section 2A tournament last year, took a 1-0 lead at the 8:15 mark of the first period on Leonard’s first goal of the game on the power play.

The Whitehawks carried that 1-0 lead into the second period where Leonard got her second goal of the game at the 1:18 mark that came just at the conclusion of an Eagles power play.

The Eagles, who play at Rochester Lourdes next Tuesday, got on the board on Steffl’s score 40 seconds later.

But that would be the last score for New Ulm.

Two more goals from Mound Westonka in the second period had the Whitehawks carrying a 4-1 lead into the final period.

From there, Mound Westonka added another goal for the 5-1 final as the Whitehawks outshot New Ulm 38-22 in the game.

For the most part, Faber felt that Brennan did well in her first test as a varsity goaltender.

“I felt that she played very well in goal. She made some key saves for us. And it is tough playing a team like Mound right off of the bat,” Faber said. “We talked about that after the game — they are a quick team and we had to try and catch up to that speed of play. I felt we improved as the game went on and our third period was our best period. So now our inexperienced players know where we have to go.”