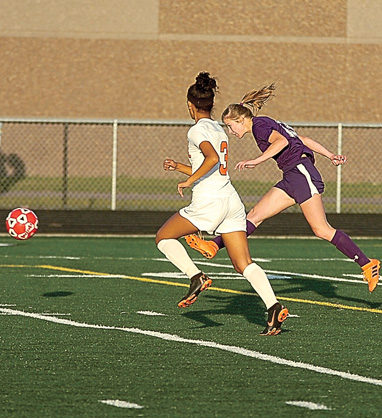 Staff photo by Steve Muscatello New Ulm’s Bekah Friedenshuh takes a shot as a Marshall players looks on during the first half Tuesday at New Ulm High School.

NEW ULM — It took a little while, but the New Ulm girls’ soccer team got its offense going on Tuesday.

Freshman Bryn Nesvold scored a pair of goals and junior Paige Kalis scored three times for the Eagles, who picked up their first win of the season.

The Eagles scored four times in the second half to break open a 1-0 game. In that first half, Nesvold scored the lone goal but the Eagles had several chance and missed out on them. The Eagles dominated the time of possession despite going against the wind but didn’t have much to show for it at that point.

“It’s frustrating when you miss out on four shots and then gain one [the goal],” Nesvold said.

After a slow start to the second half, Kalis started her string of three-straight goals when she scored at 16:35.

Kalis’ second goal gave the Eagles a comfortable 3-0 advantage and she added one more for good measure with 11:17 left in the game for her fourth goal of the season.

Nesvold finished the scoring with her second goal of the game and her third of the season when she found the back of the net with 2:03 left in the game.

The five-goal game was big because the Eagles have had plenty of chances this year but they’ve missed out on them.

“I feel like as this team goes on, we’ve been working really well together,” Nesvold said.