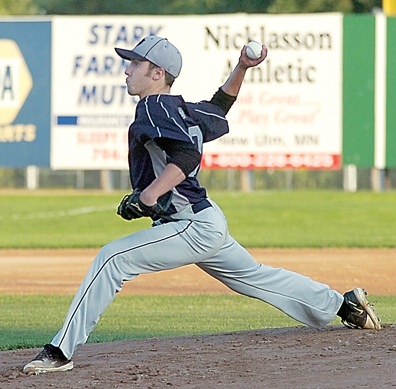 SLEEPY EYE — Sleepy Eye improved to 3-1 in the Region 2C amateur baseball playoffs with a 9-2 win over Lamberton Wednesday night.

Lamberton fell to 1-3 in the playoffs.

Lamberton struck first in the top half of the first inning with an RBI double off the bat of Johnny Pistulka for 1-0 lead.

Sleepy Eye was able to answer in the home half of the first inning, with Alan Woitas driving a double into the left-field gap to score Alex Sellner from first to tie it at 1-1.

The Long Sox pulled ahead in the third inning by scoring one run from two hits and an RBI again off the bat of Pistulka for a 2-1 advantage.

Sleepy Eye put up four runs in the fifth inning, tallying three RBI base hits with one out recorded on the scoreboard. Sleepy Eye was able to get runs by stretching the defense and scoring from a delayed steal by Matt Berkner at second base. Alan and Andrew Woitas both added RBI hits in the inning as Sleepy Eye began to find the buzz in its home ballpark.

Sleepy Eye’s Mark Schommer, draftee from Essig, picked up the win for the Indians, pitching seven solid innings and giving up five hits and two runs. He struck out six.

Sleepy Eye added insurance runs in the sixth and eighth innings to put the game out of reach. Sleepy Eye’s win came from 12 hits, while playing error-free baseball. Lamberton added eight hits to the scoreboard.

Pistulka took the loss on the mound for the Long Sox, pitching just two innings of relief as Nick Altermatt took the no decision.

Joey Walter led the Indians, going 4 for 5 and scoring one run, while Alan Woitas went 3 for 4 with two RBIs.

Lamberton hosts Stark at 7:30 p.m. on Friday for its fifth game of the playoffs.

Sleepy Eye travels to Stark at 1 p.m. on Saturday for each team’s final game of the playoffs.