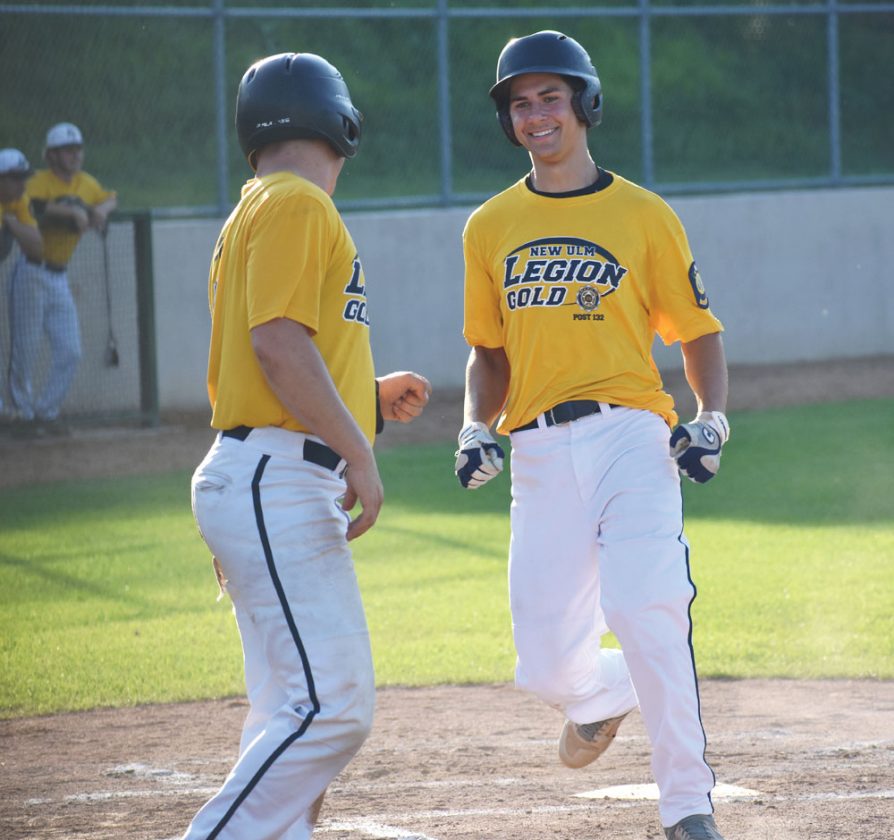 NEW ULM — After finishing second in the 96-team Gopher Classic this past weekend, New Ulm Legion Gold rolled into Wednesday night and picked up a 14-0 shutout win over Waseca at Mueller Park.

Jaden Domeier got the win for Gold (25-4). He went one inning and was followed by Josh Seidl, Chris Knowles and Hunter Ranweiler, who each got a chance on the mound, giving New Ulm’s normal starters a break after the weekend.

They combined to hold Waseca to three hits in the game.

Tyler Klingler took the loss for Waseca. He lasted one inning and gave up seven runs.

For Gold and head coach Chris Peters, the game was one where New Ulm came out relaxed and basically ended the game with a seven-run first inning.

“We put the ball in play in the first inning — we hit the ball hard — and we scored runs quick.” Peters said. “We got to relax a little bit, but we still played our game.”

Gold, who ends their regular season Thursday night at Fairmont before starting the Substate tournament here in New Ulm next week. Gold did receive the top seed in the tournament.

New Ulm had its first six players reach base before Waseca got its first Gold batter out.

Domeier walked and Teagan Kamm singled, with Domeier scoring on an error on the play. Mason Cox then drove a triple to left field and a wild pitch scored another run. Singles from Nolan Drill, Jace Marotz and Cole Ranweiler upped the lead to 5-0. An error and a fielder’s choice made it a 7-0 lead.

Gold added a run in the second before adding five more in the third for a 13-0 cushion after three innings.

“We used a lot of our pitching in the Gopher Classic playing nine games,” Peters said. “We knew some of our guys were a little tired yet, so we gave these guys an opportunity to come out, pitch and throw strikes. That is what they did.

“We did play a lot of games in a short time [in the Gopher Classic], but we will rest up and we will be ready [for the sub-state tournament] in New Ulm.”

Gold scored its final run after a pair of singles and a Waseca error in the fourth.