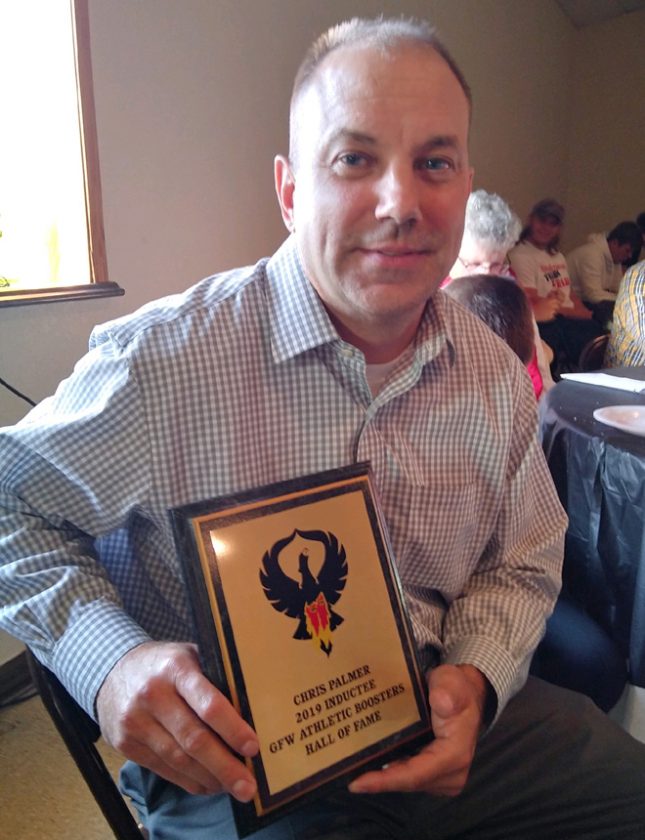 FAIRFAX — A pair of Gibbon Fairfax Winthrop (GFW) athletes who set many records during their high school careers and continue in leadership positions in their work careers, were inducted into the GFW Hall of Fame at the GFW Letterman’s Banquet Wednesday.

Chris Palmer, who competed at the state level in four high school sports, and Abby Busch, who scored more than 2,000 career points in high school basketball, were inducted.

“Success isn’t an accident. The harder I work, the more I have of it,” Zellmann said of Palmer, who received the John Gagilardi Trophy at St. John’s University, considered the Collegiate Division III version of the Heisman Trophy for Division I football players.

Now an emergency room physician and the medical director at North Memorial Hospital in Robbinsdale, Palmer asked his coaches and teammates to stand and thanked them for shaping him as a human being.

“He never dunked and never turned the ball over under pressure. We couldn’t have asked for a better sixth man on our basketball team,” Zellmann said of Palmer. “He has a load of talent. What separated him from the others is that he did extra work. In the emergency room, his patients are hanging on to life by a thread. His medical career is like his athletic career. He is ready.”

Palmer thanked Zellmann for teaching him about preparation and detail.

What many people may not know is that Palmer also had a great high school baseball career, stealing 76 bases, 37 his senior year, and hitting .370 over a four-year period.

In high school, she made the 2007 State Volleyball All-Tournament Team and made 95.62 percent of her serves. She was KNUJ girls’ Basketball Player of the year in 2008 and 2009. She also set discus and shot put records in track and field.

“She had one of the best drive steps. Teams just couldn’t stop her,” said GFW girls’ basketball coach Becky Busse. “A referee once told me they could’ve called more fouls in her favor but she was just too strong. She was a model athlete for many athletes, including my three children.”

Busch was not able to attend the event, but her mother Jody Busch read some of her thoughts on paper.

“Always have your mind set to learn behavior,” Busch said.

After decades of service, GFW cross country coach Mark Leitheiser announced his retirement at the banquet.