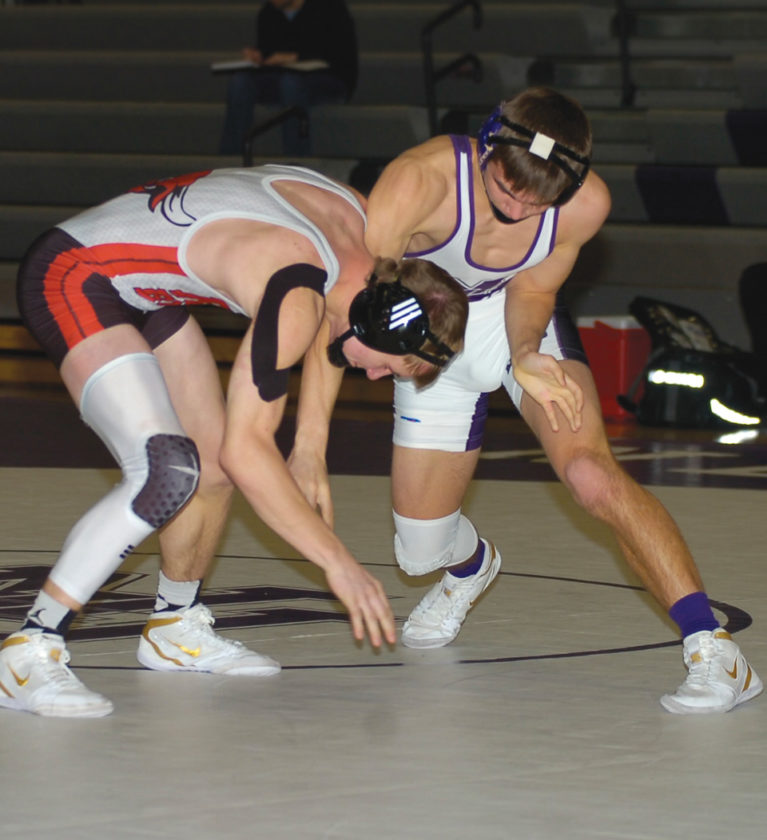 File photo by Steve Muscatello From this Dec. 7, 2018, file photo, Sean Howk takes on Fairmont/Martin County West’s Payton Anderson in a 145-pound match at New Ulm High School. Howk won the match over Anderson, who was the No. 3-ranked wrestler at 145 pounds in Class AA at that time.

NEW ULM — When New Ulm Area senior wrestler Sean Howk finished first at 145 pounds in the Norwood Young America Central Invitational this past Saturday, it didn’t just mean he added another three wins to his already impressive record on the season, where he sits at 19-1 overall.

With those three wins on Saturday, Howk moved to 184 career wins, a New Ulm High School record. He previously sat tied with Adam Hoffmann (2008) for the record at 181 wins for two weeks after suffering his first loss of the season on Dec. 22, 2018 at the Redwood River Riot against Gavin Peterson in the first-place match at 145. Peterson is currently ranked No. 5 at 145 in Class AAA.

Now, after breaking the decade-old career wins record, Howk can relax and focus on his other goals the rest of the season.

According to The Guillotine, there are currently only 113 wrestlers in the history of Minnesota prep wrestling with over 200 wins. If Howk continues the pace he’s at, 200 wins certainly looks to be attainable.

Howk originally entered this season unranked in Class AA by The Guillotine to the surprise of many. An individual participant at state four times already, he made sure to silence any doubters early on, winning 16 straight matches to open the season and stamp his name in The Guillotine’s Dec. 21, 2018 rankings, where he currently sits at No. 5.

“I feel like I got looked over a little bit,” Howk said. “But I knew that as long as I went and actually proved that, ‘Hey, I’m still around,’ I could be noticed. And I think I kind of did that right away and throughout the season.”

NUA head coach John Rieser said that although he was a little surprised by Howk’s early snub in the rankings, what matters most to him is how his wrestlers compete and finish at the end of the season.

“What I told him and what I tell every kid is that it’s great to be ranked, but I don’t put a lot of stock into it,” Rieser said. “What matters is where you end up at the end of the year. Was I a little surprised? Yeah, a little bit. But did we dwell on it? Nope, not at all. We basically said go out and beat the kids that are in front of you and that’s kind of what he’s done at the beginning of the year.”

Rieser said that in addition to Howk being one of the tougher wrestlers to score on, he also thinks Howk has improved a lot when it comes to working on his feet.

“I think one of the things he’s improved on this year is probably on his feet, finishing some takedowns that he might not have on some of those better kids in prior years, so he’s really worked on that this last year,” he said.

With Howk looking in prime shape early on in his final wrestling season at New Ulm, he still doesn’t seem quite content with where he’s at.

“I’d like to say I’m pretty high up there, but I can always get better, no matter what,” he said. “I’d just like to show that I can be on the podium at the end of the year.”

Fairfax baseball museum to have Grand Opening on Sunday

FAIRFAX — On Sunday, July 19, Memorial Park in Fairfax will have the Grand Opening event for its baseball museum. ...