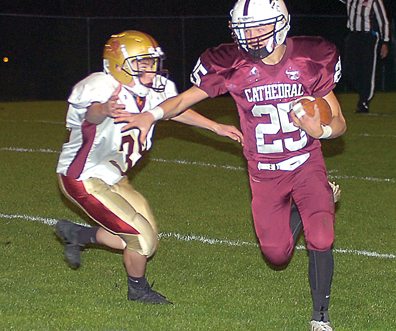 Staff photo by Steve Muscatello New Ulm Cathedral’s Jaydan Hotovec (25) gets past Kadin Johnson of Springfield during a run int he third quarter Wednesday at Johnson Field in Ulm. For more photos of this event go to cu.nujournal.com

The win means the Greyhounds (6-2) clinched a first-round home playoff game on Tuesday. They will host an opponent to be determined at 7 p.m. at Johnson Field.

The Cathedral backfield was busy yet again, led by David Berg. Berg scored on runs of 17, and 1 yard and both came in the first quarter. He also intercepted a pass in the third quarter and returned it 45 yards for the score.

Berg finished the game with 13 carries and 77 yards.

The Greyhounds led 22-0 at the end of the first quarter after Berg’s touchdowns sandwiched a 56-yard punt return by Nate Hauser.

Cathedral quarterback Jacob Manderfeld scored on a 2-yard keeper to put his team up 29-0 after the PAT, a lead the Greyhounds carried into halftime. Manderfeld had 25 yards rushing on three carries and he passed for 75 yards.

Hauser scored his second touchdown of the game in the third quarter on a 1-yard run with 8:38 left in the quarter before Springfield got on the board. Hauser had 67 yards rushing for the game.

Springfield answered with a 75-yard pass from Devin Johnson to Decker Scheffler with 8:14 left in the quarter to make it 35-7.

Andrew McClain then hauled in a pass from Manderfeld and took it 45 yards for the touchdown to give Cathedral a 42-7 lead. Berg later had a pick-six on Springfield’s next possession to put the Greyhounds up 49-7.

The Tigers used another big play before the end of the third quarter, this time when Johnson again found Scheffler for a 76-yard strike for a 49-14 Cathedral lead.

The Tigers got touchdowns from Johnson (1-yard quarterback sneak) and Scheffler (7-yard run) in the fourth quarter and they finished the scoring on a 42-yard run by Kadin Johnson with 18 seconds remaining in the game.

Colton Braulick had 10 carries for 65 yards for the Greyhounds.

Springfield (2-6) opens Section 3A playoff action on Tuesday against an opponent to be determined.