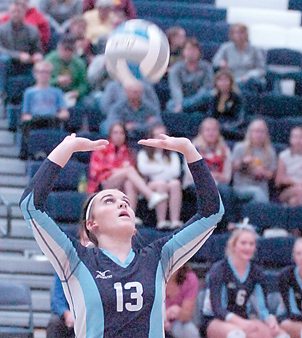 Jemmings joins Kylie Wersal as the second member of the Cougars to hit a major milestone this season. Wersal passed 1,000 career digs on Oct. 12 in CM/C’s win over Sleepy Eye St. Mary’s.

This CM/C squad is an equal-contribution team, relying on more than one or two key players to pitch in and help lead the team to a winning season. The Cougars now hold a 21-5 overall record and a 7-1 record in the Tomahawk Conference.

Cougars coach Beth Hill was proud of Wersal’s and Jemmings’ accomplishments and how the milestones add to a greater good for the team.

“Both have worked really hard to achieve this, but they definitely couldn’t have done it without the help of their teammates,” Hill said. “We’re a very balanced team and we have a good flow going right now and that’s contributing to both of their personal success and our team success as well.”

Jemmings and Wersal both echoed Hill’s comments about reaching their milestones because of an all-around team effort. Jemmings spoke highly of Wersal after the match.

“Kylie is a great back row player,” Jemmings said. “She can read the hitters really well and I am very lucky to have played with her for I don’t even know how many years.”

Wersal was happy for Jemmings after seeing her reach her own milestone and added her thoughts on how Jemmings plays the game.

“No matter if it’s a good or bad pass, Abby always hustles after it,” Wersal said. “And she can definitely get a good set off of it so our amazing hitters can kill it.”

Jemmings reached her 2,000th career set assists in Set 3 after setting up Erica Bock for a kill and a 7-2 CM/C lead.

CM/C played solid from the get-go with an early 12-1 lead in Set 1 and Set 2 saw an even more dominant performance by the Cougars. After allowing RCW a point to make the RCW deficit 7-5, CM/C finished the second set on an 18-2 run.

Wersal had 20 digs on the night for CM/C, while Katelyn Green added 13 and Makenzie Kerkhoff had 11. Kerkhoff also led in kills with 13 and was followed by Bock and Toll with seven and six kills respectively.

The celebrating may not be over yet for CM/C this week as Jordan Kevelin is also inching closer to a milestone of her own. Kevelin is five digs away from 1,000 career digs and has a chance to reach the milestone at home when CM/C hosts MACCRAY at 7 p.m. Tuesday.