Cathedral knocks off Nicollet in 4 sets 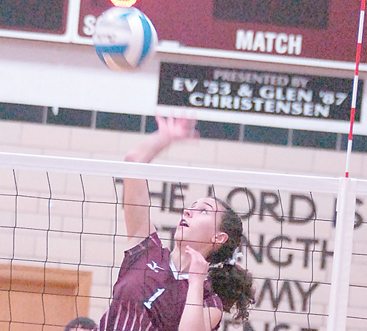 Cathedral coach Becky Wilfahrt said that her team’s hitting and passing was better during the game when it came to consistency, but she was surprised to see 11 missed serves when her squad usually misses just one or two a night. She added that her girls had eight aces on the night as a positive, however.

Wilfahrt also said that she wants to see her team play strong and remain aggressive to finish the season.

“We talk about finishing strong and staying aggressive,” Wilfahrt said. “And you saw in game three that we didn’t and that’s kind of been an issue all year. We kind of step back and we start to play really safe and that’s where we lose games. So we’re really pushing that — staying aggressive and keep going after the ball.”

Nicollet took a 6-3 lead in Set 1 after a kill by Lindsey Boerger and an ace by Hailey Stoecker. Cathedral took a 9-6 lead, though, after a 6-0 run that was capped off on an ace by Rose Hazuka and a pair of Nicollet hitting errors.

After a 5-0 run that was finished by a pair of Becca Schwarz kills and a kill by Hazuka, Cathedral led 17-11 and Nicollet was forced to burn a timeout. Cathedral continued a strong run after the timeout until back-to-back spikes by Nicollet’s Jill Thompson cut the Nicollet deficit to 21-14. Cathedral finished the set shortly after, though, despite a late Nicollet run.

Set 2 saw Cathedral jump out to an early 6-1 lead after an ace by Jenna Helget. Nicollet later trailed 11-8 after a Jessi Johnson kill.

The Raiders looked sharper in the third set, taking an 11-5 lead after a kill by Brooke Skrien. Nicollet continued its run and after a 5-0 run led 18-10.

Cathedral couldn’t get any closer than 6 points after that and fell in the third set.

The Greyhounds started up 4-0 in Set 4 after multiple Nicollet hitting errors. Nicollet later brought its deficit to 11-9 after a kill by Skrien.

The Greyhounds went on a 4-0 run after the Skrien kill, though, to lead 15-9. Nicollet battled back to get within 1 after a kill by Boerger and a Cathedral hitting error, but Cathedral finished on a 5-1 run to win the set and match.

Cathedral was led by Helget, who had 32 set assists and 28 digs, while Hazuka and Kristina Long had 17 and 16 kills respectively. Karlie Gieseke had 31 digs for the Greyhounds, while Kirsten Spaude had 20 digs.

Nicollet coach Judy Radke said that looking ahead, Nicollet might end up meeting Cathedral in subsections, so she wanted her girls to know that they had to play hard. She also said that she wants her girls to simply have fun.

“To be honest, what I tell them and what we’ve done kind of the last two matches is just have fun,” Radke said. “We don’t play well real serious, so it’s just been kind of stay loose, keep laughing, keep having a good time. But the other piece with that is there are certain things — that I call unforgivable — that we’ve got to start doing better. That’s what we focus on in practice and I was disappointed tonight there were a couple of those things that we just weren’t doing what we need to do.”

Nicole Hall led Nicollet with 24 set assists, while Boerger had nine kills and 22 digs. Thompson had 14 kills for Nicollet, while Halle Johnson and Jessi Johnson had 20 and 19 digs respectively.