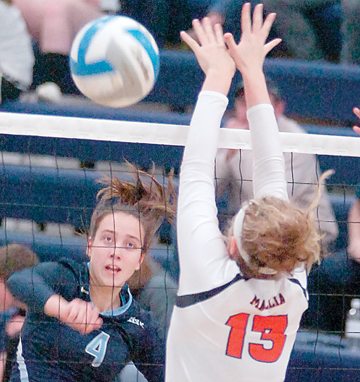 Staff photo by Steve Muscatello Minnesota Valley Lutheran’s Haley Birkholz spikes the ball past Carissa Caraway of Madelia Monday at MVL. For more photos of this event go to cu.nujournal.com

NEW ULM — Madelia moved to .500 on the year after a 3-1 nonconference win over Minnesota Valley Lutheran on Monday.

Madelia took a 3-0 win in its previous matchup against MVL last year in Madelia on Oct. 17.

Both teams have made strides this year from last season, where MVL won just two games and Madelia won six. Madelia coach Steve Schlager is happy with where his squad is at from a year ago and thinks much of the improvement comes down to passing.

“It’s just been fun to watch the kids progress,” Schlager said. “Their passing has really improved. We have so many more options with our hitters because the passing is getting up to our setter this year. We struggled a little bit with that last year — it was getting better — but this year it’s really gotten sharp. It’s shown by our hitting. Our stats are pretty balanced.”

Madelia took a back-and-forth Set 1, fending off a 7-point MVL comeback to tie it at 21-21 late in the set. The set was tied up five more times after the 21-apiece tie.

MVL looked strong to open Set 2 and took a 15-8 lead throughout the first half of the set to force a Madelia timeout. After a Madelia point brought its deficit to 19-12, MVL went on a 6-0 run to win Set 2, led by kills from Haley Birkholz and Hannah Marzinske.

Madelia looked much improved in Set 4, picking up a 9-1 lead early on to force an MVL timeout. During the run, Madelia was led by kills from Maddie Mueller, Estefany Sotelo and Alayna DeLaCruz.

The Chargers cut the deficit to 6, but were unable to pull any closer as the Blackhawks pulled away and won the set and match after back-to-back MVL hitting errors.

“We didn’t have the energy that I know the girls have,” MVL coach Sara Gieseke said. “When you start digging a hole, it’s tough to come out when you’re battling back and forth for points. We had some nice rallies and some really nice blocks, but just as a whole we didn’t play together.”

Birkholz led the Chargers with 13 kills and 11 digs, while Lauren Paulsen added nine kills and 10 digs. Marzinske had 18 digs for MVL, while Mackenzie Helget and Maddie Pearson had 16 set assists and 10 set assists respectively.

The Blackhawks were led by Lizzie Cooling, who had five aces, five kills, 21 digs and 48 set assists. DeLaCruz had 10 kills for Madelia, while Carissa Caraway had nine and Sotelo added seven.

Also for Madelia, Briana Ardolf had 22 digs and Mueller had six kills.