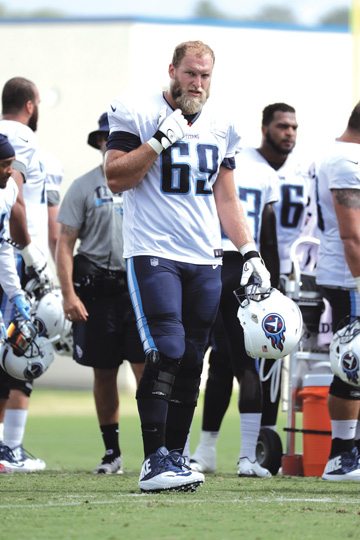 NASHVILLE — With a full year of practice squad experience under his belt, 2011 Springfield graduate and University of Wisconsin graduate Tyler Marz is back with the Tennessee Titans and was placed on the team’s practice squad on Sunday after clearing waivers.

Marz didn’t initially make the squad’s cut down to 53 players on Saturday, but he cleared waivers 24 hours later. He will start his second year on the practice squad with a team that finished 9-7 last year in the AFC South. The Titans tied Houston with the best record in the division but they didn’t make the playoffs.

Marz is a 6-foot-7, 315-pound tackle who has also played some guard for the team while on the practice squad. He is one of two offensive linemen on the team’s practice squad.

He spoke with team officials after getting cut on Saturday and he figured he’d be re-signed after clearing waivers. It was a matter of a few specifics before he re-signed, which he said is part of the business of playing in the NFL.

“In the NFL, it’s all a numbers game,” he said. “They gotta have the right numbers for the right position and usually with the O-line, it’s about 10 guys and that’s including practice squad and inactives. They usually keep eight or nine [on the roster], depending on the team so when they cut, they usually tell you if they want to bring you back and there’s still something that could happen so it’s not always guaranteed.”

Marz originally signed with the Titans as an undrafted free agent hours after the 2016 NFL draft. The 2016 University of Wisconsin graduate didn’t initially make the squad last year after the final cuts and was offered a shot on the practice squad.

Marz knew coming into the 2017 season that it would be a tough task making the 53-man roster. The Titans have made their offensive line one of the best in the NFL and it’s always a challenge for an undrafted player to make a squad. Still, Marz had the advantage this season of knowing the playbook and he was able to come back.

“I’m so much more confident, I know that I’ve improved a lot over the year, especially over the offseason,” he said. “Knowing the playbook and not having to learn anything, learning more of the details so that I know everything. I know what the receivers are doing, trying to learn formations and just becoming a better player. It’s been fun and not having to deal with the rookie stuff and nothing new, it’s a good feeling and lowers the stress level.”

While the stress level was down this year, he still was naturally a bit nervous after the cuts on Saturday just in case the organization felt it wanted to make changes elsewhere.

“It’s just a waiting game, you just don’t know what’s going to happen,” Marz said. “We signed a guy that played with us last year, he was cut from the team he was on [this year] and we signed him and ended up cutting a guy that was here throughout camp. It’s just one of those deals where you realize how much of a business the NFL is.”