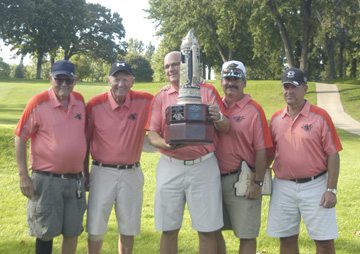 NEW ULM — In 2003, Cal Wedmore was a part of a Schell’s Bottle Cap championship team that took first overall.

On Monday, 14 years later, Wedmore was a part of a record-setting five-some that dominated the Schell’s tournament again, this time teaming with Jeff Anderson, Mike Boland, Jim Pettis and Carl Paa to shoot a 125, tying a tournament record in the event.

Perfect weather and teammates made Monday a day to remember for Wedmore.

“We just ham and egg it really well, our scramble team was 5-under and that’s pretty good,” Wedmore said. “I think we had one bogey, so we did really well. Then the A and B player did the same thing pretty much, so we just all played really well together and that’s what you have to do.”

Wedmore admitted that he dressed warm in the morning. As the temperatures increased, he decided to keep this jacket on so he wouldn’t jinx the rest of the team, which was playing well at that point.

“I started with my jacket on and it got warm, but I decided to keep it on and the rest of the guys were like ‘don’t take it off,'” Wedmore said.

Team 5A won by seven strokes. Team 14, which was made up of Matt Holm, Terry Steinbach, Brent Reinarts, Peter Eichten and David Vorwerk, shot a 132. Team 4, made up of Randy Paa, Glenn Untiedt, Mike Maloney, Lee Brandt and Jim Bastian, was third with a 134 and Team 13B (Rob Geistfeld, Craig Larson, Joe Eckstein, Benny Seifert, Bob Webber) finished fourth with a 135.

Team 3 rounded out the Top5 five with a 135. That team was made up of Kyle O’Donnell, Tom Fenske, Ken Paa, Randy Wiltscheck, and Mike Hillesheim.