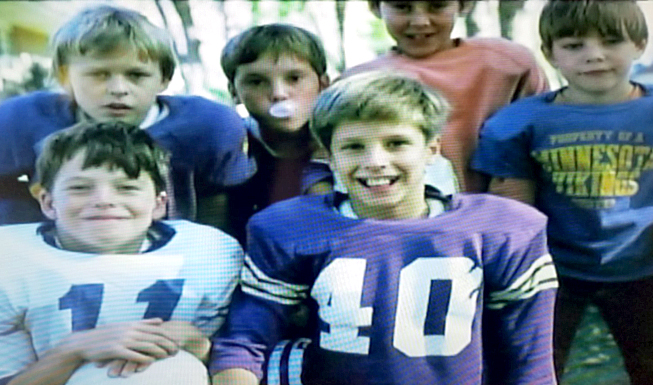 “Spanning the globe to bring you the constant variety of sport. The thrill of victory and the agony of defeat. The human drama of athletic competition. You are looking live at Summit Street Stadium in beautiful Sleepy Eye, Minnesota and this is ABC’s Wide World of Sports.” That’s my kid version of Jim McKay’s iconic introduction.

In the days of “boy germs and girl germs,” I knew what I was going to be when I grew up. At seven years young, my future looked bright. I was going to play for the Twins in the summer, the Vikings in the fall, and score goals for the North Stars in the winter. If the Lakers would have me, I’d fly in whenever they needed help at The Forum. After all, Jerry West was getting up there in age.

Yes siree! I had it all mapped out. I’d live in a nice house in Bloomington, close to Metropolitan Stadium, Met Center, and the airport so I could jet to those NBA cities. I couldn’t wait to see myself on a bubble gum card.

I knew that “On the Road to Bloomington” many things had to come together. Lord knows, I worked on being like my heroes. Every. Single. Day.

Rod Carew’s batting stance with a peach pit in my cheek for a “chaw” made for better visibility to see the pitch. Stoic Alan Page, standing in the snow, hands on hips, watching my breath as I meditated and prepared like a bull kicking up turf to engage it’s matador, to sack some pitiful neighborhood quarterback. My “Goldy Shuffle” boot hockey celebration after “He shoots! HE SCORRRRRES!” And last second shots in the driveway to win Summit Stadium Basketball Championships. My dad nicknamed me Sport.

Our home at 110 Summit Street SW was my training grounds to destiny. It was also corporate headquarters where I ate and slept. I lived with the real estate owner and my own personal chiropractor (Dad). I had a chef, nurse, and housekeeper (Mom). She made sure that I had “clean underwear on,” and developed proper nutritional habits like “cleaning my plate before I left the table” and eating organic foods. It was called fresh from our garden then. She patched up blue jeans and “skun” knees. She was always ready to piece me back together with Band Aids and a trusty bottle of Merthiolate Tincture. Damn, that stuff burned like when they poured bourbon on an open wound in a John Wayne western.

Our double lot in the middle of the block was a multi-purpose stadium for backyard football and one of the nation’s finest Wiffle ball parks. The driveway doubled as a boot hockey rink and basketball court. It was surrounded by buildings that walled in the stadium. Their shingles looked like perfect rows of stadium seating. The clothesline was a goalpost for breaking Tom Dempsey’s 63-yard record kick. We made penalty boxes with freshly shoveled snowbanks.

My friends and I took little time off. Only to eat dinner and supper, celebrate holiday gatherings, and an occasional day on the couch to be sick.

I didn’t look at lawn mowing “chores” to be a punishment. Rather I wanted to mow Summit Stadium so that George Toma would give his stamp of approval. I might have even lowered the blade a notch to indicate field markings or foul lines. Somehow this never bothered George Toma. Um, I mean Dad.

The turf was passed down from my older brothers, as the dead grass areas were from their games. Countless games of hot box wore out dirt spots which also doubled as home plate and second base.

Back then, dads showed up at home just in time for supper. Neighborhood moms were always around and vital to our daily activities. Moms were quick to the rescue with our version of sports drinks: an ice cube-chilled, glass pitcher of powdered Kool-Aid laced with sugar.

We whippersnappers had to play it cool if we wanted to play indoors. There were indoor sports like Nerf Hoops and Knee Football. Or you could clear out the living room furniture for “DING DING DING! All. Star. Wrestling!” If we got rambunctious in the house any of the neighborhood’s matriarchs would vociferate, “YOUKIDSGETOUTSIDEANDPLAY!” Yes, it sounded like one word. It was followed by, “NOW!”

Our home had one television set with four channels. We had a remote-control channel-changer, but it was not hand-held. Instead it used voice command. The youngest in the family laying on the floor closest to the TV changed the channel by parental voice command.

Remember this? Dad snoring to Lawrence Welk or Walter Cronkite as you belly crawl, elbow and knees, like a toy army soldier to silently change the channel. Only to have the Voice Command snort and wake up. “Hey! Turn that back on! I was watching that!” That meant it was time to go outside and play.

You see, it wasn’t punishment. “Outside” was where hours of play dominated our youth. Before metal bats, youth travelling teams, and video games, there was a world of hand-me-down gloves and nailed-together wood bats reinforced with black sticky tape. There were weathered footballs with striped ends, cracked wooden hockey sticks taped together, and red, white, and blue rubber Artis Gilmore basketballs. Smells like the aroma of dirt mixed with basketball rubber while washing our cold hands in a sink of warm water.

It was a time that a few ingredients made for a wonderful recipe of fun: kids, some equipment, and, the best part, imagination. Not a parent to be found. Rules were made to be broken along with panes of glass and porch screens. Instant replays were “do-overs.” Hydration breaks were from the garden hose, not purchased in plastic bottles.

The Vikings won multiple Super Bowls in my 1970s. I have friends in their fifties to prove it. There were Twins’ World Series trophies hoisted by Carew, Killebrew, and yours truly.

Well, I can’t be late for supper. I’ll get on my banana bike, pop a wheelie, and lay a patch of rubber on the driveway before the 6:00 whistle blows. I don’t want to be grounded. We have another game tomorrow, and I can’t let my future teammates in Bloomington down.

When you have a moment, Google Frank Sinatra singing “There Used To Be a Ballpark.” Close your eyes and listen, visualizing your own ballpark called home.

Thanks 110 Summit Street, old friend, for all the thrills of victory and the agonies of defeat. Yes, there used to be a ballpark, right there.

The New Ulm Public Utilities Gas Department will be starting our annual leak survey soon. This leak survey is ...

No doubt, readers of The Journal have noticed the paper getting skinnier since the COVID-19 pandemic forced ...

Filings for County Commissioner and Soil and Water Supervisors opened on Tuesday May 19th and will close on ...