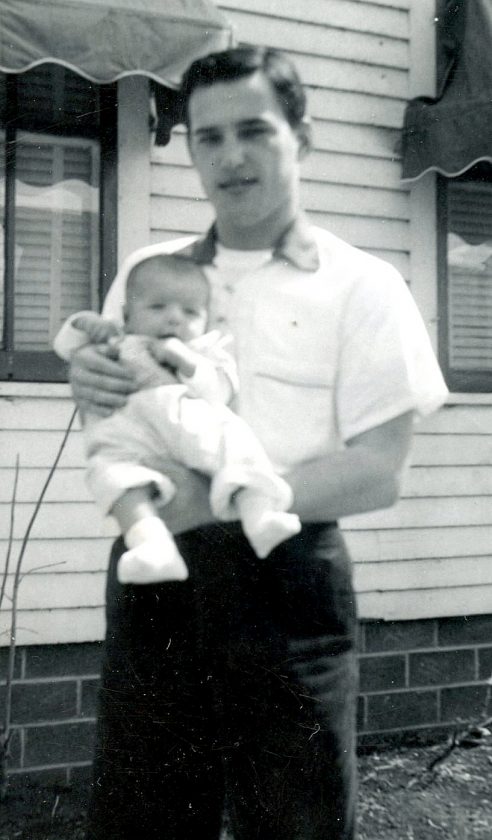 Big brother Dale passed away on June 21. Dale battled dementia his last years, although I’m not sure it’s correct to say one “battles” dementia. It creeps upon its victim who slowly succumbs. In the end, death is the known outcome.

Dale was older than me and gone from the house by the time I remember things. So we didn’t play together as kids. That was made up for by working together 40 years. Dale had his own farm, and shared machinery and labor first with our dad and then me. There were many hours fixing on stuff, moving equipment, and strategizing.

Dale liked to play to a certain gruff persona. We had conversations when things weren’t going well that were more grunts and huffs than words. When Dale was in a good mood, his friends knew he was a master of “giving each other crap.” That’s a guy thing; I don’t know that there is an equivalent in the other gender.

Under that exterior was a soft part. I saw that when we talked about our children or friends who were going through a rough patch. I never figured out why he carried the ornery personage on the outside. My mom said it was there back in his childhood. It was a defense mechanism I suppose. We all have our ways to circumvent this life.

I heard often “I can’t believe you two are brothers.” We had differences. Dale wouldn’t have been caught dead writing a newspaper column. That said, there were those things that siblings have in common by rights of sharing parents. Bits of father Sylvester and mother Alyce leaked out. Children inherit traits, albeit in different doses.

There was always baseball to talk about when we were tightening bolts or greasing. Whether it was the Twins or the Legion team Dale coached, there was plenty to fill conversation, the same being true for any two fans. He was a very good high school player, probably good enough to play college ball. But Dale and classrooms weren’t much of a fit. He hurt his hand in the Army Reserves, and that cut short his amateur career.

There is somewhere a picture of Dale in a St. Mary’s baseball uniform holding his baby brother, me. (I couldn’t find that photo but found the one you see here of the same vintage.) I was born in February 1956. That June, St. Mary’s hosted the Catholic High School State Tournament in Sleepy Eye. The Knights were a favorite under young coach Moe Moran. Fred Bruckbauer was the star pitcher; Dale played third.

St. Mary’s kids hosted visiting players. A couple Faribault Bethlehem Academy players stayed at our farm. Dale was friendly to them until they upset the Knights in the semifinals. Then he wouldn’t talk to them. My mom told me she wasn’t too happy with him, but that was Dale.

In our years of farming, we had one large argument. This was long ago, steeped in the pressure of a late fall, something to do with where the plow should go next. I remember my dad being dragged into that and thinking how hard it must be to watch your two sons argue. I think both Dale and I wanted to avoid a repeat of that. There were other times when I did something stupid, that Dale had a smirk that didn’t need words. A couple times I wanted to punch him and a couple times he probably wanted to punch me.

Forty years of working together is like a marriage in ways. You get to a point where you complete each other’s thoughts. In a farming context, that is expressed in knowing what and who should be where and when. Patterns are established that make conversation nonessential. We just knew what came next.

About five years ago, I remember coming in the house and telling Pam I didn’t know what Dale was doing. Those seamless thoughts that meant we knew what went where and when were not seamless. He was putting wagons in places that didn’t make sense as I was opening up a field with the combine. I had to get out and explain what I thought were obvious things.

Soon after, Dale’s wife Dorothy stopped me in the yard to say that the doctor had diagnosed Dale with dementia. Suddenly, things made sense. Or more accurately, things that didn’t make sense had an explanation.

Around then, Dale’s son Jay began helping, taking days off from his teaching job. Over a few years, as Dale struggled to do things that used to be second nature, Jay took more responsibilities.

Dale’s decline seemed gradual to me, but the markers were more obvious to his family. A year and a half ago, it became unsafe to have Dale at home, and he moved to Prairie Senior Cottages in New Ulm. It is a wonderful facility for folks afflicted with memory loss, with a home-like atmosphere.

I went there with Jay a month ago. When we came to Dale sitting in a recliner, there seemed a flash of recognition. I half expected, “Randy, what the hell are you doing here?” But he couldn’t name me. We talked about the crops and the Twins. The replies were mostly one word.

You’ve seen the projections about the coming epidemic of Alzheimer’s and other dementias as the population ages. I have several friends whose parents are so afflicted. There are only a few ways to be born, to enter this world. But there are many, many ways to leave this life. Dementia is one. It would not be my first choice. (Can I choose “none of the above?”)

For some reason, it doesn’t scare me as much as it used to. Perhaps it’s the gradual nature of it. There were several years of frustrating, poignant, and even comical moments with Dale. In the end, it felt like a long good-bye whose time for leave-taking had come.

I’ll end with a memory. My first year home from college, I was trying to learn a lot about machinery and harvesting crops quickly. It was stuff I’d helped with, but never was responsible for. I asked my dad and brother a million questions.

One October Sunday night Dale and I were combining corn. We were stopped and making some adjustment on the corn head. There was enough moonlight that we could do whatever we were doing by that. I decided that was a good time to give Dale some news. Pam was expecting, and my life was about to get more complicated for sure.

Dale gave me a look of some consternation. Then he said he also had news. Dorothy was pregnant with their fifth child. Seventeen years apart in age, we were facing similar unexpected situations: me at the front end of this parenting thing, Dale at the back end. At some point, we started laughing. Under the moon, next to the combine, in a corn field.

Thirty-eight growing seasons have rolled by since then. My daughter Anna and Dale’s son Kelly are talented adults, both doing good work. Anna has four-year-old Levi, and Kelly has five-year-old Kyler. None of that could be known in that field the night we were laughing.

I posted a couple of photos on media feeds Saturday of some young people holding signs on Broadway. The young ...

The New Ulm Public Utilities Gas Department will be starting our annual leak survey soon. This leak survey is ...

No doubt, readers of The Journal have noticed the paper getting skinnier since the COVID-19 pandemic forced ...

Filings for County Commissioner and Soil and Water Supervisors opened on Tuesday May 19th and will close on ...