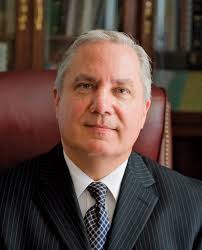 NEW ULM — Brown County’s first confirmed case of COVID-19 infection was announced Monday. Martin Luther College announced on its web page that its President Mark Zarling has been diagnosed with the disease.

Zarling has been hospitalized in Mankato, but it is expected he would be released Monday or Tuesday to recover at home.

He lives in New Ulm.

According to college spokesman William Pekrul, Zarling had traveled to the Seattle area earlier this year, and it is assumed that is where he was first exposed.

The college’s statement said Zarling’s symptoms appeared last week, and 24 staff members with whom he had been in close contact have been self-quarantined at home since March 24. Pekrul said the school nurse has been monitoring the symptom sheets of the 24, which includes himself, and so far no one has exhibited symptoms of the disease.

Martin Luther College closed its campus on March 12, while students were on spring break. The college extended the spring break to March 22, and has been conducting classes through distance since then. The college announced last week that the distance learning period will continue through the end of the spring semester.

The college’s Administrative Council is currently deliberating how to address end-of-the-year events, and other pertinent issues.