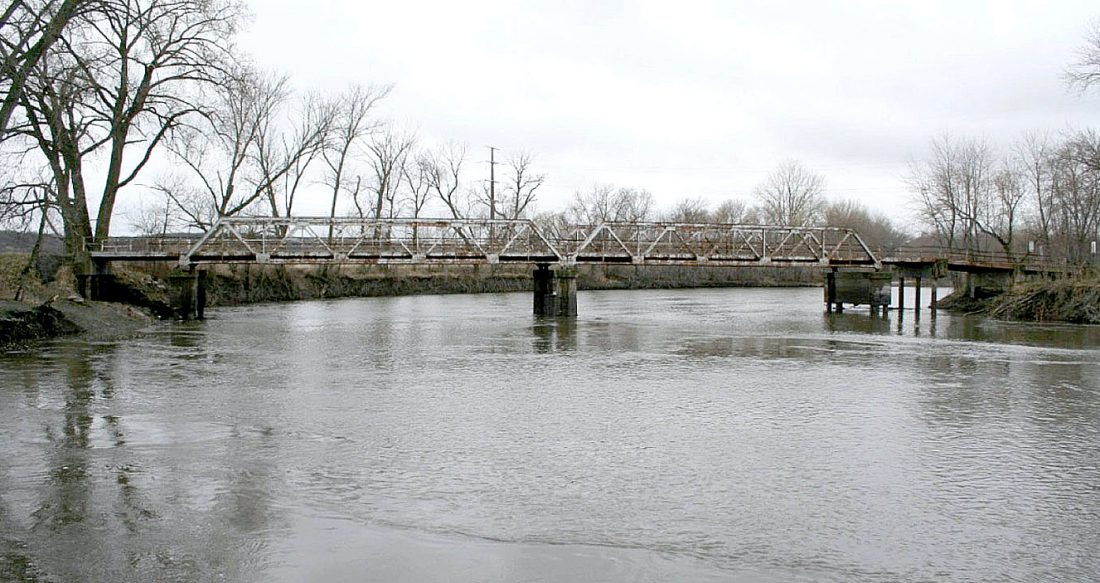 NEW ULM — Brown County commissioners heard from a couple of Franklin firefighters in a public hearing Tuesday after reviewing a rehabilitation study on a historic bridge.

“This bridge needs to be replaced. We recently had a fire call and needed to use it. It slowed down our response time,” said Franklin firefighter Joel Harmoning.

“Our fire and ambulance departments need a bridge. With the old bridge closed, it forced us to use a treacherous road that is full of frost boils. The road could throw us in the ditch real quick,” said Franklin firefighter Gene Wolling.

He said a new bridge could also be used to drive modern implements on “back roads” instead of using State Highway 4 which he said is challenging due to guard rails on the road.

Bridge 2110, known as the Hale Bridge, on CSAH 8 over the Minnesota River, is the last county truss bridge. It is structurally deficient with a low sufficiency rating and a number of serious structural issues. It was closed to traffic a couple of years ago.

The 17-feet-wide, 250 feet long, 6-span bridge is a historic structure, which makes it difficult to replace. It was closed Aug. 1, 2017 after a critical deficiency was discovered. It has been load posted at 5 tons for several years due to other structural problems.

“I hope we can replace the bridge with something functional,” Simonsen said.

Springfield City Manager Joe Stremcha said the City of Springfield is considering Riverside Park options and is open to cost-sharing with organizations to move the old bridge to the park and span the Cottonwood River.

Brown County Highway Engineer Wayne Stevens said the old bridge had 80 to 90 vehicles cross it daily. He said the bridge could be mothballed on dry land, sandblasted and painted for less than $1 million.

“It won’t be cheap, but it could make a big pedestrian bridge,” Stevens said.

New bridge project documentation would need to be done in 2020 for project to take place in 2022, Stevens said.

Bridge project design engineer Tom Wilson of Erickson Engineering said a new bridge could be built for about $2.4 million. He said the new bridge would have two piers in the water instead of four and would be wider and higher than the old bridge.

In February 2018, commissioners approved a resolution to accept $1.2 million in federal off-system funds to pay 80% of eligible costs to replace the bridge.

• A Prairie Lakes Youth Program discount agreement for guaranteed use of 1,000 days in 2020, motion by Commissioner Windschitl, seconded by Commmissioner Tony Berg.

• A Committee Against Domestic Abuse (CADA) Keep Me Safe 2020 contract for supervised visitation and exchange services at $30/hr. for 2020, motion by Commissioner Berg, seconded by Commissioner Dave Borchert.

Generally, county-based workers are used for supervised visits when parenting skills are being taught at the same time or if CADA staff is not available when a visit is needed.

A cooperative agreement provides compensation to the sheriff’s department for the delivery of legal documents to clients and to the county attorney’s office for legal services rendered.

• The 2020 MRCI Extended Employed and Adult Day Services Contract at $202.62 per month per client for extended employment, motion by Commissioner Simonsen, seconded by Commissioner Windschitl.

Brown County has been contract with MRCI for extended employment services for people with disabilities who are not eligible for a licensed employment program by waiver.

All program clients work at community sites but need the additional support of an MRCI work counselor to maintain and coordinate employment. The contract is 2% higher than the 2019 rate. Program cost was $92,347 in 2018 and $65,490 for the first 9 months of 2019.

System implementation was estimated to cost $405,772. That includes $344,882 for CAMA and tax installation, first year maintenance and travel costs. Estimated costs to be budgeted are $213,872 since $191,900 was received by Brown County as a refund from the Avenue Tax/Cama project used for more than 6 years.

“I understand there is a lot of risk involved and it concerns me to spend a half million dollars on this,” Commissioner Windschitl said.

“They are up and running and I have a good comfort level,” Grunert said.

The state highway department plans a surface rehabilitation project on TH 14 west of Springfield in 2022. It proposes intersection lighting at CSAH 1 and 2. MnDOT would pay for lighting installation but requests the county pay for maintenance and electricity.

In addition, MnDOT plans to apply for federal safety funds for intersection lighting and improved signage at the intersections of TH 14 and CSAH 10 and 11 south.

• Receiving and order filing a City of New Ulm request to withhold the Marktplatz Mall and George’s Ballroom from public sale for 6 months, from Nov. 26 to May 26, 2020 for potential government acquisition, motion by Commissioner Berg, seconded by Commissioner Simonsen.