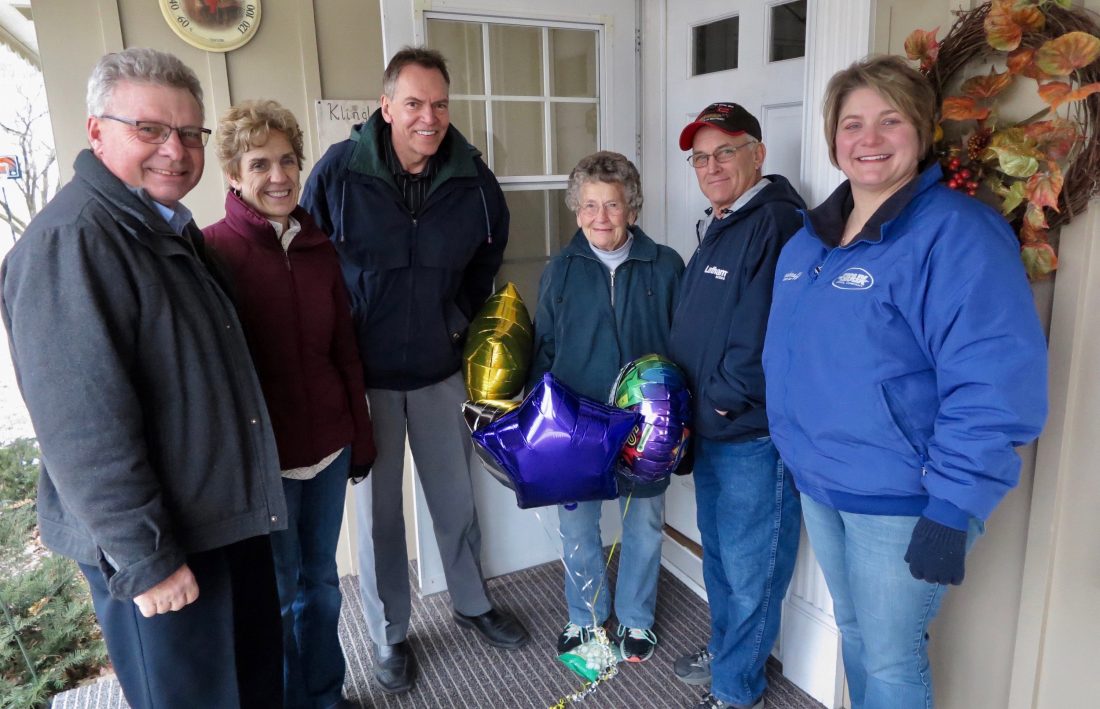 Submitted photo courtesy of Ruth Klossner Hub Club member Arline Klingler, center, was totally surprised when a half dozen club members stopped by her house Wednesday afternoon to tell her that she’s the newest recipient of the club’s Service to Agriculture Award. Past recipients of the award pictured are, from left: Denny Schmidt, Linda Neigebauer, Randy Schroeder, Del Fischer, Jr., and Michele Schroeder. Not pictured: Ruth Klossner.

NEW ULM — Arline Klingler was about to leave home to go to one of her cleaning jobs Wednesday afternoon when a half dozen fellow Hub Club members showed up at her door. When she opened the door, they told her that she’s the newest New Ulm Farm-City Hub Club’s Service to Agriculture recipient.

Klingler was overwhelmed and protested that there are others more worthy–but the club members wouldn’t hear it. Arline has been a behind-the-scenes “workhorse” for the club for many years and is very worthy recipient.

Klingler will be recognized at the club’s January 27 banquet at the New Ulm Community Center.

Klingler and her husband Stanley joined the Hub Club many, many years ago, at the urging of neighbors and friends Mary Jane and Linus Beranek. Although they never held leadership positions in the club, they were faithful volunteers, helping at numerous events–Farmfest, Heritagefest, Bavarian Blast, breakfast, and the Farm Show at both Vogel Arena (prior to 2004) and at the Civic Center.

Stanley died in 2015 but Arline–now 89 years young–continues her hard work in the food stands at the club’s Farm Show and Bavarian Blast. She prefers to be behind the scenes. Ahead of the Blast, Arline makes the dressing for the potato salad. She and Stanley used to do it together; now she does it alone.

“I said I don’t need help. If you’re talking, you get mixed up,” she said.

Klingler is willing to pitch in, anytime, anywhere.

“I remember one time, when Bavarian Blast was down in (German) Park, we ran out of potato salad on Saturday. So, at 2:00 a.m., we were cooking potatoes in the kitchen out at St. George. Then we carried them down the hill to the food stand,” Arline said.

Arline and Stanley were married in 1951 and farmed in Lafayette Township, Nicollet County–on the Fort Road, halfway between Klossner and St. George–until 1977. They rented the farm out after that, but continued to live there. They moved to New Ulm in 2009.

Klingler retired from 3M after 28 years. She was home about a week, then started cleaning houses. She now cleans five houses and three offices on a regular basis.

When asked if she’s thought about retiring (again), she said, “This is my retirement.”

In addition to her work with the Hub Club, Klingler takes care of the grotto at the St. George church–closing it down for the winter a few weeks ago. She’s made the spaetzle soup for the St. George brunch “for years and years” and cooks for funerals at the church.

“They call me and I arrange it around my cleaning,” she said.