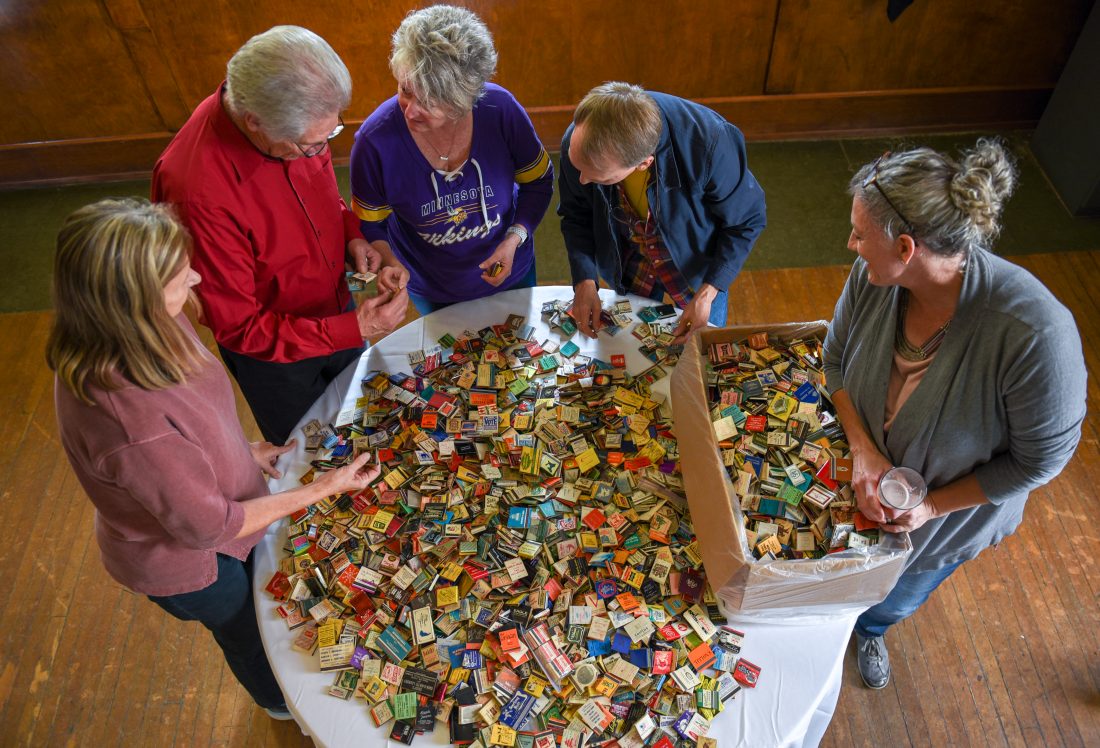 NEW ULM — If you pull out a dictionary and search for the term “phillumenist,” you might be surprised to find there’s a word for a person or group of people who collect matches.

The Twin Cities-based Great Lakes Match Club held a gathering at Turner Hall Sunday, and hundreds of vintage matchbooks were strewn across tables in the hall’s upper floor.

Some were encased in special glass-covered frames, and others amounted in piles. But all of the matchbooks held something in common — each had a unique design.

Quilling and four other phillumenists formed the Great Lakes Match Club in 1999 while living in the Twin Cities. The club travels around the state to visit auctions and match conventions. The club also holds monthly meetings, with this month’s hosted by New Ulm natives Kara and Steve Carlson.

Kara said she become involved in match-collecting when she met her husband Steve who’s a co-founder of Great Lakes Match Club and an acquaintance of Quilling. Together, Kara and Steve own a variety of matchbooks of all shapes, sizes and ages.

For instance, Kara said Steve owns a World War ll era matchbook that’s in the shape of Adolf Hitler, and the matchbook’s striking pad is located on the dictator’s rear-end.

“You scratch the match on his butt,” Kara said. “It was a World War ll match but it’s incredibly rare and valuable.”

Called “frontstrikers,” the pre-70s era matchbooks had their striking pads placed on the front of the book.

Kara said matches and matchbooks used to play a hidden but huge role in peoples’ lives and thinking. She said advertising companies took advantage of the large amount of cigarette smokers back in the day, and decided to use matchbooks as tiny billboards.

“So Wrigley’s (gum) is credited as being the first campaign,” Kara said. “Then it became this windfall of companies realizing that it was great advertising. Every time somebody goes for a smoke they’d be looking at the (company name).”

Quilling said during World War ll it was mandated that a pack of matches would be given out with each pack of cigarettes. Matchbook production increased substantially during the pre-war and inter-war years.

“Each matchbook has 20 matches in it, so they would always consider these 20 little salesmen,” Quilling said. “Every time you’d pick up the matchbook you’d read the advertising as you’d strike the match.”

Some companies even went so far as to set records for the amount of matchbooks produced with one single theme or content.

“Pabst Blue Ribbon beer was the first company that set an order for a million matchbooks and they set a record for doing that at the time,” Quilling said. “Until Vegas came along, and Vegas has all their matchbooks produced in tens of millions.”

Despite the popularity and heavy usage of matches decades ago, production has significantly decreased and new, unique matchbook designs are hard to find.

“In the world of match collecting in Minnesota, we actually for a long time had a match production company called ‘Diamond Match’ in Cloquet,” Kara said. “They went under, and there’s not so many match companies making new matches anymore.”

Collectors often try to find matchbooks from famous businesses or places that celebrities have visited in the past. Considered as a piece of history for some phillumenists, the matchbooks exist as a reminder of the past.

“Certain match collectors seek them out because of the interesting story behind them on top of things like the graphics and all the other stuff,” Kara said.