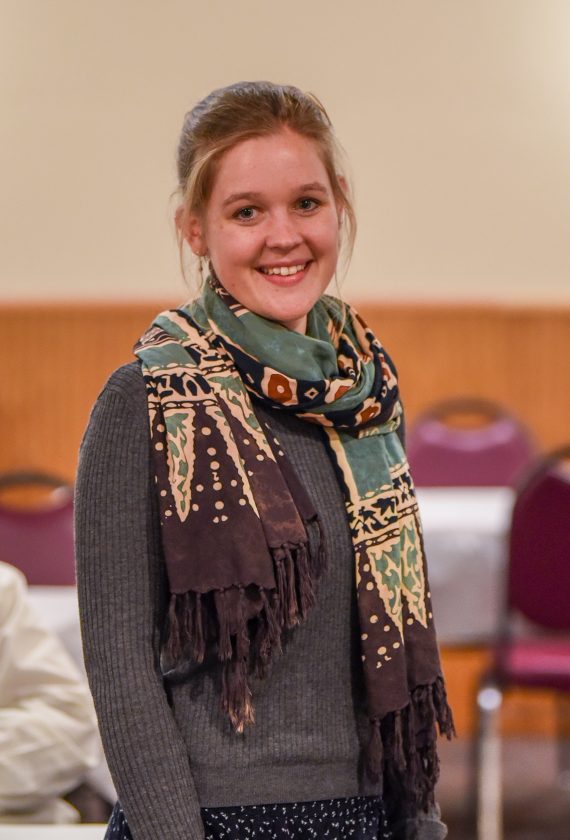 Recently, while staying with her host mom Jayne Maday-Hulke, Hanrieder saw her neighbor unloading an ATV and she was curious as to what it was used for.

“I’m so excited,” Hanrieder said. “I saw one of Jayne’s neighbors unload the four-wheeler and I was like ‘what is that?'”

Hanrieder, 21, is visiting the United States under the Sister Cities Commission’s Hans Joohs Cultural Exchange Program which has the sister cities of Ulm, Germany, and New Ulm exchange young interns who then travel to work in the United States or Germany for three months.

Since arriving in the United States on Oct. 4, Hanrieder has been interning at Oak Hills Living Center where she’ll soon delve deeper into the workings of her future career.

“For now I’m just observing all the different departments,” Hanrieder said. “It’s just such a huge facility, and eventually I’ll do a bit more nursing because I’m studying medicine back home in Germany.”

Seeing a four-wheeler isn’t the only “first” for Hanrieder.

Last weekend she attended Oktoberfest at Schell’s Brewery where she helped out as a volunteer. It was only her eighth day in the United States, and her first time attending an Oktoberfest-style celebration.

She said her hometown of Ulm doesn’t have an Oktoberfest of its own, and the closest festivities are in Munich — the origin city of the fall festival.

“I’ve never actually been there,” Hanrieder said with a laugh. “So I’m kind of ashamed to say that because I only live one and a half hours away from Munich.”

With lower than average temperatures last Saturday during the festivities, Hanrieder said she was a bit chilly. But she didn’t let the glimpse of a Minnesotan winter get her down.

“I really enjoyed myself out at Schell’s,” Hanrieder said. “I was kind of cold because it was freezing outside, but the people were so nice, and it was so nice seeing Americans dressed up in lederhosen and dirndl. I’ve never seen that before.”

Since arriving from Germany, Hanrieder has got the chance to visit most of southern Minnesota via a “small road trip” with her host mom. She said she’s visited the Twin Cities and hopes to return there soon.

“It was such a nice view, but really windy,” she said.

One stark contrast Hanrieder said she’s observed while in the United States occurred after a recent visit to Perkins in New Ulm. She said large restaurant chains can be a bit rare in her home country.

“For Germans, it’s so completely different,” she said. “In Germany we have all these small cafes and here it’s such a big diner, so I was amazed.”

Hanrieder plans to take a weekend trip to Seattle in November to meet up with a friend who’s staying near Vancouver Island.

After staying with Maday-Hulke, she’ll be hosted by Greg and Lori Howard and James and Konnie Bartels.

“I always say to Jayne ‘just take me everywhere with you’ because I’m just happy to be here and experience all new things,” Hanrieder said.