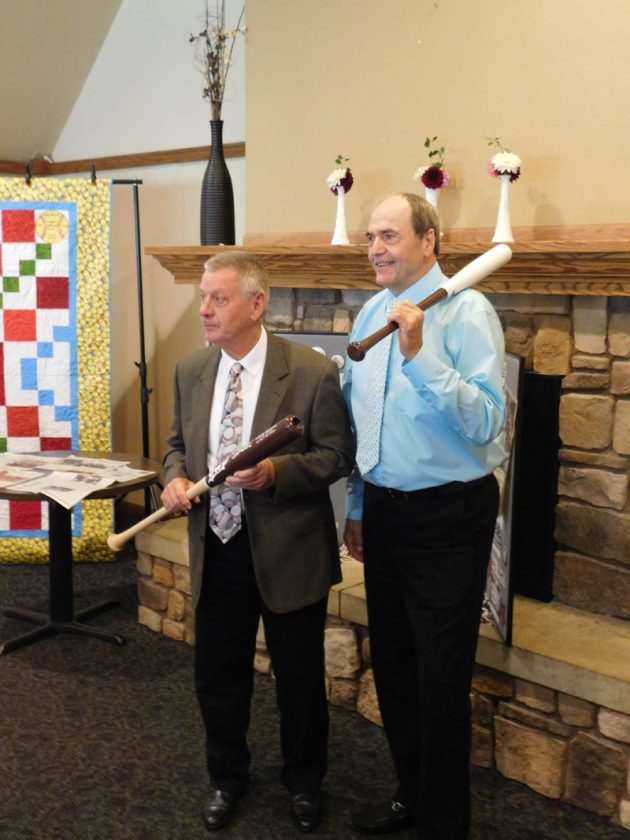 Staff photo by Clay Schuldt Bob Weier (left) and Bob Mertz hold the bats they were gifted in honor of their induction into the NUACS Hall of Fame for Distinguished Athletics.

Coaches Bob Mertz and Bob Weier were both inducted during a special luncheon at the New Ulm Country Club Saturday. Both were nominated to the Hall of Fame for Distinguished Athletics.

Mertz, a 1967 graduate of CHS, started as an assistant softball coach in 1978 before taking over as head softball coach in 1980. In 39 seasons, Mertz led the Greyhounds to 26 conference titles, 16 section championships, and seven Class A state tournament wins. He holds an impressive 802-141 record as head coach at Cathedral High School and is recognized as the state’s all-time leader in prep softball coaching victories.

“In 39 years of coaching, I wouldn’t change anything,” he said.

Mertz said when first asked to coach he turned it down because he never played sports in high school. He initially accepted the assistant coach position, but after three years had the confidence to continue.

“I wanted togo out enjoying softball,” he said, and he knew the program was in good hands with new head coach Jamie Portner.

Weier thanked his wife and family his success. He credited his success, in part, to his baseball family.

He also thanked his fellow coaches. He said Cathedral has a quality program because of all the coaches.

The support of parents was another factor in his success.

“You don’t do this without supportive parents,” Weier said.

“If I did the first two right, the third came along on its own,” he said.

Winning the state championship in 2005 was Weier’s top moment as a coach, but he would never forget the people he met in his career.

“I will always treasure this day,” Weier said.

NUACS Activities Director Alan Woitas closed the award ceremony and said NUACS is proud of both.