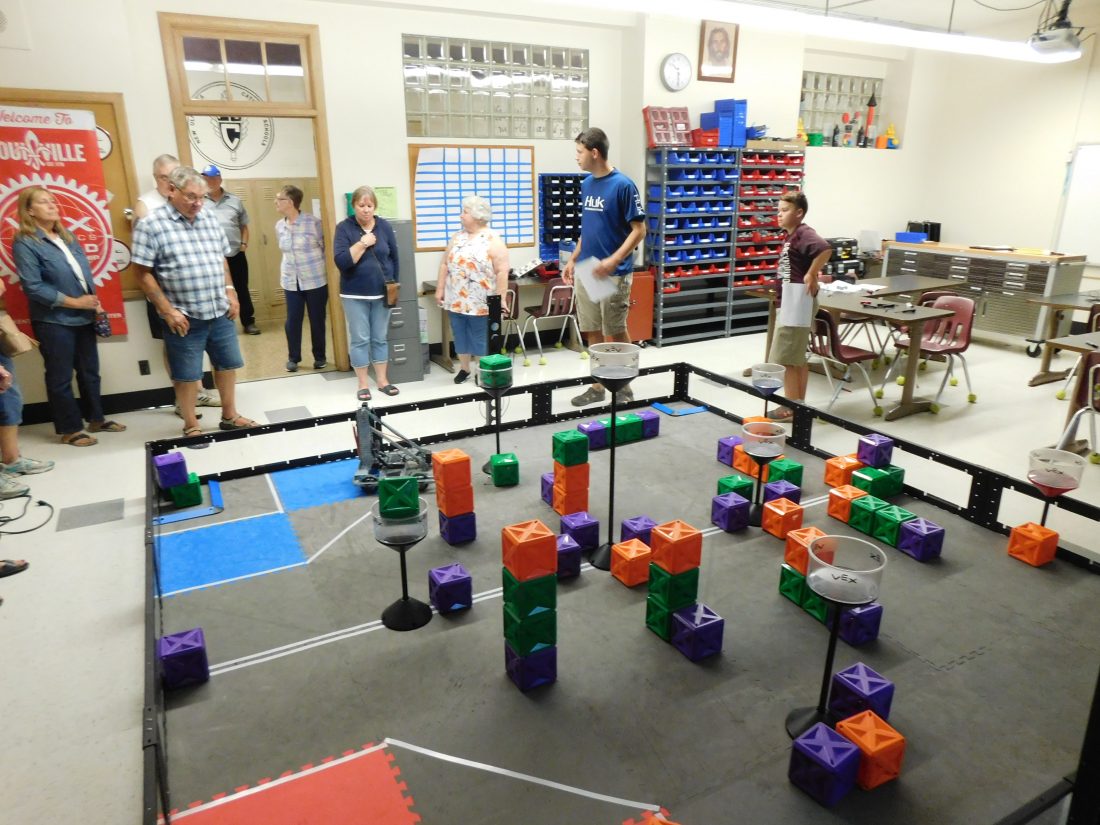 The tour of NUACS takes former alumni to a room now used for robotics. It is one of the newest offerings at Cathedral High School.

NEW ULM — It was a full weekend of celebrating for Cathedral High School (CHS), which marked its centennial this year.

Saturday, the New Ulm Area Catholic Schools (NUACS) were open to the public for tours. NUACS alumni attended to see what had changed in the building and what remained the same.

CHS students Kyle Goblirsch and Joey Fingland led the first tour of the day, with other tours to follow.

The tour began with the CHS gym. Several displays featured memorabilia and photos from the school’s history.

They covered most of the school building from the shop and band rooms to the new computer labs and robotics room.

Several alumni on the tour commented on the changes to the classrooms. The alumni women were amazed to learn a third of this year’s shop class was made up of girls. There was a time when the shop was off limits to girl students.

The computer labs and robotics rooms were a significant technology upgrade for alumni. Goblirsch said students are still tested on how many words a minute they type. The difference is today’s student use the computer, while many alumni learned on the typewriter. One of the school’s old typewriters was in the memorabilia display.

One thing that remains unchanged is the limited air conditioning. Only the principal’s office and computer lab have it.

Goblirsch and Fingland said on warm days some classes are held in the tunnels connecting CHS and St. Anthony.

The tour traveled through the tunnel to reach the cafeteria. Since 1998, the graduating classes of CHS have decorated a wall panel with class handprints. The class of 2019 is the most recent addition. Their handprints surround an image of a root beer keg with 2019 on, instead of 1919.

The Catholic High School of New Ulm opened in 1919 with 20 freshmen. The first class graduated in 1923 with 16 students. In 1937, the school changed its name to Holy Trinity High School.

In 2011, grades 5 and grades 6 joined St. Anthony Elementary, with grades 7 and grades 8 moving to CHS. The middle school building was renovated to become the home of the Handmaids of the Heart of Jesus. The cafeteria, auditorium and science lab are still used by the school.

Alumni Relations Director Sara Rieland said the school expected alumni to return for the centennial. At least six CHS class reunions were scheduled during the event.

The fun continued through the afternoon with free kids activities in the middle school parking lot.

Johnny Holm Ban played a concert in the evening.