A wild cast of characters hobnob at museum gala 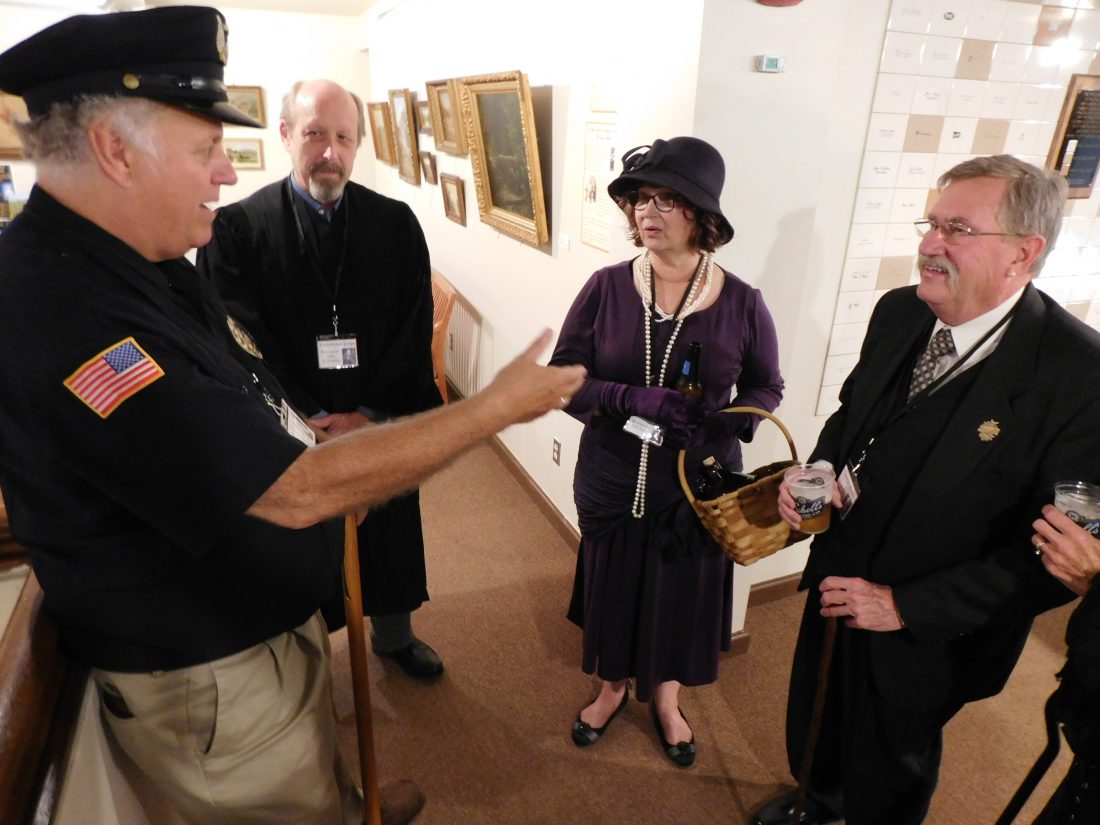 In honor of the 100th anniversary of Prohibition, the Night at the Museum theme was “In the Still of the Night.” In this context, “still” referred to illegal alcohol.

In 1919, the United States Congress passed the 18th Amendment effectively prohibiting the sale of alcohol. Brown County and much of the country was already living under “dry laws” following the end of the World War I.

The law was not enforced equally across the country, leading to widespread disregard and criminal behavior. The 21st Amendment overturned prohibition 14 years later.

Despite the law banning the production and sale of alcohol, many Brown County residents were able to get it.

“It was only enforced here when they wanted to,” Terry Sveine said. “Or sometimes not at all.”

Sveine portrayed police officer Joseph Tauer during the event. Tauer was a relative of Sveine’s. He served as an officer in Brown County from 1901 to 1932.

Sveine was not the only re-enactor playing a relative. The President of Schell’s Brewery Ted Marti and his wife Jodi Marti were playing ancestors George Marti and Emma Marti.

Schell’s Brewery was able to stay in operation during Prohibition because they switched to producing near-beer.

Dan Juni played infamous mob boss Al Capone. Though Capone operated out of Chicago, there are rumors he visited Brown County during Prohibition and evidence he had people working for him in the county.

In all, there were 11 re-enactors in the museum. Visitors were encouraged to visit with all 11 to sign a program card for an end-of-the-night raffle.

Finding all 11 was not the easiest task. While many could be found wandering the museum, others were lying low in the Museum Annex, which was set up as a speakeasy. To enter, you needed to know the right password.

This was the fourth Night of the Museum hosted by the Brown County Historical Society (BCHS). Executive Director Kathleen Backer said this year was exciting because guests were getting into the spirit of the event, choosing to dress in 1920s-era clothing.

BCHS has conducted a lot of research for Prohibition programming this year. An exhibit on the museum’s second floor is titled “Wet Stills and Dry Agents.” It is dedicated to Prohibition in Brown County.

The exhibit includes display boards on the history of Prohibition in Brown County and artifacts from the era, such as a moonshine still and a deactivated Tommy gun.

The Prohibition programming will continue noon, Thursday, Oct. 3, with a Lunch & a Bite of History with speaker Ted Marti. He will provide a presentation on the impact of Prohibition on Schell’s Brewery and actions taken by the brewery during the challenging times.