The amount, 4.63 percent more than the total 2019 certified levy, is based on a draft 2020 county budget of $39,151,145. The action came on a motion by Commissioner Scott Windschitl, seconded by Commissioner Tony Berg.

The average levy increase over the past five years is 3.25 percent annually, based on final levy increases. For the current draft county budget, $225,000 is the contingency line item, subject to final certification of the county board in December.

The final budget and levy is suggested to be adopted by the board on Dec. 17. That amount may be equal to or lower but not higher than the 2020 proposed property tax levy approved Tuesday.

Commissioners approved scheduling a public meeting on the proposed 2020 county budget and levy for 6 p.m., Tuesday, Dec. 3 in the Brown County District Courtroom. The regular county board meeting starts at 4:30 p.m. Dec. 3.

• Authorizing the purchase of a $33,333.99 low bid drone from Frontier Precision, Maple Grove, to be paid for and used jointly by the Brown County Sheriff’s Office and the Brown County Highway Department. Approval came on a motion by Commissioner Windschitl, seconded by Commissioner Berg. Maverick Drone Systems of Savage submitted a $40,055.99 bid.

The highway department will use reserves for its portion of the purchase and reimburse the reserves for the $20,000 that is tentatively budgeted for 2020.

Buying the drone now will allow the highway department to measure stock piles this fall, video some drainage ditches this year and be available for sheriff’s office emergencies.

“It’s expensive, but we have a lot of work to do with it,” Commissioner Windschitl said. “It would save lots of man hours and increase safety. I think it’ll pay for itself.”

Billings will be mailed by month end so landowners can conveniently pay at the same time taxes are due in November.

A large repair is being considered for CD1 that will also require an assessment. A landowner meeting is being scheduled to give landowners options When a plan is established, an assessment will be billed. The cost of the repair is to be determined, but is predicted to be more than $80,000.

Several systems have some large repairs pending. Assessments were just billed in 2019 due to re-determination of benefits, so Brown County Auditor-Treasurer Jean Prochniak proposes waiting a year before billing for another assessment.

• A resolution to transfer property transfers and certifications from the Auditor-Treasurer’s (A-T) office to the Recorder, motion by Commissioner Berg, seconded by Commissioner Windschitl.

In an effort to create more efficiency in the county, the AT and Recorder have teamed up to streamline the property transfer process. In addition, the A-T will be able to dedicate more time to create increased efficiencies at the license center and prepare for the 2020 election process. 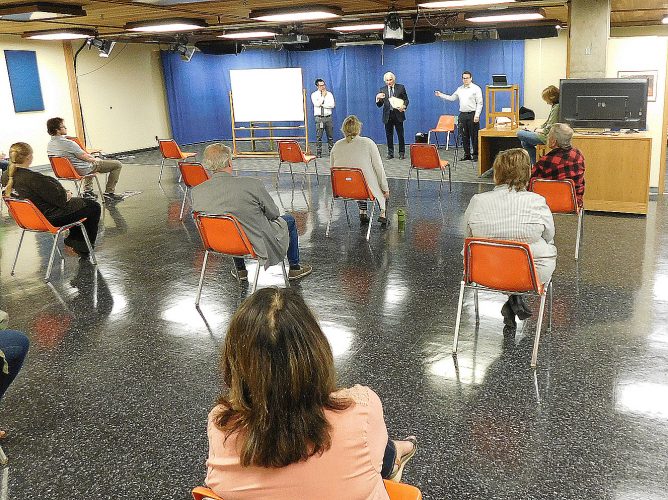