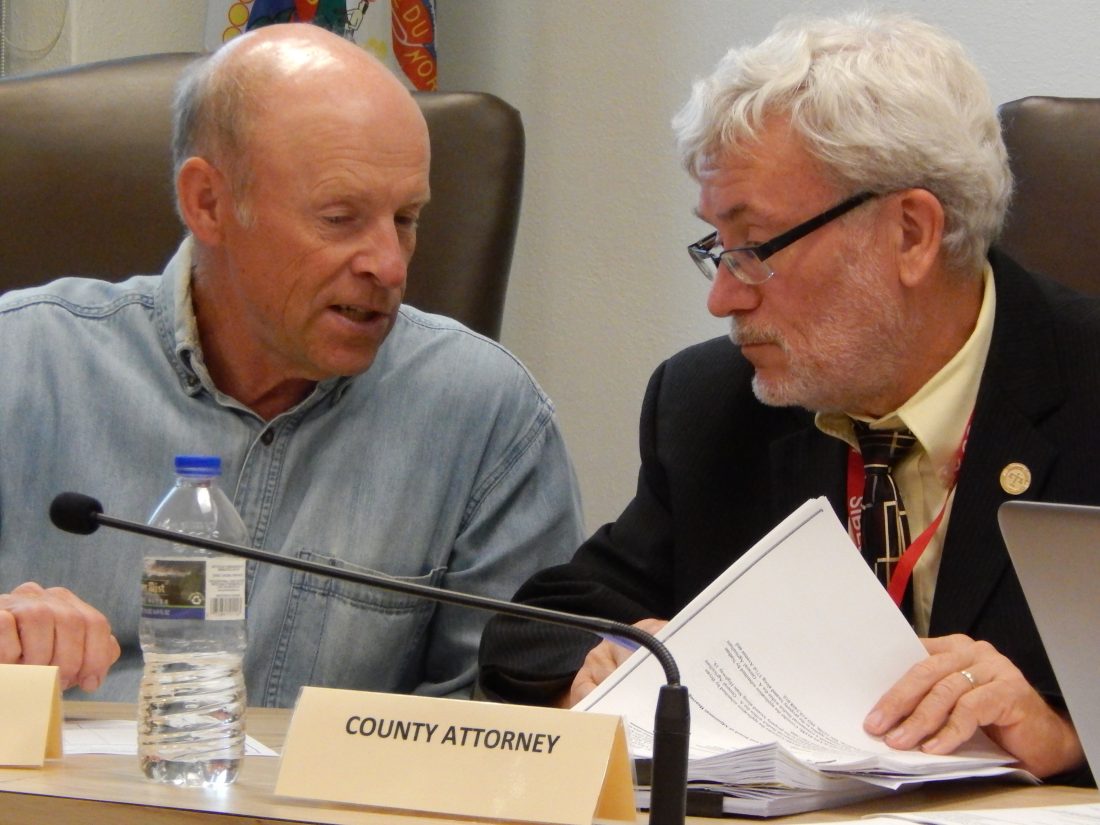 The first permit, submitted by Bryan Sommer to establish a 5,980 head (600 Animal Unit) nursery hog barn on property along State Highway 19, near Winthrop, was approved on a motion by Commissioner Bruce Lillienthal, seconded by Commissioner Joy Cohrs. Commissioners Bruce Froehlich, Darrel Mosel and Brad Perschau voted against the permit.

The second permit, submitted by Nathan Sommer to establish a facility along 571st Avenue and 276th Street, Winthrop, was approved on a motion by Commissioner Perschau, seconded by Commissioner Froehlich.

Prior to the public hearing, Sibley County Zoning Administrator Ryan Krzos told a standing-room only crowd the Minnesota Environmental Quality Board determined an environmental assessment worksheet (EAW) for the proposed hog nursery feedlot requests were not required.

In an Aug. 1 email to the Sibley County Planning & Zoning office, Arhart wrote that health concerns for the elderly, very young, ill or immune-compromised individuals could be serious.

“Breathing any concentrations of hydrogen sulfide or the other 160 plus gases produced in the anaerobic conditions within the manure pits could compromise the health of neighbors. Rosemary Arhart’s residence is in the direct path of prevalent northwest winds. This is a serious threat.”

“Sooner of later, the wrong feedlot will be built in someone’s backyard. But why wait for that?” Arhart said. “Research has shown home values around feedlots can drop 40 percent. These feedlots benefit a few people, but at what cost to others? Deny this.”

“Engineers saw everything we did. Nobody can cheat on this,” Sommer said. “Manure pits are sealed like a jar like your grandma used to do. There is no leaching going on. This pit will not leak water out.”

Country Drive In owner Steph Thorsen of Winthrop said she didn’t begrudge anyone to start a new business but that her biggest fear was air pollution.

Martin Jaus said he and his wife got respiratory issues due to a farm a half mile west, southwest of his place.

“We both love nature, but depending on our health, we may have to leave. I don’t want anyone to go through the hell we’ve gone through,” Jaus said.

Renae Sommer of Gibbon said her brothers wouldn’t endanger anyone with smell.

“Farms are going under. Bryan and Nathan are building this to deal with farm issues,” Sommer said.

Lafayette Township Farmer Paul Platz said he asked for a conditional use permit 23 years ago and heard the same concerns then that he’s hearing now.

“We got the permits and moved forward,” Platz said. “Ten years later, I talked to a farmer who opposed it. A week later, my wife and I bought his farm. He admitted he was wrong about it.”

Berger said a recent Indiana study showed such facilities can have a positive effect on land values.

“These are relatively small operations that are good projects,” Berger said. “They meet setback requirements.”

Commissioner Darrel Mosel asked if the barns could be located further from Highway 19 for biosecurity.

“I don’t see them so close to roads in Martin County, where I grew up,” Mosel said.

“It’s where I own land,” Bryan Sommer said.

Sommer said placing the barns further away from the highway and other people would require using a minimum maintenance road.

“My land turns onto a higher hill. There’s no power there,” Sommer said.

A Bismarck Township supervisor said putting the projects near the minimum maintenance road would require converting a two-rod road into a four-rod road, moving a ditch and spending about $150,000 to build up the road.