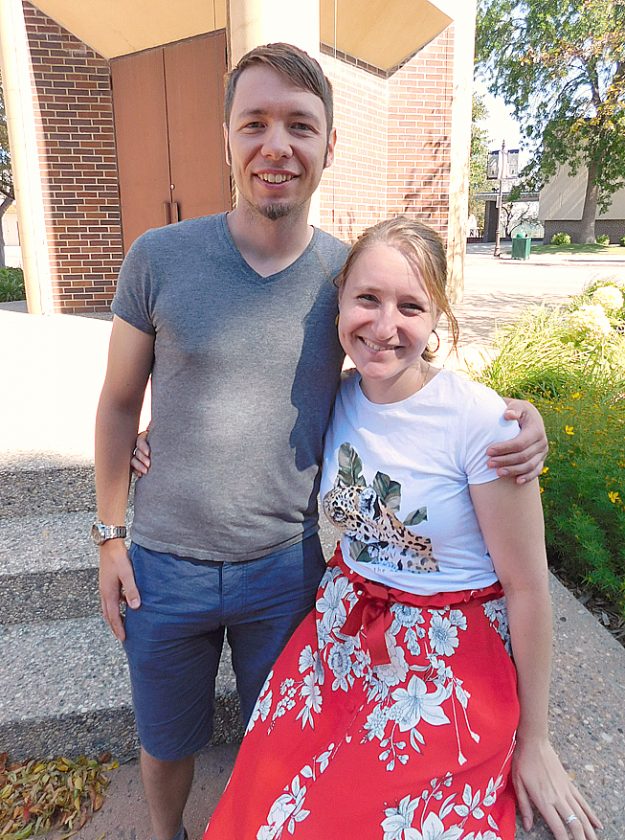 Staff photo by Clay Schuldt Clemens Knop, left, and Diana Uhlmann pose near the Glockenspiel during their visit to New Ulm on Tuesday. The couple is from Dresden in Germany.

NEW ULM — For the next few days, New Ulm will have visitors from Dresden, Germany.

Diana Uhlmann and Clemens Knop arrived in New Ulm on Saturday. This is Knop’s first visit to New Ulm, but Uhlmann is returning for the third time. She first came to New Ulm through the Hans Joohs Intern program in 2010. Uhlmann interned with the New Ulm Area Chamber and worked with a few area non-profits like the Hermann Monument Society.

Uhlmann said she continues to work in public relations marketing. Her return visit could be viewed as maintaining relationships in New Ulm. She said part of the reason for the couple’s visit is to see old acquaintances in New Ulm.

Uhlmann said she keeps returning to America and New Ulm because her excitement was triggered the first time.

Uhlmann and Knop arrived in the United States on Aug. 22 in Las Vegas. Knop said they landed in Las Vegas but did not gamble. Since arriving they have toured the western states and has been hitting as many national parks as possible, including Yellow Stone. New Ulm was the last stop on their trip.

Since Saturday Uhlmann has been catching up with friends and Knop is meeting new friends for the first time.

“Everyone is very welcoming,” Knop said. He enjoyed seeing the German language on many signs in New Ulm, especially the appreciated the “Willkommen” sign coming into the city.

Uhlmann said she loves hearing stories from the locals about how their ancestors immigrated from Germany to New Ulm.

Uhlmann and Knop said, today the subject of immigration is a hot button issue in Germany as well as the United States.

Uhlmann and Knop were learning a lot about the United States on their trip, but they were also sharing stories of their home.

Dresden was bombed several times during the World War II. The bombings in February 1945 remain controversial. Large sections of the city were destroyed but have seen significant reconstruction. The Dresden Frauenkirchen (Church of Our Lady) was restored in 2005. The city is also famous for its choir.

In New Ulm, it is common to see German influence in the community, but Germany has been influenced by America as well.

Knop said American Football is growing in popularity over the last few years. NFL games are regularly broadcast on German television. Knop is part of a flag-football team called the Dresden Monarchs. Their mascot is a lion wearing a crown.

The couple will remain in the United States until Thursday, before flying out of Minneapolis airport later that evening.

Until then, Uhlmann and Knop are trying to visit with as many friends as possible and see all the sites New Ulm has to offer.

Tuesday, they gathered with a dozen tourists beneath the Glockenspiel for the noon performance.