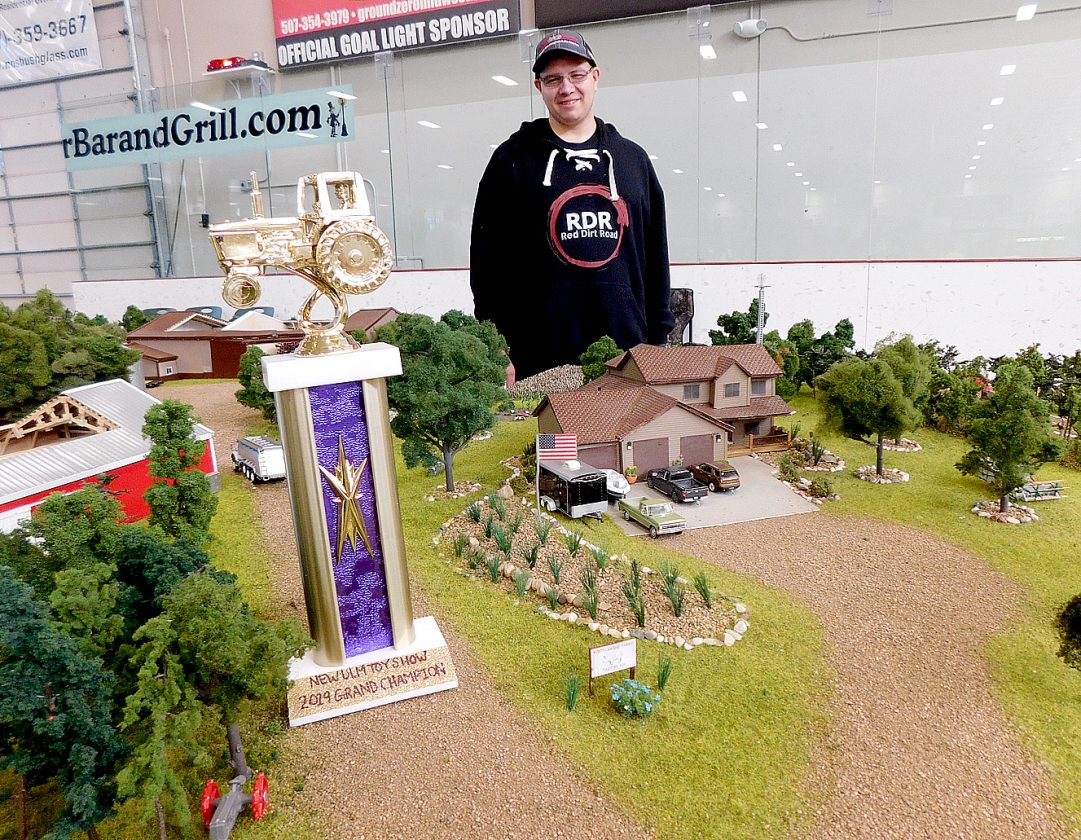 Staff photo by Clay Schuldt One of the last addition to Greg Borth’s miniature model was a condemned wooden bridge next to the replacement bridge.

The Willkommen Committee of the New Ulm Area Chamber of Commerce stopped at the Green Mill to welcome new General Manager, Tina Scharnberg and new Dining Room Manager, Brian Cook. Tina comes to the Green Mill from the metro area, where she’s spent the last 12 years in food service . She grew up in northwestern Iowa and later attended University of Wisconsin-River Falls, graduating with a health nutrition degree. Tina has 6 children and is currently looking to move to New Ulm. She shared with us that she has German heritage and she’s happy to be in New Ulm and looking forward to hosting Oktoberfest at the Green Mill this year. Brian Cook comes to New Ulm from Mankato, where he was most recently working as the General Manager at the Number 4 restaurant. Brian has management experience in not only restaurants, but also convenience stores and movie theaters. Brian attended the University of Wisconsin-Parkside before moving to Michigan to manage a movie theater. He has a 10 year old daughter who keeps him busy. In the photo: Lynn Fink, Citizens Bank Minnesota; Jan DeLeo, Sid’s Sign’s on Broadway; Tina Scharnberg and Brian Cook, Green Mill; Tami Leuthold, Professional Credit Analysts of MN.

New changes are coming to the old Wanda Gag House. Lana Hoffmann took over as House Manager earlier this summer and is looking to revitalize the historic landmark. Lana is a New Ulm native who, as a child, loved Wanda Gag and her famed children’s book, “Millions of Cats”. After some time away, Lana moved back to New Ulm and works at New Ulm High School as a paraprofessional. She is also a college student working towards her degree in Social Work. Lana is involved with the New Ulm Optimist Club, particularly its Youth Power programs. Lana is passionate not only about her own children, but also of those in the whole community and she hopes to translate that passion into her new position at the Wanda Gag House. She hopes to make the Wanda Gag House an exciting and interactive place for children of all ages and their families. Lana hopes to bring book readings, art classes, and tours specifically tailored towards youth. She also hopes to keep these activities free or low cost if possible so that all families can participate without a financial burden. Hoffman’s duties include scheduling staff, coordinating volunteers, providing training, planning events, marketing, digitizing files, and giving the occasional tour. As the new house manager, she also hopes to grow the Wanda Gag House Membership community. Hoffman remarked that “the house is a part of New Ulm’s history” and she hopes to keep its influence alive while fulfilling her new role. Hoffmanwas welcomed by the New Ulm Chamber’s Willkommen Committee earlier this month. For more information on the Wanda Gage House, visit http://www.wandagaghouse.org/ In the photo are: Anna Howell, Design Home Center; Lana Hoffmann, Wanda Gag House; and Nicole Briggs, Jensen Motors.

Fu Chen and his wife have operated Main Jiang House out of the same building for 20 years. This July, they moved their family-owned restaurant to a newer, larger space at 1702 Westridge Road #32, the location of the former Grand Moon Buffet. During this transition, they managed to keep both locations open. They didn’t make many changes to the space, except replacing some carpeting near the buffet area with hard flooring. They can seat about 170 people in this location and they have some new buffet items, now that they have a larger buffet-serving area. They have been open in the new location since July 9th and have been keeping busy. They enjoy the larger space for customers and the larger kitchen. The Willkommen Committee of the New Ulm Area Chamber of Commerce stopped to welcome them to their new location. In the photo: Nicole Briggs, Jensen Motors; Amy Pearson, Thrivent Financial; Sandy (daughter) & Fu Chen, Main Jiang House; and Kathy VanRoekel, Nuvera.

Each year, guests are allowed to vote on the top miniature display, but this year the contest included a judged award as well. Borth’s farm model was awarded the top honor.

His farm model resembles a typical country farm, like many of those seen in the area. The design used a combination of wood and styrofoam. Nearly everything in the model was built from scratch.

Borth’s winning display is one he has been adding to little by little over the years. Recently he has added extra trees, cleaned up the area around the shed and added an old bridge.

The old bridge is the most specific detail on the display. It was built to resemble a condemned wooden bridge. The high road has been moved away in favor of a box-culvert style bridge. 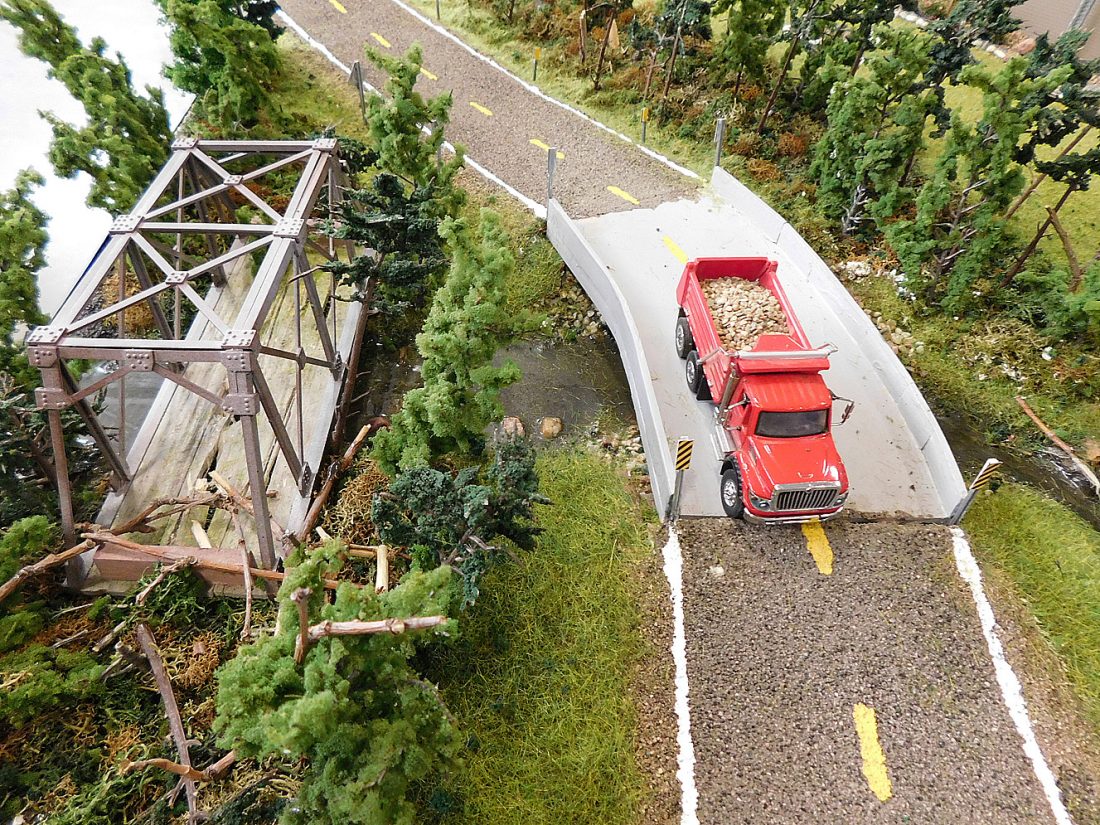 Staff photo by Clay Schuldt One of the last addition to Greg Borth’s miniature model was a condemned wooden bridge next to the replacement bridge.

Borth said he began creating farm buildings from scratch six years ago. He said miniature models are talent and hobby.

“Patience is the real struggle,” he said. “You cannot rush it. If you rush a model it will be sloppy, but if you take the time it will look nice.”

The miniature contest was part a small part of the New Ulm Toy Show. Organizer Wendy Mealman said overall the show went well, with most of the vendors saying they will return for next year.

Next year’s Toy Show will be the 35th anniversary of this show. Mealman is hoping to plan something special for this upcoming milestone.