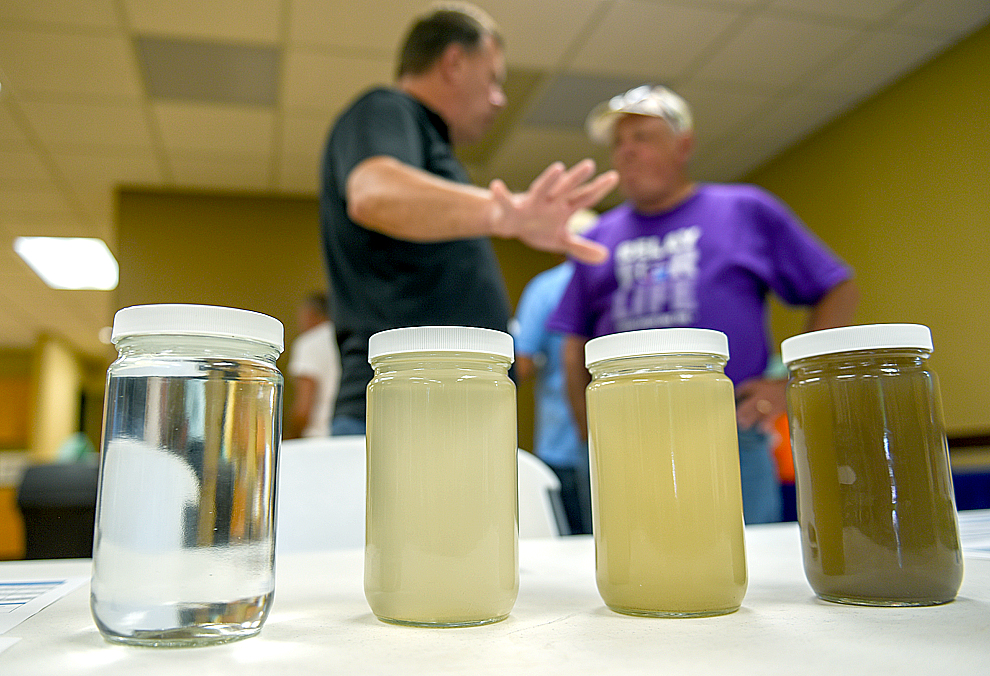 Staff photo by Gage Cureton Paul Davis, left, an Environmental Specialist with the Minnesota Pollution Control Agency, speaks with Rich Enger, right, about preferable sediment levels in Minnesota rivers using four jars of water that signify which amount of sediment is considered normal. From left, drinkable tap water, the goal for area rivers next, the average water clarity over a year and the dirtiest water at a given time.

The open house is part of a 60-day public comment period before the reports are submitted to the federal Environmental Protection Agency for review and consideration Sept. 20.

The report cites quality issues regarding the excess nitrogen, nutrients, pollutants and large amounts of sediment found in the Minnesota River and surrounding tributaries – calling for a 50% reduction in sediment going in these rivers.

“A lot of our studies will point to agriculture as a main source,” said Wayne Cords, MCPA regional manager in Mankato. “But I want to be clear – agriculture itself is not bad.”

Cords told open house attendees that individual farmers aren’t to blame for high levels of suspended solids flowing in rivers. Rather, he said the issues point to the dominant agricultural use of land within the river basin and the high concentration of farms located near each other.

“Eighty percent of this land is agriculture, so it presents unique challenges for us,” he said.

Cords said the water quality issues within the basin are also due to a complex mixture of other influences such as high turbidity in rivers which clouds water with soil and other particles. He said high turbidity symptoms can be pointed at increased precipitation and water run-off that fails to store in the soil.

He said most of the sediment is also delivered into the river during three to seven snow melt or rain events that occur in the early spring through mid-June.

“The frequency of intensive events has changed too,” Cords said. “But that itself isn’t demonstrating why we have these greater flows. For every inch of rain, we are seeing more run-off into the streams.”

Cords cited changing land use practices that influence the way water runs off landscape. He said urban development opportunities and better farming opportunities may have influenced the speed of water run-off into water basins within the region.

“We can’t look back and say we’ve got to change all that,” he said. “So how do we mitigate that?”

He said erosion from riverbanks, streambanks and bluffs are the dominate source of sediment in the river basin with 60% of portions attributed to increased precipitation.

For now, he said the biggest benefit would be increased cover crops on farm fields during the early spring, including a reduction in tillage and nutrients. Once summer crops are set, these can help soak up water during heavier periods of rainfall.

He said increased artificial drainage in rural and urban areas and more wetlands may also increase the amount and speed of sediment and water flowing into rivers. Decreasing impervious surfaces and large parking lots in cities – in combination with businesses increasing natural foliage in these areas – may also help with the issues.

“We all have a choice to make and we all have a role to play in this together,” he said. “To address the water quality issues we still have a long way to go.”

Cords addressed strategies that he said the public should take into consideration, and how these strategies could be considered favorable by the public statewide. He said what works for one farmer may not work for another and that communities need to be adaptive.

“If they have our strategies and they have our science, they can develop their own plan at the local level and say ‘okay, these things are acceptable to us,'” he said.

Cords said the MPCA, as a state agency, will provide its informational resources and strategies to localized communities to determine how an action plan can be best implemented within their region and practices.

“Ideally I’d like to see far more wetlands because that is the best filter out there for water,” Gad told Cords.

Gad said the increased usage of tiles used for drainage on farmland contributes to the decrease of wetlands in the state.

“The action plan is next step in this process,” Cords said. “In the Watonwan [River Basin] they are now doing the local plan itself.”

“If they have our strategies and they have our science they can develop their own plan at the local level and say ‘Okay these things are acceptable to us.”