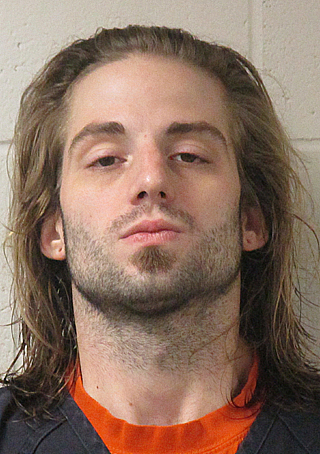 According to court documents, Brown County Sheriff’s Deputy Murphy was on the early Monday morning shift when a phone call was received at 6:07 a.m. from a caller who works at Hanska Repair, 201 2nd St. W.

The caller said a few minutes later, Barnhart walked on the sidewalk in front of the shop and the caller, who knew Barnhart, asked him why he had been in the vehicle. He said Barnhart denied it at first, then said he was sitting in the vehicle, making a phone call.

The caller said Barnhart took photos of his truck and told him he better watch out. The caller phoned law enforcement a short time later and said the hood and engine of the vehicle were still really hot, so he knew it had been running.

The deputy looked in the vehicle and nothing appeared to be damaged but noticed fresh tracks in the mud, fresh mud on the tires and some grass that had been driven over when the vehicle backed from its spot.

Officers reviewed security video footage from a camera outside the shop and noticed a person walking between the semis, then the headlights from a Buick came on, the vehicle left at about 4:57 a.m. and returned at about 5:35 a.m.

The video showed a tall, thin person walking beween the semis at about 4:56 a.m., headlights turned on and the vehicle was driven south down the alley.

Brown County Investigator Jeremy Reed recorded clips of the incident. At 2:30 p.m., Reed returned to Hanska Repair and asked the caller what he saw. The caller said the suspect wore the same shorts as depicted in the video and that Barnhart threatened him as if the caller had done something wrong.

Reed went to the Barnhart’s residence, noticed him with his hair up in a bun, like the man in the Hanska Repair video at 4:56 a.m., with a phone in his ear.

Reed radioed for more officers when Barnhart came out the back door yelling “what the — you want.”

Reed said he told Barnhart he was under arrest but Barnhart did not comply at first. Reed eventually handcuffed Barnhart and escorted him to an unmarked squad car, placing him in the back seat.

Barnhart continued to complain, according to the report calling Reed a number of names and saying he hoped he would die. Barnhart was released from jail on a $2,000 bail bond with conditions Tuesday.