Squeezebox, Mollie B happy to be back at Blast 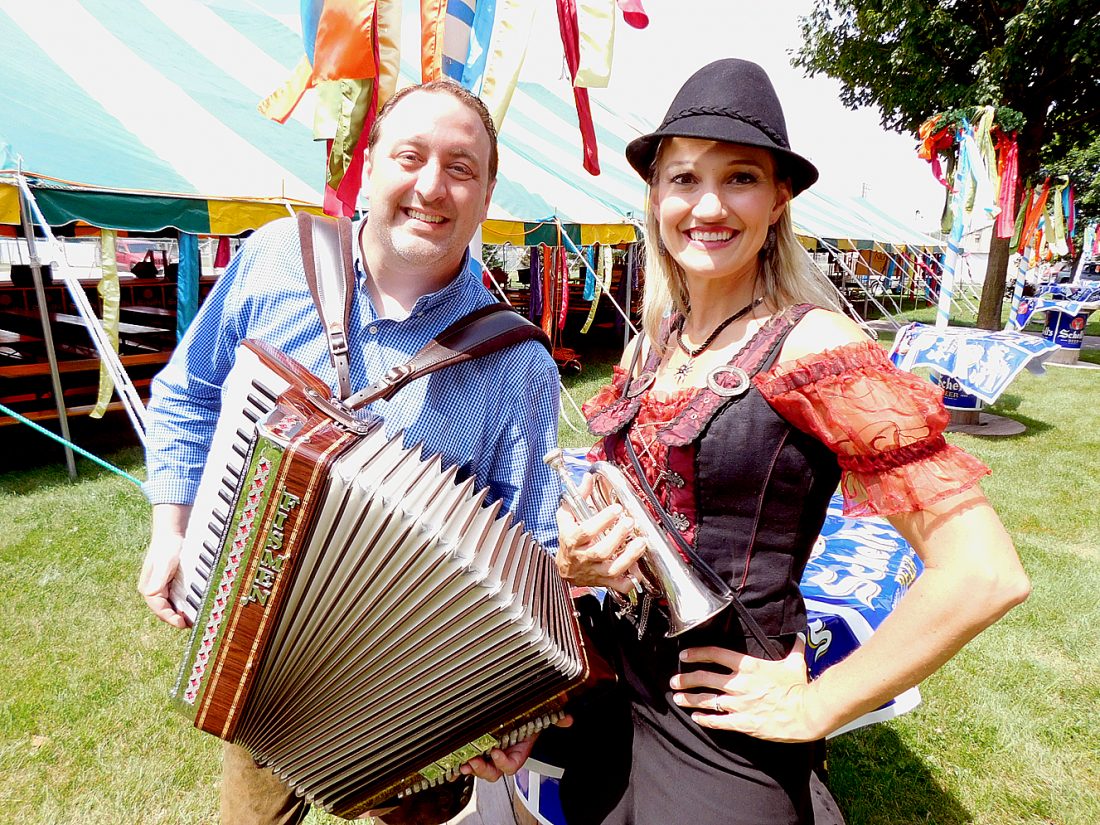 Staff photo by Clay Schuldt Ted Lange and Mollie B stands outside the Bavarian Blast tent waiting for the festivities to begin.

NEW ULM–Squeezebox with Mollie B is back in town for Bavarian Blast.

Mollie B and Ted Lange first formed the group in late 2005 and began playing as Squeezebox and Mollie B in 2007.

The musical group has been a mainstay of the festival. Neither Lange and Mollie could remember how many years in a row they have attended the festival. Squeezebox player Ted Lange estimates its been close to seven years.

Mollie B said she especially loves the kids dressed as Heinzelmänchen who roam the crowds. “I’ve never seen that before in other communities,” she said. “They’re excited and it really gets passed on to the audiences.”

Asked what it is like to be among the top polka performers in the world Mollie B said “we don’t see ourselves that way. We see it as our passion.”

Lange said it is an honor to be recognized along with other polka legends, but agreed it is a passion.

Mollie B and Lange both caught the passion at a young age. Mollie was attending polka festivals at a young age. Her parents would take her to a polka performances and she would spend the next 12 hours dancing.

Lange said he was born into polka music. His parents had a band that was popular in Northwest Ohio and Southeast Michigan.

Mollie B explained she loved polka because it is happy music that keeps people going. Even when a song has a sad subject matter, it sounds happy and upbeat.

Lange said the happy and upbeat nature of polka comes from the tradition of helping people get away from everyday stresses for a while.

Asked if they believed polka music was experiencing a renaissance in popularity, Mollie B said it did sometimes seem to be true.

“I was at a festival in La Crosse, Wisconsin and I asked the crowd if they loved polka music, and all these college students yelled back they loved to polka.”

It was surprising, but with German festival around the country, it has raised the profile for polka music, which is filtering down to the younger generations.

Lange and Mollie also credit “Mollie B Polka Party” television show with broadening their audience. Mollie serves as creative director and co-producer of the show, which airs on RFD-TV. The popularity of the show ensures that where ever they play, they will have a crowd at performances.

Squeezebox and Mollie B will perform Friday, Saturday and Sunday of Bavarian Blast. During a performance, Mollie B can be heard playing several different instruments. Asked which instrument is easiest to play, she said the alto-saxophone was relatively easy to learn. She admitted after years playing the piano can still be a challenge but the Alp Horn is the greatest challenge because it requires a lot of wind power to play.

On Sunday, Squeezebox and Mollie B will hold a special 10 a.m. polka church service. They will play traditional church hymns, but also incorporate a polka twist. The polka church service is a newer addition to Bavarian Blast, but it has proven popular.

“It’s very reverent and won’t take anything away from a normal service,” Lange said. “It’s a very uplifting experience.”

Mollie B said she likes to survey the different denomination attending the congregation that attends.

Following Bavarian Blast, Squeezebox with Mollie B will travel to Peterson, MN, Bastic, South Dakota and Decorah, IA before returning to Ohio for Hamler Summerfest.

The group will be releasing a new single soon titled “A Day to Say Thank You.” The song is for veterans. They co-wrote the song for the recent Clint Eastwood movie “The Mule.” The song was performed in a scene set in a VFW.