Re-enactors living life of an army unit this weekend 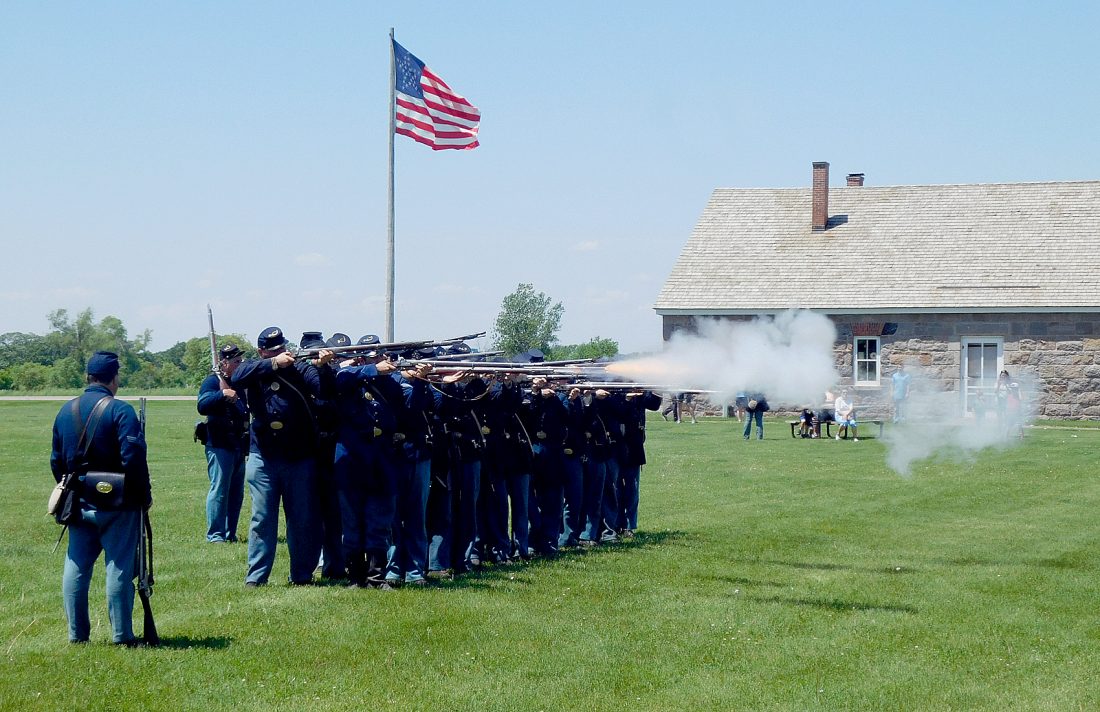 The men of Company B drill firing their rifles on the fort parade grounds.

The men of Company B drill firing their rifles on the fort parade grounds.

L to R Capt. John Marsh (Joe Beedle), John Aiton and Bill Hoskins discuss the risks and merits of President Abraham Lincoln’s strategy for bringing the Confederacy back into the Union. Marsh is hopeful the men station at Ridgely will be able to join the fight down South. Aiton ponders whether he should leave his farm and join the Union.

AIRFAX — Those traveling to Fort Ridgely State Park this weekend were also traveling back in time.

Company B military re-enactment was camped out at the fort from Friday to Sunday. It is the closest visitors can come to experiencing Fort Ridgely life during its peak use in 1862.

A total of 36 men in Civil War era outfits took over the fort parade grounds. Several of the re-enactors were portraying real people who served in the area. Joe Beedle played Captain John Marsh, the commander of the fort.

Beedle said they were attempting to recreate the experience at the fort as it was June 8, 1862. This would have been over two months before the outbreak of war between The U.S. and Dakota people. 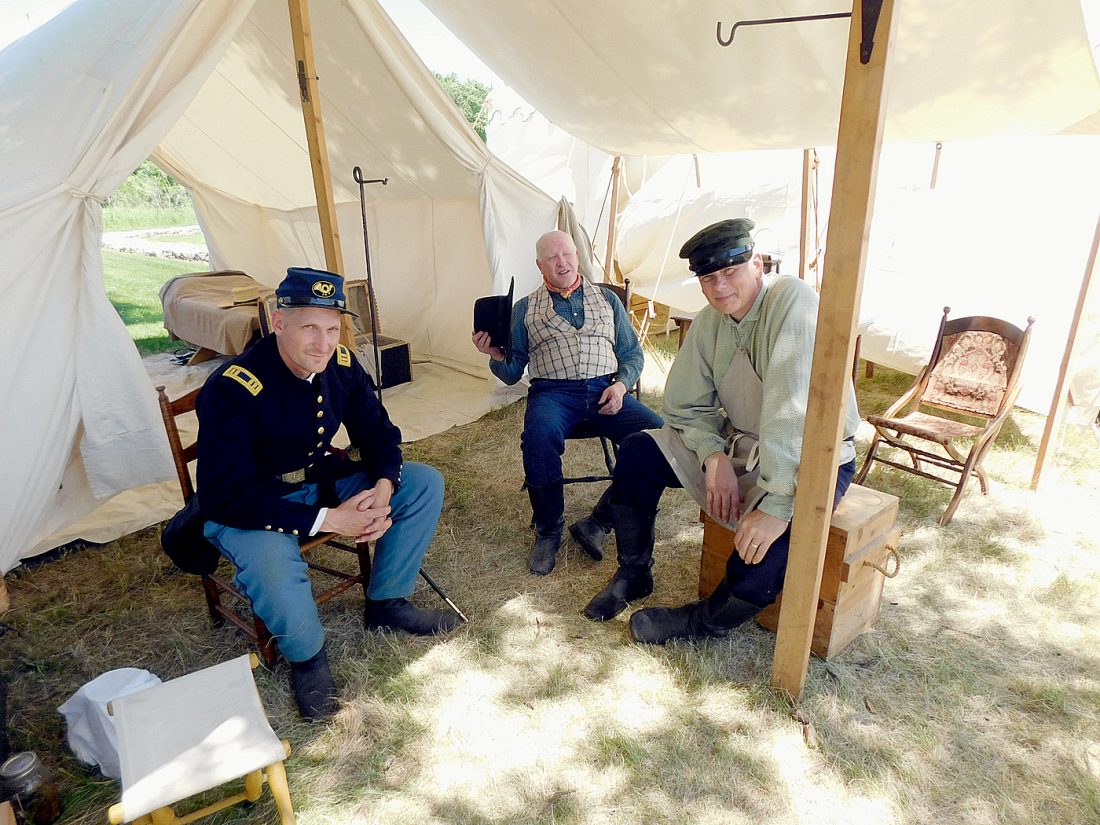 L to R Capt. John Marsh (Joe Beedle), John Aiton and Bill Hoskins discuss the risks and merits of President Abraham Lincoln’s strategy for bringing the Confederacy back into the Union. Marsh is hopeful the men station at Ridgely will be able to join the fight down South. Aiton ponders whether he should leave his farm and join the Union.

Beedle said one of the best parts of conducting a reenactment at Fort Ridgely is that it’s one of the few areas where a battle took place in Minnesota.

“You do get a picture of what it looked like back then,” he said. Most of the original buildings are gone, but the building footprint remains and it easy to imagine what the site looked like.

Part of the re-enactment involves recreating the soldier lifestyle. Members of the Company B took part in regular drills, which including marching through the parade grounds and practice firing both rifles and cannons.

Ryan Kelly, usually a Captain in the New Ulm Battery, played ordnance sergeant John W. Jones for the drill weekend. He took on the responsibility of training the company on how to fire a cannon.

Kelly said one of the fun parts of the weekend was bringing the cannon to the fort from the horse camp. He said seeing the horses pull the cannon across the prairie was an impressive sight to see.

When not practicing drills, the re-enactors took part in camp life. This year Company B had set up over 20 tents near the fort. During their free time, the reenactors would pass the time with 19th-century entertainment, like music and games.

A few men played catch on the parade ground in preparation for a game of rounders near the evening. Rounders was an early version of baseball. The parade grounds of the fort lent itself easily to baseball.

Others purchased items from the camp store. In 1862, it was common for a merchant to have a contract with the government to set up shop near a post. These men were called “sutlers” They were the 19th-century version of a military px store.

In 1862, the Fort Ridgely’s sutler was Ben Randall. He operated a store near the fort. Jon Vooroom portrayed Randall for the re-enactment.

“You could buy anything the army doesn’t provide,” he said. The merchant would also sell duplicate items in case the solider needed a second set of boots, a less itchy undershirt or an alternative food to army rations.

The sutler shop was a new addition to this year’s Company B weekend. The event has grown in size since 2017.

Bentler said Fort Ridgely is important because it is a Civil War era battlefield.

The Company B military re-enactment does bring visitors in from all over the state.

Bentler said several visitors came to the Fort on Friday to see the re-enactors arrive. A large crowd came to see the cannon brought into camp Saturday morning.

Company B will remain at Fort Ridgely until 1 p.m. Sunday.

A ray of good news sunshine