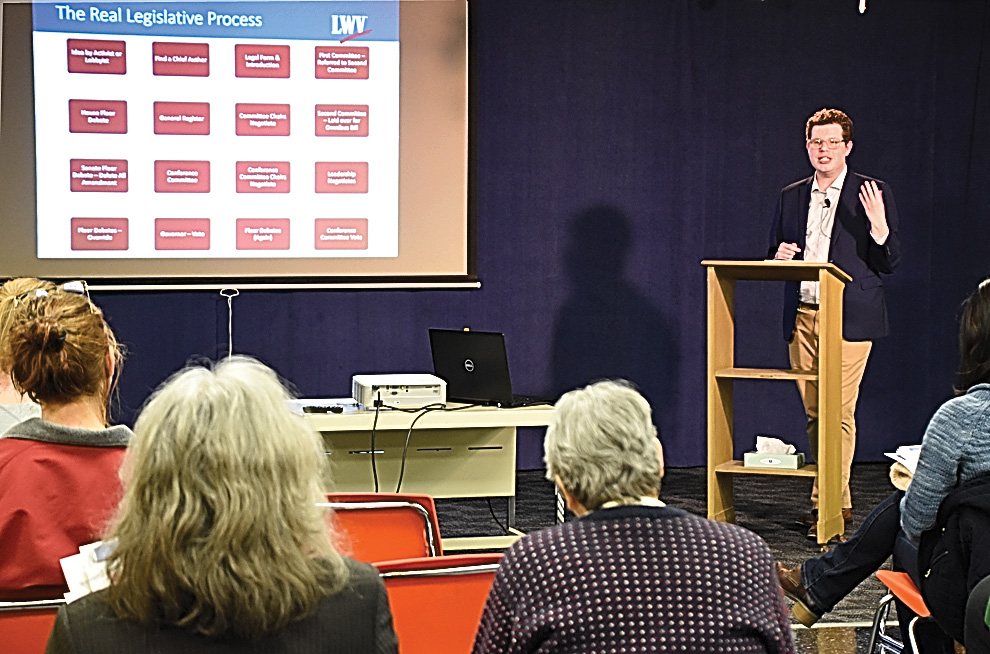 Staff photos by Gage Cureton Nick Harper, lawyer, lobbyist and civic engagement director for the League of Women Voters Minnesota, informed the public about Minnesota legislative processes and how bills pass through the Minnesota House of Representatives at the New Ulm Public Library Saturday.

NEW ULM — Members of the community had the chance to expand their knowledge on Minnesota’s legislative process at the New Ulm Public Library Saturday.

Nick Harper, lawyer, lobbyist and civic engagement director for the League of Women Voters Minnesota, held a presentation and public discussion on the Minnesota legislative process and the duty of citizens to engage in government.

Harper’s presentation, “MN Legislature — Building a Process for the People”, detailed the journey of a proposed bill going through a traditional legislative process — committee to committee and floor by floor.

As an example, Harper used an omnibus bill in his presentation. An omnibus bill is a bill that proposes a variety or mix of changes to existing statutes or subjects. Sometimes these bills can be hundreds of pages in length.

Harper explained that this compilation of proposals can be difficult for legislators to read entirely, due to restraints in time during sessions.

This can sometimes lead to legislators voting to pass proposals without even reading or being aware of what they are passing.

However, Harper said that omnibus bills can sometimes be beneficial. He said the compilation can simplify the legislative process and ease negotiations, but citizens must still stay informed on what’s going on in Minnesota’s government.

“Public participation is vital to any democratic government,” Harper said. “And for a system of government that’s been as focused on the people as America’s has been, and for a state that’s civically engaged as Minnesota, we really should prioritize making the legislative process accessible.”

Harper answered questions from those attending the presentation and discussion. He urged citizens to contact their government personally.

“If you want your voice to be heard and matter there’s a certain time where you need to contact your legislator.”