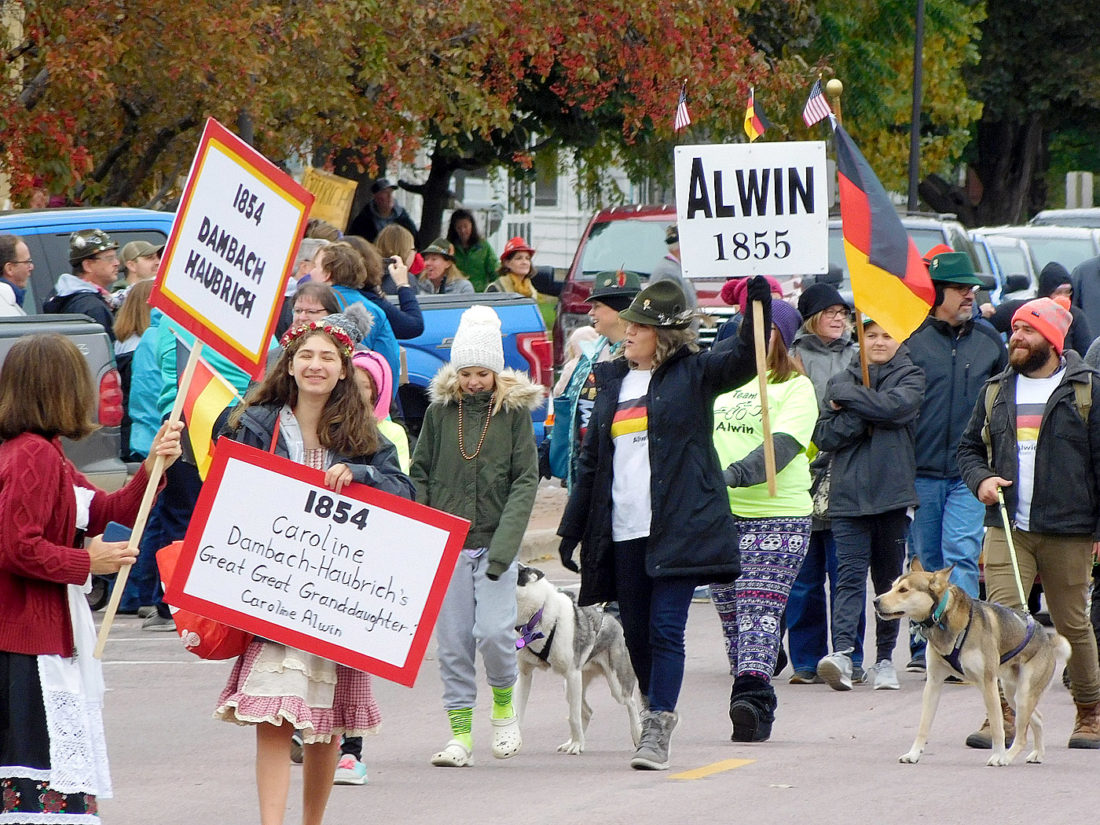 Staff photo by Clay Schuldt The German-American parade featured several native New Ulm families marching with signs identifying when their German families immigrated to town. The Dambach-Haubrich and Alwin clans arrived in New Ulm only a year apart. See more photos of Oktoberfest events on page 6B, and on cu.nujournal.com

NEW ULM — On Center Street the air was filled with the sound of polka music, the smell of cheese curds and the sight of grown men in lederhosen. This could only mean it was Oktoberfest weekend.

Despite colder than normal weather, the downtown Oktoberfest celebration saw a huge increase in turnout from last year. Chamber of Commerce staff and volunteers said that even though it was chilly, there was no rain and the Schell’s beer helped take the bite out of the cold.

This year’s Oktoberfest celebration flipped the tradition by placing the stage on the other end side of Center Street closer to Bank Midwest. In addition, both sides of Center Street were blocked off for the celebration instead of just the north side of the street. The orange plastic fence divider was no longer needed. This let the crowds spread out more, reducing congestion and as result people stayed longer.

The Optimist Club’s Cheese Curd stand saw a record number of sales. The club sold out of cheese curds halfway through the day, which means visitors consumed 80 pounds of cheese curds.

The Chamber was able to sell a high number of commemorative beer mugs. By 4 p.m., Cara Knauf said 12 cases worth of mugs were sold.

Many of those attending the celebration were veterans of New Ulm Oktoberfest’s past, but a few new comers were in attendance. According the Chamber’s guest book visitors from California, Canada and even Brazil have come to town.

The Bunge family of Waterloo, Iowa had never attended before. John Bunge said his son, Garrett Bunge, recently moved to New Ulm and after conducting research on the town found out about the Oktoberfest celebration and decided the whole family should attend.

Garrett Bunge has only been a resident of New Ulm for three months, but he has already become heavily involved in the community. Through his co-workers at 3M, Garrett join the Concord Singer. He is one their newest members, having attended practices for only month, but the Concord Singers already have him dressing like a New Ulm native.

The first weekend of Oktoberfest may be over, but next week the celebration starts again.

The second weekend of Oktoberfest celebration starts 5 p.m. Friday, Oct. 12 at the Best Western/Green Mill with the Concord Singer once again kicking off the music.

Saturday, Oct. 13 a second Oktoberfest Parade will kick off the downtown celebration at 11 a.m. This year the parade will be a costumed themed. People are encouraged to don lederhosen and join the parade.