Author, researcher of the unusual talks about his work 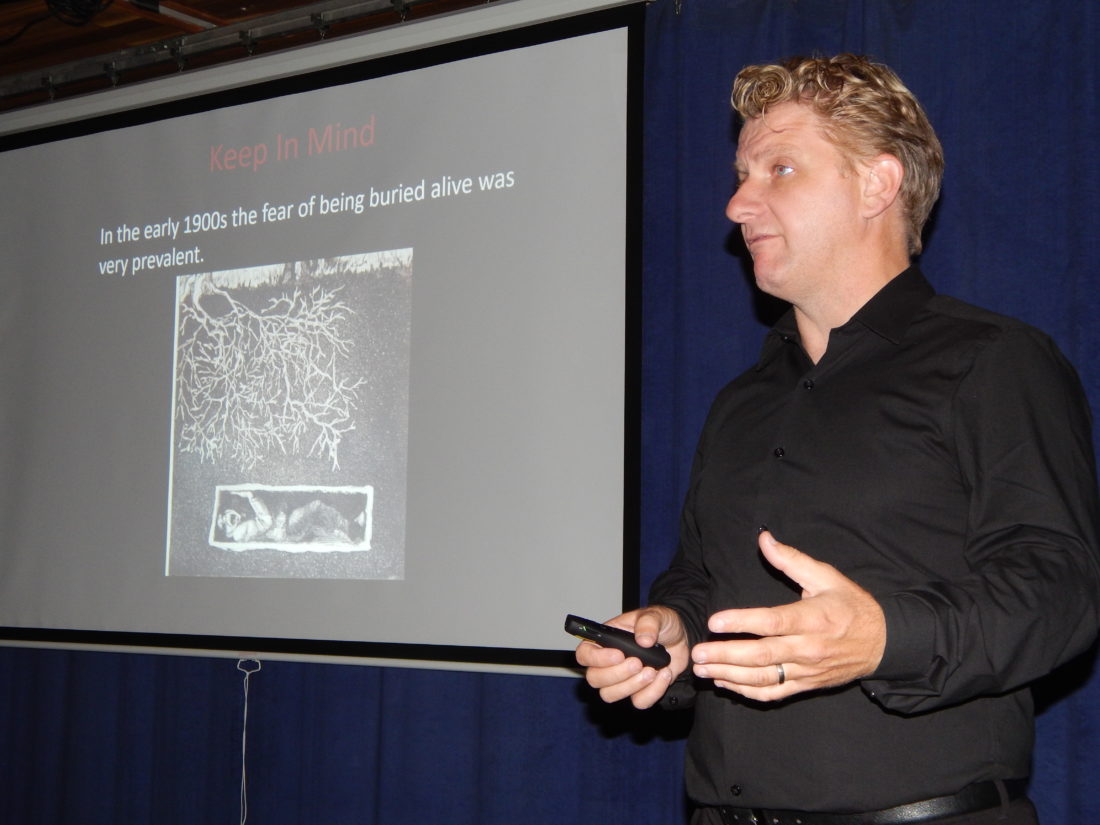 NEW ULM — A researcher, author and lecturer of strange and unusual topics talked about his life’s work at the New Ulm Public Library Thursday night.

Chad Lewis of Eau Claire, Wis., has degrees in psychology but for more than 20 years, he has traveled the globe looking for unique and bizarre stories and history.

His searches have led him to looking for Bigfoot in Canada and the United States, finding a casket with a spring-loaded lid and haunted places in many states plus a haunted cemetery near Jackson.

He’s studied crop circles and looked for “Nessie” the Loch Ness Monster in Scotland in a boat with sonar and underwater cameras.

“UFOs, alien abductions, weird people and places, you name it. If it’s strange, I’ve probably been there,” Lewis said. “What I’ve found out in my travels is that sometimes the weirdest things happen right in your own backyard.”

He took a tour of some of Minnesota’s most bizarre things.

“If you believe the national media, all Minnesotans live in the Twin Cities, are crazy Vikings fans and Fargo is in Minnesota. Everyone has a cabin and is extremely nice,” Lewis. “I’m talking about more sinister Minnesota history like bizarre deaths, ghosts, weird people and UFOs.”

Bizarre deaths included obituaries. Today’s newspapers read that an old man died peacefully surrounded by his loving family.” Lewis cited obituaries written in the 1800s that read “his suicide was gruesome. The whole top of his head was blown off by a shotgun blast.”

A man in Albert Lea was in a movie theater and saw a girl he was going with accompanied by a fellow suitor. She wouldn’t accept his note, so he took out a pistol, shot himself and died, Lewis said.

In addition, he told stories of people dropping dead from fright from things like severe storms, a horse that broke loose, or an accountant who was $150 short in an audit and dropped dead on the spot.

“A century ago, people were terrified of being buried alive,” Lewis said. “Thousands of people were buried alive, sometimes while in shock or a coma, when doctors pronounced them dead. Many people popped up out of a casket just in the nick of time at their own funeral.”

An interesting invention regarding the issue was a spring-loaded coffin that would allow someone buried alive to pull a string and the lid would spring up and give the person some air.

Lewis said his favorite invention was a cemetery bell on top of a grave. Tugging a rope would ring a bell and a cemetery caretaker could come and rescue a buried person.

“On windy nights, the wind would set the bells off, giving the caretaker quite a scare that everyone was buried alive,” Lewis said. “Often times, a century ago, family survivors would sit around the grave for hours in case the bell was rung.”

Lewis said those looking for a haunted place in Minnesota should visit Loon Lake Cemetery.

“Actually, I recommend you don’t go there. The locals call it Witch Cemetery,” Lewis said. “The legend is, years ago, a woman was practicing witchcraft. Someone grabbed an axe and chopped off her head.”

Lewis said the old abandoned, vandalized cemetery with unmarked graves will give you bad luck until the day you die if you walk or jump over the witch’s grave. In addition, he said people have died shortly after visiting the cemetery.

Lewis told another story, of a doll illuminated at night in an attic window in a Janesville house that appears to come alive and watch passers-by. He said the doll is now in a museum window in town.

His books include “The Most Gruesome haunting of the Midwest” and “A Minnesota Reader’s Guide to Haunted Locations.”