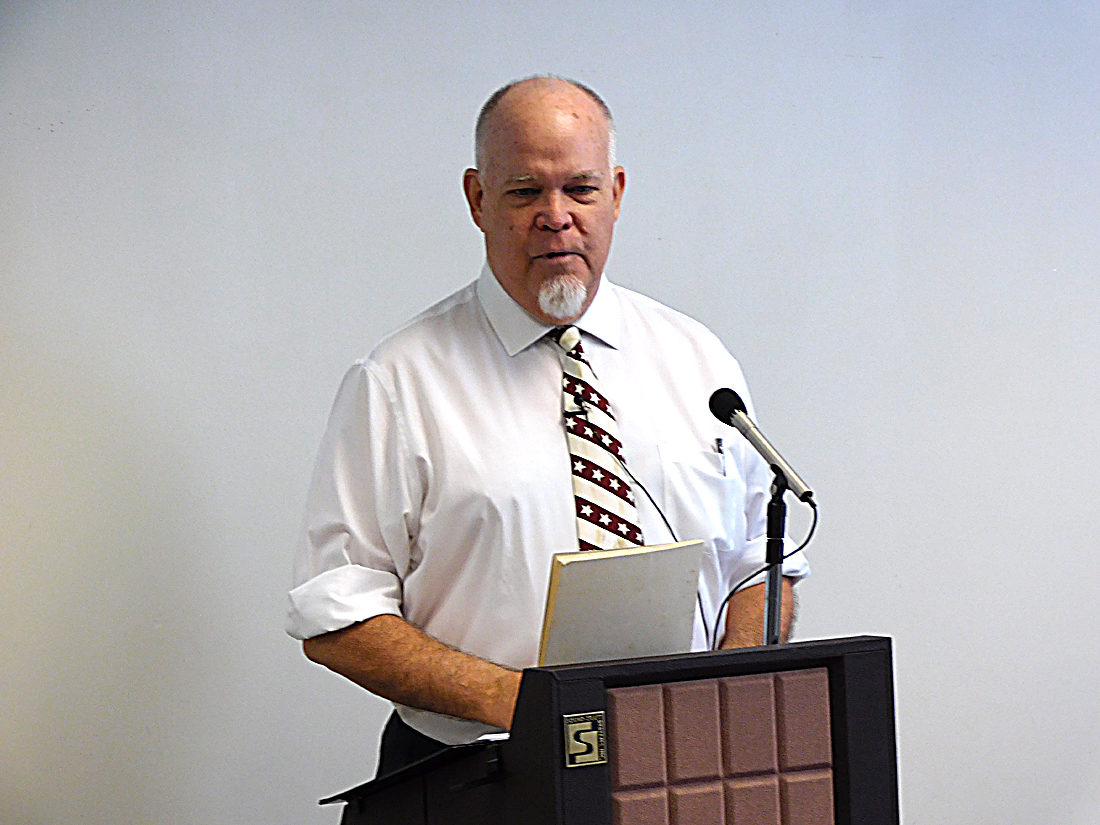 The presentation was given by Lehman’s grandson Raymond G. Lehman III.

Lehman was born in Sleepy Eye in 1895. His career in the military began in WWI, but the war ended before he deployed. Lehman was a career military man. By the time WWII began, he had reached the rank of general. In 1943, he was asked by the Roosevelt administration to take command of the 93rd Infantry Division, which was an African American division.

The military was still segregated during WWII. Many white people felt black soldiers could never be trained and were un-American. But since the United States was fighting a war on two fronts, the country needed all the manpower possible and began recruiting African American soliders.

The 93rd Division was originally stationed at Fort Huachuca in Arizona and consisted of 16,000 African American troops. At this camp, the 93rd Division was treated to extreme prejudice from the white officers and local citizens. Morale and discipline amongst the troops were extremely low.

Lehman’s grandson showed the audience an army manual from the time called “Leadership and The Negro Solider.” This manual was standard issue during WWII, but in later years was deemed so racially insensitive that most copies of the manual were destroyed.

This was the environment in which Gen. Lehman took command of the 93rd Division. The previous commanding officer did everything possible to minimize what black troops were allowed to do.

Lehman said his grandfather lived a life void of discrimination and ill will toward others. Twenty years before the Civil Rights movement, Gen. Lehman worked to prove African American soldiers were as capable as white soldiers.

One of Gen. Lehman’s first acts upon taking command of the 93rd, was to issue a survey among the troops to identify the problems. The survey indicated the African American troops wanted to fight the racist southern whites more than the Japanese. This told Lehman black troops were willing to fight, but needed be taken out of the racist element of Fort Huachuca.

Lehman had the 93rd moved to a desert location at the California-Oregon border and ordered the division to build a new base in which they would train.

Allowing the black troops to construct their base gave them greater stakes in training and a place to train away from discrimination.

The base also included a theatre space for entertainment. Unlike white soldiers, it was dangerous for black soldiers to go out on leave into the nearby towns where they faced discrimination. To compromise, Lehman made sure the entertainment was brought to the troops. There are several photos of the 93rd meeting boxer Joe Lewis.

Lehman also worked to integrate the division. For every white officer on base, there were three black officers. In the event of a court marshall, at least one black officer would be on the court.

In six months, Gen. Lehman was able to turn morale around and create a strong military division.

By 1944, The 93rd Division was deployed into combat in the Pacific. Their first mission was in Bougainville, south of New Zealand, in which they needed to secure a trail. The mission was successful, and the division took few casualties. By the end of the war, the 93rd Division had achieved numerous accolades, including 825 medals of valor. At the end of the war the division secured the surrender of 41,000 Japanese troops and civilians.

Unfortunately Gen. Lehman was unable to be with the division at the end. He was discharged from the army for medical reasons in August 1944. After leaving the army he was debriefed on his actions. The military wanted to know how he had managed to create a combat ready division of African American troops, something previously deemed impossible.

Lehman was interviewed by “Time” about training African American soldiers. In the interview he said black troops showed “the same courage, fear and fighting spunk of any soldier.”

The quote caught the attention of early Civil Rights leaders, and Lehman is remembered today as an early advocate of equal treatment of all Americans.

After the presentation, Lehman was asked why his grandfather had such a progressive stance compared to his contemporaries.

Lehman could not say for sure, but said his grandfather was not an angry man and did not judge people based on race or ethnicity. Gen. Lehman was a Catholic and his religious upbringing could have played a factor.

Lehman III told of an incident from his youth in which he encountered racially segregated bathrooms which used racist language identifying the black bathroom. When he spoke to his grandfather about the incident, the general said “someday you will understand all men are created equal.”

Lehman wanted to present this story to the people of Brown County to let them know one of their native sons was an early influence on Civil Rights.