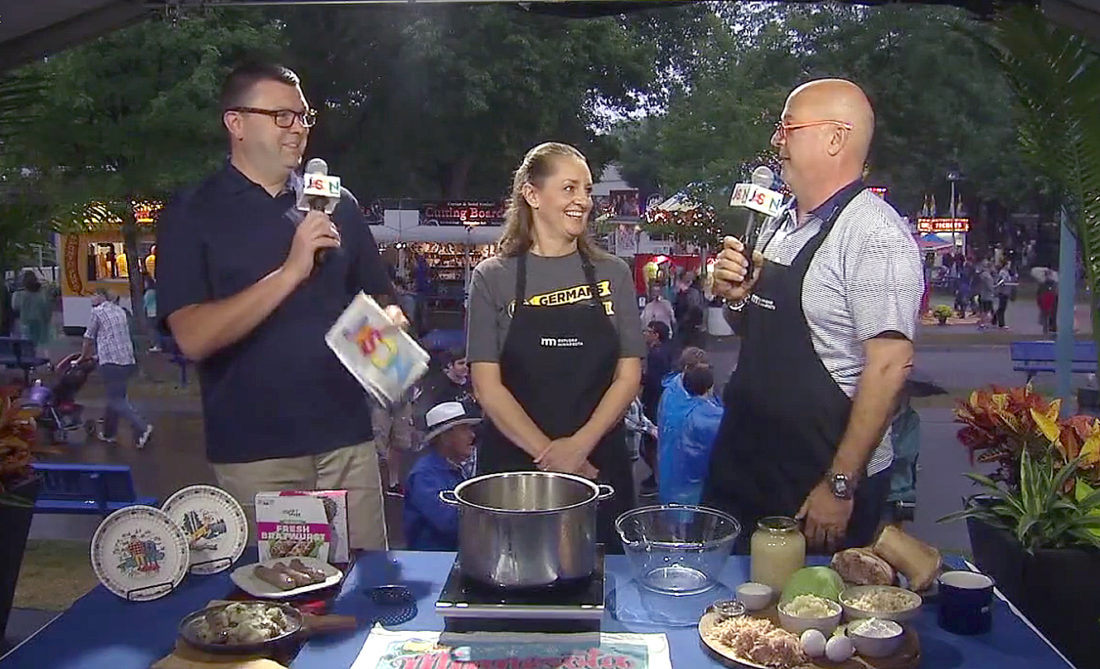 Video Screen shot from The Jason Show Darcy Schmidt of New Ulm was featured Monday at the Minnesota State Fair on The Jason Show on Fox 9. Schmidt’s old family recipe for sauerkraut and dumplings was the winner of the “Folklore: The Quest for Legendary Recipes contest” put on by Explore Minnesota Food Network star Andrew Zimmern. From left are host Jason Matheson, Schmidt and Zimmern, one of the judges of the contest.

NEW ULM — An old family recipe was a winner for Darcy Schmidt of New Ulm at the Minnesota State Fair Monday.

Schmidt was announced as the winner of the “Folklore: The Quest for Legendary Recipes” contest hosted by Andrew Zimmern and “Explore Minnesota.” Zimmern presented the cook and her family recipe on Monday on “The Jason Show” live from the Minnesota State Fair.

Darcy Schmidt found the information for the Folklore Recipe contest online and decided to submit her grandmother Eleanor Kretsch’s recipe for sauerkraut with potato-bread dumplings. It was a winning combination, decided Zimmern along with his fellow judges, who raved about the locally-produced ingredients such as cabbage and hocks, and the preservation of a traditional German-Minnesotan dish. They especially admired that Darcy Schmidt did not use one single canned or otherwise preserved item, but even baked her own bread for the dumplings.

Darcy Schmidt, who works at Legal Professionals, says she did not expect the victory.

“I was completely caught off-guard when I got the email telling me that I won. I was like, ‘Wait, is this real?’ I even forgot that I had entered the recipe. So it was a surprise. A happy surprise, but a surprise nonetheless.”

Darcy Schmidt had learned the recipe, which has always been one of her favorites, from her grandmother, who taught her how to prepare the sauerkraut and dumplings when she was 17.

“Grandma never used measurements. She always just said that you need to make sure that the ingredients complement each other. So it took me almost 15 years to get it just right,” she says jokingly. “The secret to a good kraut is to me the pork hocks, which have a bit more fat and thus more flavor. And you want to make sure to cook the kraut six hours at the right temperature to get the right texture and flavor. As for the dumplings, I think it is key to use fresh bread, because it absorbs the taste better.”

She only had good things to report about Zimmern and Jason Matheson, the host of “The Jason Show.”

“Andrew was so nice and very easy to talk to. He is a really down-to-earth guy, as is Jason. They were both really, really nice to me,” Darcy Schmidt said.

Sarah Warmka, who works at the New Ulm Chamber of Commerce, is happy about Darcy Schmidt’s victory as well.

“I posted the contest information in the “New Ulm Now and Then” Facebook group, where it got a lot of responses. So we posted the video from the Monday broadcast from the State Fair in the group as well. We were excited when Darcy won, so we sent her, Andrew, and Jason gift baskets with sauerkraut, a ‘Germans have more fun’-T-Shirt, and a Schell’s beer stein among other things.”

When asked if there was anything Darcy Schmidt wanted to tell New Ulm people, she responded that it is important to keep up traditions.

“I always tell people that they should take pride in what they are cooking and in doing it the traditional way. So keep up the family traditions and recipes and teach kids how to do it properly, without microwaves or the like, and keep making kraut!”