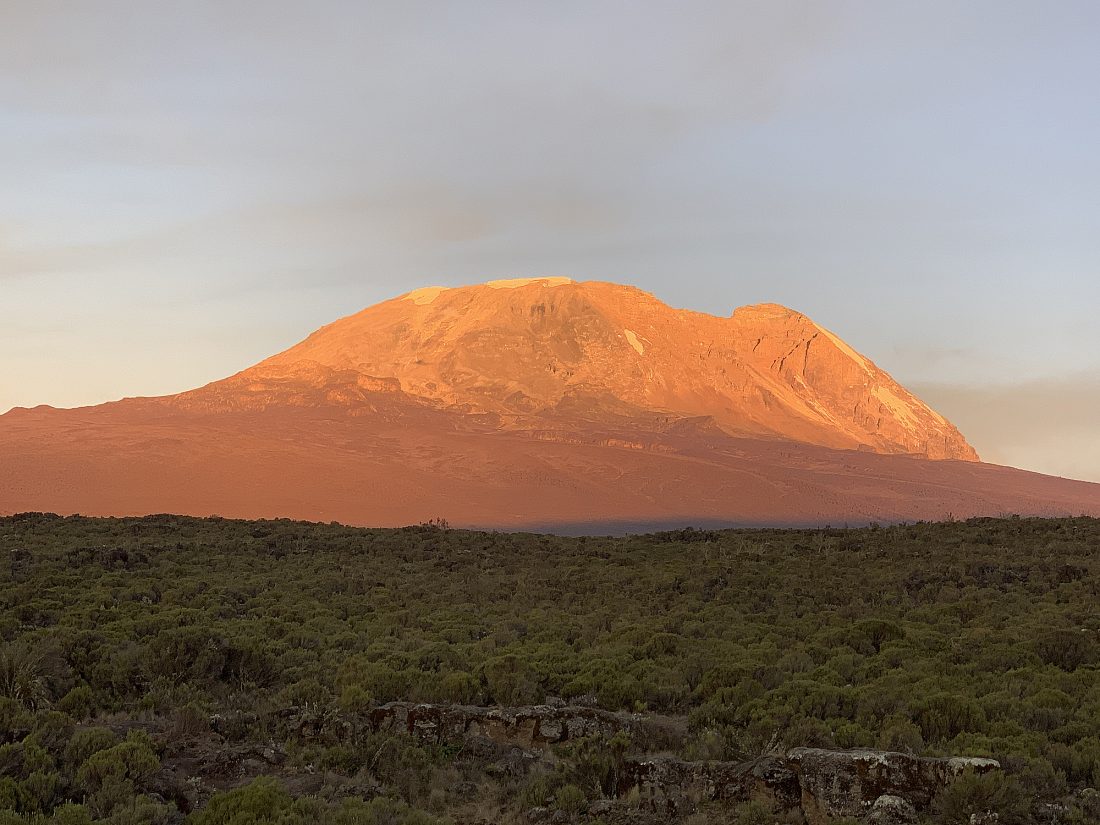 Mt. Kilimanjaro is the highest mountain in Africa with an elevation of 19,341 feet. (Photos courtesy of Lori Howard)

Lori Howard and her two daughters Nicole and Teresa pictured at the summit of Mt. Kilimanjaro in Tanzania.

Hikers walk along the trail on Mt. Kilimanjaro in Tanzania.

Lori Howard and her two daughters Nicole and Teresa are pictured along the route to the summit of Mt. Kilimanjaro.

Mt. Kilimanjaro is the highest mountain in Africa with an elevation of 19,341 feet. (Photos courtesy of Lori Howard)

NEW ULM — For Lori Howard, climbing some of the world’s highest mountains is just the type of challenge she’s looking for.

In August, Howard climbed Mt. Kilimanjaro with her two daughters — completing one of her life goals.

“I had always said that when I turned 40 I was going to climb Mt. Kilimanjaro,” Howard said. “I don’t know how it ended up on my bucket list except to say that I’ve always been someone who’s taken on challenges and I think at some point I decided this is a challenge I wanted.”

Mt. Kilimanjaro, located in Tanzania, is Africa’s tallest mountain with an elevation of 19,241 feet. With about seven official trekking routes to ascend to the summit, Kilimanjaro is a popular destination for mountain hikers.

Howard jokes that while she’s always willing to take up a challenge, she doesn’t want to risk her life climbing daunting peaks such as Mt. Everest. 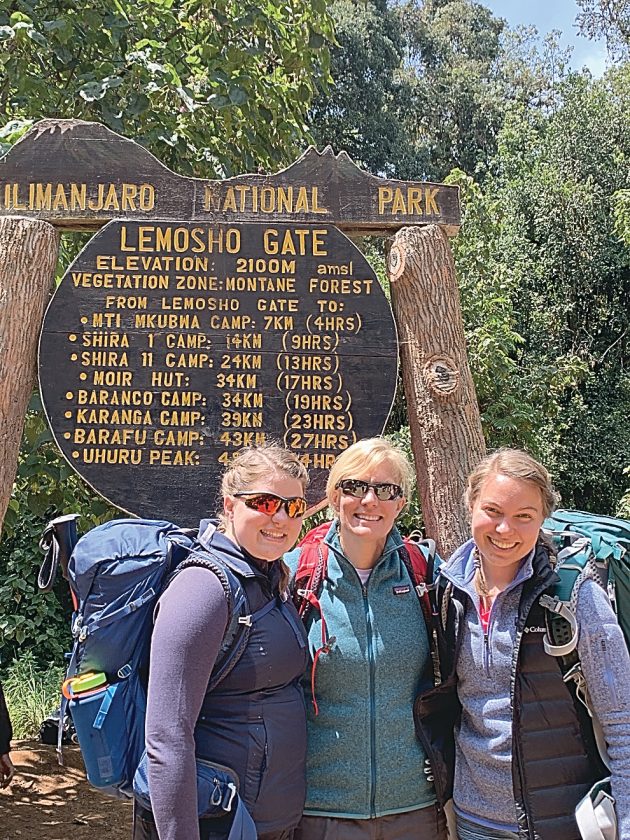 Lori Howard and her two daughters Nicole and Teresa are pictured along the route to the summit of Mt. Kilimanjaro.

“I never wanted to die, so Everest was not on the bucket list,” Howard said with a laugh. “Kilimanjaro was challenging, but doable and exciting.”

Physical preparation for the exhibition began earlier this year in February with Howard training to compete in a half Ironman — another item on her bucket list that she was able to cross off, she said.

Including the opportunity to tie two of her life goals together, Howard said the trip to Tanzania with her two daughters sort of fell into place.

Before the initial planning of the trip, Howard’s daughter, Nicole, was working on solar energy as an engineering intern in Tanzania. Her other daughter, Teresa, who Howard describes as the “hiker of the family,” also decided to join her mother for the climb to the top of Africa’s tallest peak.

With Nicole already in Tanzania, and Teresa expressing her interest to climb Kilimanjaro, Howard remembers thinking: “it’s meant to be, it’s a sign.” 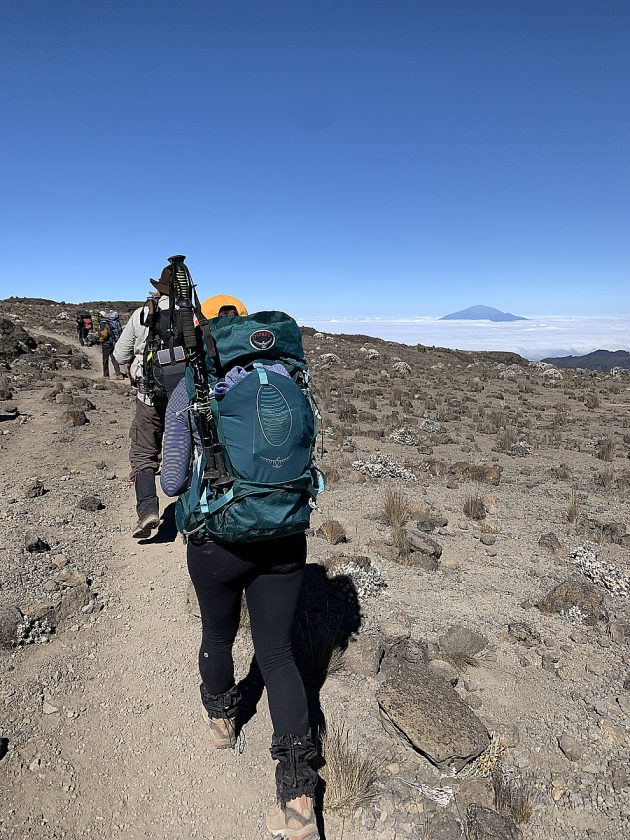 Hikers walk along the trail on Mt. Kilimanjaro in Tanzania.

“The preparation started with the half Ironman,” she said. “That was how things began and that’s of course both swimming and running. Some people who planned this trip started longer than that, but of course the thing with this trip, I decided to do it literally four months before because that’s when my daughter got the internship. So we had no idea this was going to happen.”

Howard used the physical preparation for the half Ironman as a means to get in shape and prepare her body for the taxing hike awaiting her in August. With about a half a year to prepare, time was of the essence.

“It was that quick with the turn around,” Howard said. “Some people in our group who did the climb had been planning for a year or two to do this — training longer — but at the time I had already decided and agreed to do this half Ironman with my sister.”

While preparing for the half Ironman, Howard experienced a setback in her training when she injured her back a month before the half Ironman. She said she thought it was the “end of everything,” and that she wouldn’t be able to realize both of her goals.

However, after a recommendation, Howard set up an appointment with Shannon Barie, a physical therapist with New Ulm Medical Center’s Courage Kenny Rehabilitation Institute. 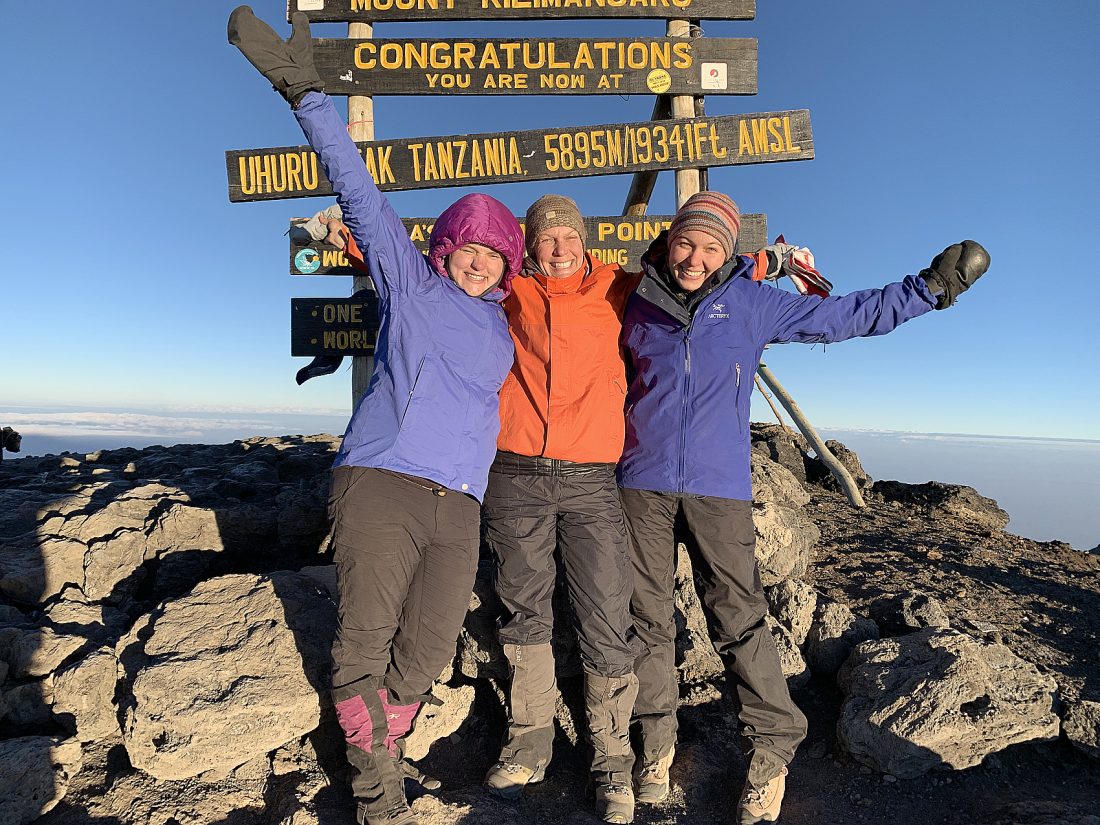 Lori Howard and her two daughters Nicole and Teresa pictured at the summit of Mt. Kilimanjaro in Tanzania.

“That was where New Ulm Medical Center came in, and that’s where Shannon Barie came in and gave me the mental determination to repair my body and allowed me to go forward,” Howard said.

Howard was quick to begin her rehabilitation process under Barie’s care.

“It wasn’t so much that she helped me physically get better,” Howard said. “She also let me understand my body and what it could do and couldn’t do. She helped me understand that ‘hey, you are strong and you can do this. With my health you can do it safely and not get injured and we’ll get through not only the half Ironman, but we’ll get you to the top of the mountain as well.'”

Howard said the healing process was slow and steady.

“It was one of those things where once I started to heal, Shannon got me on the road,” she said. “I came in, I think in the beginning, three times a week. A lot of this was with Shannon and we started it off with some core strengthening exercising and some stretching.”

After completing the half Ironman, and a few final weeks of preparation with Barie, Howard was off to Tanzania with her two daughters.

Howard said the first few days while climbing Kilimanjaro were difficult as her body struggled with the lack of oxygen because of the high altitude. She said she remembers every night was a mental process of her reassuring herself that she could indeed make it to the top despite the lack of oxygen. She said every day her hiker group’s pace slowed down as it got harder and harder to breath.

“When we hit aero glacier camp, which was at 16,500 feet, we had to do our hardest day which was 16,500 to 18,500, and that was where we did the western breach,” Howard said. “The western breach was basically a rock wall, climbing straight up, and I would say that was even harder than the summit itself.”

After battling nausea, mild headaches, difficulty breathing and fatigue, Howard and her group finally made it to the top of the mountain.

“Once we reached the summit it was one of those things where on one hand you don’t think you’ll be emotional because it’s just a hike, but I think the physical exertion, the long days and early mornings and everything just makes you very emotional. It was a wonderful moment to share with my two daughters,” Howard said.