While soccer continues to grow in Southern Minnesota, the sport is now facing A Shortage of Officiating

Lack of officials has given the SCMSOA a cause for concern 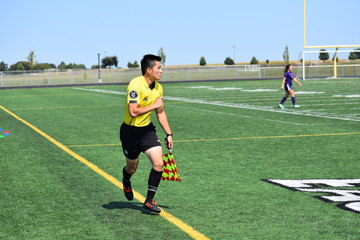 Staff photo by Jeremy Behnke Jiacheng Liu is a young soccer official who has recently started officiating. The Martin Luther College student has been working soccer games for two years and the South Central Minnesota Soccer Officials Association is actively trying to recruit more members to help with officiating games.

NEW ULM — While soccer has seen its participation numbers increase over the last 10-15 years at the local levels, the biggest problem might not be with coaches or players, but instead those who officiate the game.

Like most sports, the number of qualified officials to supervise the game could improve dramatically. But the problem is that there aren’t enough people that want to go through the training to become certified for a sport that is on the rise.

New Ulm’s Myron Fluegge is a veteran official/referee in five sports. He is active as a registered official in softball, baseball, volleyball, soccer and basketball. He is also certified with the United States Soccer Federation (USSF) and with the Minnesota Youth Soccer Association. He has more than 40 years of officiating experience in various sports, but at the age of 73, Fluegge knows that he will eventually pass the torch to the next generation of officials. The problem is, who will he pass it to?

While knowledge of the game of soccer is on the rise across the country, that also becomes a problem for fans who misinterpret the rules and then blame officials. Jerry Baerg, who serves as the assignor for the South Central Minnesota Soccer Officials Association (SCMSOA), said that some officials have quit because of the behavior in the stands.

“I think one of the biggest reasons is the behavior of fans,” Baerg said in an email. “If someone is paying a couple hundred dollars for a pair of Vikings tickets, they may feel entitled to voice their opinion to the professional referees. However, many referees at the youth and high school level are not in it for the money — they want kids to have an opportunity to play. Several referees have quit being referees due to the behavior of fans criticizing their calls — many of these criticisms are due to the fans not understanding the rules or the common interpretations of the rules. Youth players are not normally a problem, and very few referees quit due to player issues.”

Another problem is that not enough people know enough about the rules of the sport. They probably didn’t grow up with the sport and they don’t want to put the time into learning about soccer. That creates a need for younger referees, who grew up playing the sport but may not have time to officiate because of other commitments, such as college or jobs.

Fluegge said that having fans and parents understand the game is a good thing, but not in all cases.

“That’s maybe a positive and a negative,” he said. “It’s positive, because hopefully they understand the calls and so on. It can be negative if they think they know it as opposed to the official.”

Another veteran official said that many people don’t want to put themselves in a position where they could be yelled at by fans, which of course causes a problem in drawing officials. However, that problem isn’t limited to soccer, and bringing in qualified officials and keeping them in all sports can be a problem. But people are becoming more knowledgeable about the sport, overall.”

Fluegge said that there a number of younger officials coming up through the ranks, but there is a need across the state for officials as the number of high school teams and summer teams keeps growing.

“I can officiate three or four times without too much trouble,” he said. “There definitely there’s going to be a need for officials down the road. I can tell you that this last fall I did both volleyball and soccer, with the idea that I might be just a few years away from not being able to do soccer or basketball. I can still jog pretty good, but I’m moving toward volleyball for the fall.

“We’re definitely going to need officials down the road, first of all to replace some of us mature officials, but also the way things are growing, soccer is definitely here to stay and to grow even further,” Fluegge said.

Fluegge said that a majority of the officials in the SCMSOA are from the Mankato area. While that isn’t so much of a problem in Mankato and New Ulm, the number of teams in southwest Minnesota continues to grow, which means officials are needed to work at those sites. The travel from Mankato to Marshall or Worthington is long and some officials aren’t able to leave work to get to the games on time in those sites if they’re based in Mankato. There are a few officials in that territory, but not nearly enough.

“There is a lack of officials, we’ve got a couple of individuals from Worthington, Windom, and Marshall but our association, which is basically Mankato area, there’s a number of guys going out there [to the southwest Minnesota towns] and if that continues to grow, there’s going to be a need for more officials for sure,” Fluegge said.

New Ulm girls’ soccer coach Jonathan Johnson is also a former soccer official. He is aware that there is a shortage of officials at the youth levels and the high school level and he’s seen some problems with that shortage before.

“I personally have reffed higher level youth games alone due to referee availability,” he said. “We have played some varsity games with only two referees.”

The growing number of teams, both in high school and summer programs, also becomes a problem for Baerg, who assigns officials for the games all over south central Minnesota. With soccer games mostly on Mondays, Tuesdays and Thursdays, it becomes a problem getting enough help. The SCMSOA’s active number of officials is between 50-60 and probably closer to 50, with a core of about 30 to 35 officials who do most of the high school games.

“There were a couple of times last fall, where Jerry Baerg wasn’t able to quite fill everything that was needed, mainly Tuesdays and Thursdays — Saturdays there’s usually a few more people — but Tuesdays and Thursdays he had trouble finding people,” Fluegge said. “His goal is to always have three for varsity and there’s two usually for J.V. [Junior Varsity] and freshmen level. Sometimes you had two officials doing everything.”

Two-time ACC player of the year Etienne returning to Clemson